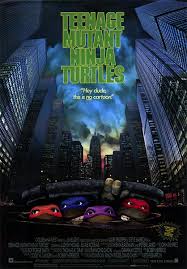 The dialogue and humor might be terrible, but for nostalgic purposes and effort alone, this movie happens to be a good bit of dopey fun.

There’s nothing great about Teenage Mutant Ninja Turtles the movie, except for maybe the effort that’s put into it. To put it mildly, it could have been a lot worse. The tone is dark and the creatures are real people wearing real costumes (as opposed to computer generated images), and those two things go a long way. The story line is just okay, with the turtles getting attacked three different times by the evil foot clan, but it’s the human story element that is actually the most fun. There’s this mystery gang working the streets, and we even get to meet a kid who is in the gang and see the situation through his eyes. The action here isn’t anything special, and both the humor and dialogue are pretty lousy,but still, the movie ends up being kind of fun, in a very carefree way.

Teenage Mutant Ninja Turtles was a fun and goofy little comic book turned into a cartoon TV show. This was back in the late eighties. It caught on with the public big time, and the toys and show became massive moneymakers. Then they decided to make a movie, then another movie, and then another movie. This first one, made in 1990, is the best of the bunch, simply because it tries to go dark and seem ominous. It’s not a good movie, simply because the annoying humor keeps getting in the way of any potential it might have, but it definitely deserves credit for trying.

The film starts out with a new report by April O’Neil turned montage of teenage criminals in the streets grabbing people’s wallets and television sets before handing them off. The actual content of what we’re watching isn’t much, but the way it is filmed, with catchy music, quick cuts, and April’s voice over, all work nicely. Sure there’s the fact that April says there have been no eye-witnesses and then a second later we see an old woman spot the guy who stole her TV running away (thus making her an eye-witness), but so what?

At the end of the report, April goes outside and is about to be mugged when the turtles save her. Only we don’t see them because they break the light bulb. We only see a weapon or two. Like the said that is thrown at the bulb to break it. A few moments later, the police arrive to find the criminals all tied up. We see a manhole cover being lifted and the eye mask of one of the turtles looking out with the police lights flashing on it, lighting it up for us. All of this is great. The way we don’t see much of the turtle really increases our anticipation. It’s a terrific opening.

But then we move to the sewers and meet the turtles as they are celebrating their victory, and suddenly everything is revealed. The music is still catchy, but the humor kicks in and boy is it stupid. The turtles basically walk around trying to think of other words for cool. “bossanova?” “Chevynova?” this is dumb stuff. they get into their hideout, off the path of one of the sewer tunnels, and we meet splinter, their master, who is a giant rat.

Now something has to be said about the puppets and costumes here, because they’re pretty great. this is Jim Henson, top of the line stuff. This was, of course, an age when computer effects weren’t being used yet, and so everything we see is practical. That means that while they don’t exactly look realistic, they look a lot better than computer drawings. At least we know that someone was actually there, in costume, dressed up like that. with computer renderings, the characters never even feel like a person was involved.

The story is pretty weak. It’s basically a series of back and forth events with the gang of teenagers known as the foot clan, which is led by shredder. The Foot Clan dress up in masks where they can only see through one of their eyeholes, a strange design that is meant to make them look more menacing, but isn’t really practical at all. When April continues to do stories about this crime wave, The Foot Clan is dispensed to put a stop to them. They attack her on a subway platform and Raphael (one of the turtles) saves her. He then brings her back to the sewer hideout.

This is the single event that causes all the trouble of the movie. A Foot Clan soldier follows Raphael in the subway tunnel, which turns into a sewer tunnel (how convenient), and leads directly to his home. Now the foot clan knows where the boys live and when they go over to April’s to hang out with her, The Foot attacks their home and kidnaps master splinter. So starts the rest of the movie, where they have to get splinter back.

Only the boys never go after the foot and attack their home. this might have been a better movie if they did. Instead, the foot clan attacks them again. this time it’s at April’s apartment while Raphael is on the roof. What’s with this one turtle being singled out as the only one who gets scenes away from the group? Raphael is given a lot of personality here, (he’s rude, he’s depressed, he’s got a temper), but unfortunately he’s the only one.

The turtles go into retreat mode for a while, with Raphael recovering from being attacked. This section of the movie, with the whole group (including April and a vigilante named Casey Jones), recovering at April’s parent’s upstate farm house, feels a little like taking a nap in the middle of a day, in between a morning of activity, but before going out for the night. The turtles keep to themselves, Raphael sleeps in a tub, and it’s all kind of quiet. Consequently this is one of the better sections of the movie. That probably has a lot to do with the fact that their are now corny jokes flying around during this segment.

When they are good and ready, the turtles return to their home in the sewer, and would you believe it, they are attacked by the foot clan again. Shredder accompanies this time the foot, himself. Last time, in the apartment where Raphael was on the roof, they were accompanied by a fat ninja in a black robe ( a guy doing a sort of henchman imitation of Odd Job from Goldfinger, minus the hat and with a lot of grunting noises instead.) They slowly work their way up the side of the building until the reach the roof, which is where Shredder just happens to show up for the climax. The action throughout the movie is pretty lousy, and that’s one of many reasons why the movie doesn’t have much to offer. Another one is the plot. still the attempts at going dark really help push this film along, and say what you want about the film, but it definitely has style.