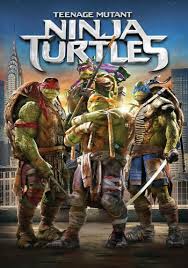 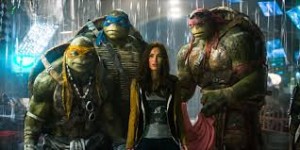 About fifty times better than I expected, this movie might be Michael Bay – produced, but it still gets both the tone and action right. If only the same could be said about the story and humor.

This movie is fun without being anything special. It goes without saying that some of the ideas here will be dopey. After all, this is the movie about walking, talking, butt-kicking turtles. But you know that going in. What you don’t know is that this movie gets the tone and action down, just right. Sure, it’s all computer effects, but it looks pretty great. The plot and humor might be weak, but the movie makes up for that in other ways. Visually this thing is pretty impressive, and despite its shortcomings it never loses our attention or interest.

The new movie Teenage Mutant Ninja Turtles was surprisingly pretty decent. These are lovable characters who haven’t had a worthwhile big screen film since their original movie debut (a film which shares the same title as this movie), back in 1990. There have been plenty of attempts since, including an animated film titled TMNT from a few years back. But it’s this movie that generated enough talk and money to really get the ball rolling again. There’s already a sequel in the works. And the good thing is that this first movie in the new relaunching of the series is actually pretty  entertaining. If all of these remarks sound like back-handed compliments, that’s because they are. I wasn’t expecting much here, mostly due to the movie’s producer, Michael Bay. Here’s a guy who was once a master of the over-the-top American action movie. His films Bad Boys, The Rock, and Armageddon were all a lot of fun. But then Bay was handed the Transformers franchise and he just got worse and worse as a filmmaker. He made four movies out of that series, and only the first one was even moderately watchable. This is a guy that takes big budget special effects and absolutely abuses them.

Luckily, he did not direct Teenage Mutant Ninja Turtles. As a producer, he was just far enough away to not impact the movie negatively. That’s because the tone or mood of the film is pretty much on the nose. It’s dark when it needs to be, and very stylized. (not that any of the jokes are great, but at least the failed attempts at humor don’t take us out of the film.) In the first twenty minutes alone, we don’t see the Turtles at all. That kind of restraint and setup is  something that one would never expect from Bay. This movie uses computer effects well, in much the same way that Dawn of the Planet of the Apes did. That means showing us action from low angles, (instead of giving us a full, clear picture,) or having images be out of focus on purpose. The reason for that is to make the movie feel as if these things were really being filmed (not computer graphics,) and that the camera went out of focus, kind of like in an indie film. It works.

The first twenty minutes of the film are what really establish the movie as something kind of decent. It’s where the audience makes up their mind that this film is actually not bad. During this time, the film introduces us to reporter April O’Neil and the problem of the Foot Clan crime spree (which is exactly how the original 1990 film began.) From there, we follow April as she chases after news stories about the Foot Clan. She goes to the docks when a drop-off is taking place, and sees the Foot Soldiers get their butts kicked by creatures who operate in the shadows. Then she runs down to a subway platform where the Foot Clan have taken hostages, and once again, she’s there when the Turtles attack. Once again she is unable to really  see anything. At this point April climbs up to the roof and we get our first look at the guys in green.

These computer generated creatures actually look pretty cool. Sure, they are fake as hell, but we’ve seen the best of what practical costumes can do for the characters. Jim Henson, himself, was behind the costumes in the original film. It doesn’t get better than that. So why not try something different. These computer effects used here are really detailed on the faces of the characters and that goes a long way. The Turtles playfully threaten April that they know who she is, so she shouldn’t go telling people about them. Then they return to their home, and we are finally brought into their lives. It might sound like the wait has been unpleasant, but the truth is, the setup really works. The more we don’t get to see the Turtles, the more they are shrouded in mystery. The setup builds our appetite, and the strategy ends up panning out.

Regarding the look of the turtles, themselves, each one of them is given a very distinctive look, more than just the different colored headbands. Rafael and Michaelangelo seem to be like black rap stars. Ralph wears a durag cap and Mikey wears gold chains around his neck. They talk that way too. Donatello has the taped up nerd glasses and Leo’s got a wooden breast plate, like an ancient samurai warrior. The little details (like Ralph having a scar near his mouth, and always chewing on a toothpick,) actually do help. This movie definitely took its time to get the details right. You can’t even compare that to the Jim Henson 1990’s costumes, where the four turtles really did look all the same.

Once we get into the Turtle’s home, in the sewer, we meet The Splinter, the father-figure and sensai of the Turtles. He looks pretty terrible here. I have no problem with the way the character moves, whipping around his tail to use it as a weapon and being more agile, at times, than the Turtles themselves, but my problem is with his face. He’s got this gigantic Fu-Man-Chu mustache that looks totally ridiculous. On top of that, he doesn’t have the old man Japanese voice that we have come to expect from this character, and instead, sounds completely American. Still, at least his movements and action scenes are cool.

The story about the Turtles and the corruption that caused them to be created is pretty weak. It involves April’s father, who worked alongside Eric Sachs, (William Fichtner.) The two of them were scientists who tried to do genetic mutation experiments on animals. O’Neil’s father died, and Sachs took over and became more and more evil and corrupt. If this isn’t the same exact story as The Amazing Spider Man, (Andrew Garfield’s first film as the character,) complete with experiments on animals and turning them into humans, then I don’t know what is. To say we’ve seen it before is an understatement. The only positive about it is that Sachs is not the only villain. There’s also The Shredder, who leads the Foot Clan, and works as a partner to Sachs.

The Shredder looks amazing! Talk about visual art. This guy is half-robot, half Silver Samurai (from the movie The Wolverine.) At least he looks that way anyway. He is covered in sharp, razor-like daggers and knives and metallic pointy things. It seems like you would get cut just staring at him for too long. And yet it’s his action scenes that are the problem. Whereas I liked Splinter in action, but hated that character’s look, here it’s The Shredder in action that is the mess. Of course his action is all CGI, but that’s not the problem (after all, Splinter’s was all CGI as well.) The problem is that for everything the Shredder seems to have going on with his outfit, it seems like none of it can actually hurt the Turtles at all. At one point he shoots a bunch of daggers out at them,  by lifting his arm up, and of course they block or dodge every single one of them. What’s the point of having a character who looks this insanely threatening if none of it can harm the heroes in any way? It also doesn’t help that the shredder is exactly the same size as the turtles, (shouldn’t he be bigger?) and seems to have a robotic voice coming from inside his costume, like a transformer. He even looks like a transformer, with not a single bit of his human flesh uncovered. Not even his eyes. This dude is robot all the way, and it is clearly Bay’s hand at work here. Not surprisingly, it is one of the only elements of the film that doesn’t work.

Then there’s the humor. It’s not terrible, but it’s not very funny either. Will Arnett is on hand here, strictly for comedic purposes. He’s playing Vernon Fenwick, April’s cameraman and driver. All of his banter is pretty much with her, and it’s generally pretty dopey. He’s the fool of the movie, and it’s a shame that he’s pretty much wasted. His one, on-going, joke is that he thinks April is really hot.  The Turtles themselves aren’t much funnier. There are fart jokes in this film, which is never the sign of high intelligence (you won’t find any of those in a Wes Anderson movie, for example.) One of the only decent scenes that combines cool effects with humor is when Splinter tortures the Turtles by making them spend time in a sort of exercise chamber, known as a Hashi, where each one of them has to maintain a strenuous position for a lengthy amount of time. That scene was kind of clever and fun. We could have used more humor like that.

The film, overall, is okay. The action isn’t great, but there’s a good amount of it that works. Especially in the first half. These moves might be computerized, but they definitely look choreographed and planned out. The computer effects are really used well here to give us some elaborate and intense moments of visceral energy. Sure, it would be a thousand times cooler if we could somehow believe that any of it was actually happening (the way we do with a Die Hard movie,) but even still, the effects are state of the art and have come a long way to the point where we don’t mind how fake they all look. What’s happening in front of us is fun to watch, realistic looking or not. The story and humor are weak, but the film looks great and makes up for its deficiencies in other ways. I am pleased to say that I enjoyed this movie, and that it definitely defied my expectations.