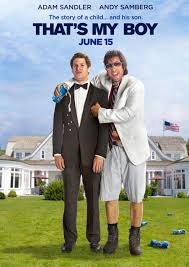 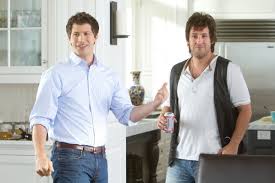 A truly bad movie that has an occasional laugh or two, but is mostly just awful jokes and a lousy, clichéd plot.

A movie that hits every cliché possible while also filling us with some of the most awful jokes and then repeating them. This movie is a mess. It’s got an r rating, and while going that extra mile does work for some movies (the watch worked because of its r rating and Judd Apatow like approach), this movie just feels like every other Sandler film. You can tell this is the actor, Adam Sandler’s brand of humor. He doesn’t care what is working for other comedies around him, he just wants to keep doing the same old thing, and it is incredibly unfunny. The plot is about a long lost father going back to see his kid, on the weekend of his son’s wedding, and trying to get his son to do something for him. It’s a ridiculous story that we’ve seen before, and just a really poor film.

That’s My Boy is awful. I’d like to be able to say that Adam Sandler has sunk to a new low, only I can’t imagine that some of the other recent movies he’s made are any better than this. Between jack and Jill, Grown Ups 2, and this film, that’s my boy actually looked like it might be the best Sandler movie around. After all, the premise did sound somewhat intriguing. A kid gets his teacher pregnant, has a son, and the son grows up to have to deal with his scumbag dad. It isn’t a great premise or anything; after all, everything interesting about it is really in the first few minutes. The story about the kid and the teacher is creative, but after that, this just becomes like any other movie in the world.

How many movies are made about a dad who never knew his kids, suddenly showing up? It’s usually around the time of the son’s wedding, and it’s also usually because the dad owes someone money. I feel like this movie has been done again and again. Another thing this movie appeared to have going for it, however, was a combination of Adam Sandler and Andy Samberg, two Saturday night live alums. Normally we get Sandler and an actress and that’s it. whether that actress is Jennifer Aniston, Kate Beckinsale, Katie Holmes, Drew Barrymore, or Jessica Biel, they are all gorgeous to look at, but none of these women are very funny. at least with Samberg, we are swapping attractiveness for humor.

Only as it happens, we really aren’t. Andy Samberg isn’t funny at all in this movie, and neither is Sandler for that matter. The movie is loaded with problems, but for the most part, it is a combination of a lousy plot with terrible jokes. There are tons of old lady jokes (Adam Sandler both pleasures himself to, and then later sleeps with an old woman), dick and fart jokes, and two different male ejaculate jokes. One would have been dumb enough. Two is just ridiculous. Especially when it is the same joke both times. Either it is the old woman picking up used tissues or it is the bride wondering why her dress is so sticky.

Therefore, the plot is that this father, Donny (Sandler), owes the iris a lot of money. A simple plot device is thrown together as quickly as, he forgot to pay his taxes, or he thought his taxes were always automatically deducted. So now he owes a ton of money and his lawyer tells him he is in a lot of trouble. He has about four days or something to get it all and pay it off. Already we are in major clichéd territory.

Donny goes to a talk show host who once covered him for a show, back when he was seen as a national hero for sleeping with his hot teacher. Now that is another issue. Why is he seen as this hero, on the cover of every news magazine? Doesn’t this stuff happen all the time that an attractive female teacher sleeps with a student? The teacher always goes to jail, and it is a scandal, but is the kid ever an instant celebrity on the cover of mainstream magazines? I guess it has supposed to be funny, and it is an okay joke, but it does not really make any sense.

So Donny goes to this talk show host, and the host tells him that if he can get his son to come to the prison, where Donny’s ex-girlfriend, the teacher, is doing time, and the three of them can have a reuniting there, and the talk show host can film the whole thing for a show, then he will give Donny the money he needs. Therefore, this is now the story of the movie. Donnie has to convince his son, who has not seen him in about ten years, to go to the prison. It is already unlikely because of everything else, (like how the son hates his father), but now throw in that it is the weekend of his son’s wedding. Do you really think he is going to convince his son to go to the prison?

Every stupid joke imaginable comes out of this movie. Donnie shows up at the son’s house and makes up a story about how he knows the kid. His son, Todd (Samberg), goes along with everything. Donny is recognized by the family, (apparently he is still recognized everywhere he goes, even though the sex crime event happened about thirty years ago), and so he tells them all that he is Todd’s long lost friend, instead of letting them know that Todd is the product of that scandal which Donny is so well known for.

We now get into a series of jokes about making fun of Todd. Sure, Todd is well off and works for a hedge fund, and has a beautiful fiancé, but that is all surface stuff. The real character apparently has nothing going for him. He has never ridden a bicycle before and has no real friends. His boss seems to like him, but is really doing things behind his back. Even Todd’s best man says he hardly knows him and was shocked to get the call that he was even being invited to the wedding. Seriously?

As the movie goes on, it continues to hit one cliché after another, and most of them you can see coming a mile away. When a woman at a strip club seems nice and cute, you just know she is going to be the good girl in the movie and that she will have a major part to play later on. The movie does not even know how to keep a surprise hidden away. There are many scenes at a strip club here and a lengthy bachelor party day and night, where nothing very interesting happens at all.

Now there were about two moments in the movie where I laughed aloud, so the entire thing was not awful, but most of it sure was. I also liked that vanilla ice was in the movie, playing himself, and not just popping up for one moment, but actually being a major character. He plays Donny’s best friend. Like most Adam Sandler movies, this one has the usual cameos from some great older actors appearing in one scene. There is James Can and Susan Sarandon here. However, the movie is pretty awful. The jokes just are not funny. For Adam Sandler, his days of good movies like Billy Madison and Happy Gilmore are nearly twenty years behind him. His days of finding funny ways to use old ladies, like he did in The Wedding Singer, having the woman rap, have now turned into pathetic jokes about him sleeping with these old women. Sandler made one interesting movie in the last fifteen years, and that was Punch Drunk Love. It was dark and different. If he has any chance of pulling out of this mess, it is to try making more movies like that. Something tells me he will not.