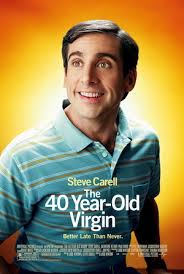 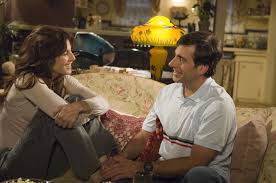 A funny movie about sexual frustration and the way guys view sex and talk about it when around each other.

The 40 Year Old Virgin is about a guy who has never had sex before. The catch is that he’s forty years old. And he is extremely sexually frustrated. The movie is packed full of montages that show one flash moment after another about how this all happened and what it lead to. Sometimes the moments show the main character, Andy, hanging around his apartment on a Saturday night, doing all sorts of activities. Other times it’s more about the reasons why Andy never had sex in the past, including him having all kinds of accidents in the bedroom.

And while all of these montages are funny, the story is really about where this guy is today, working at an electronics store with a bunch of guys who want to help him. At the start of the movie, these guys aren’t even his friends. They don’t know him at all, and have had only the most brief of conversations with him, and some of them even think he might be a serial killer.

But all of that changes when they invite him out to one of their poker games. The game takes place in the back of the store, after hours, and it turns into a conversation about sick sexual stories. One of the guys, jay, is married and cheating on his wife. Another one, cal, is the single one who is the most freaky and adventurous. And then there’s David, who is the quietest of the three friends. That’s because he just got dumped by a girl who he is still in love with and can’t stop thinking and talking about. He’s the romantic of the group.

But when Andy lets on that he’s a virgin, by not being able to keep up with the guys and their stories and by guessing that a boob feels like a bag of sand, there is no turning back. at this point, even David jumps in, asking questions and trying to understand how this could have happened. the boys suddenly declare it as their mission to get andy laid. this is not very far off from the declaration of all of the high school friends in american pie to get laid, or from jonah hill and michael cera talking about it before their night of adventure in superbad. “you know that mistake girl’s make where they say, ‘i can’t believe i slept with that guy?’ we could be that mistake.”

the first half of the movie is about the guys. it’s the better half. each one of these friend characters is a lot of fun in his own way. each one has his own personality and motivation for helping andy. and these guys are loaded up with ideas. jay, in particular, seems to be the one who takes andy’s situation personally. that’s because he is a sort of sex addict and can’t even fathom that this could have happened to his friend. he sees it as such a waste of years that andy could have been getting laid again and again.

it is jay who has the idea to take andy to a waxing spot where the asian girls working there practically torture the guy. it is also jay who gives andy the speech about the lion and the gazelle, which really isn’t all that far removed from the swingers speech vince vaughn gives john favreau about being the bear and not the bunny rabbit.

while jay is loaded up with all of these ideas and throws them at andy like they were dodgeballs, cal has a different way of approaching women. he teaches andy to ask questions and be mysterious. “be david caruso in jade.” and andy pulls it off perfectly in his scene with beth at the book store, not only choosing his words carefully, but also the way he says each line.

while the first part of the movie is about the guys, the second part of the film is about andy starting up a relationship with a single woman. that woman is trish, played the great catherine keener, and she’s not your typical, young, hot romantic lead. in fact, all three of the other guys walk away from her when she first tries to ask them a question. but for andy, she’s just perfect. totally understanding about his situation. at least once she finds out what it is.

the movie is kind of a journey for this guy to find the right person to have sex with. he tries out drunk chicks at clubs and ends up dealing with the consequences. but even when he finds the right person, things still aren’t so easy. in one of the many great scenes of the movie, andy takes trish’s daughter (kat dennings in her first recognizable movie role), to a planned parenthood building and asks questions to the woman running the program. he also studies the anatomy models. this is a very funny movie with some great ideas. it even has lots of comments about other movies, from dawn of the dead to the bourne identity. there’s a reason why judd apatow movies are so good and so original, and it all starts with the 40 year old virgin.