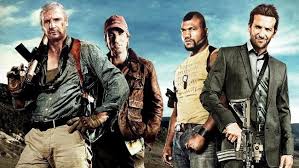 Not very organized or intelligent, it’s okay on a first viewing, but instantly becomes terrible after that.

This movie is okay, and watchable, but it’s not much more. the a team tries to combine humor and action, but it isn’t especially successful with either one. sure there are some jokes, but mostly this is trying to be an action picture, and so the movie tries to be serious when it probably shouldn’t. the action and plot aren’t all that great either. the plot is either routine and cliched (the team of mercenaries who have been setup and now have to prove it), or it’s too tricky to follow (the whole business about stolen plates.) there are some decent action scenes, but the computer effects are weak, and there is nothing really great going on here. this movie might have been better if it took the starsky and hutch approach and got comedic actors to have fun with the ideas.

The A Team is the movie version of an 8os t.v. show that was intentionally campy and over the top. It was made into a film mostly because of name recognition and because of characters that some people remember. In particular, there was Mr. t’s character, named b.a. baracus. He’s played in this movie by a wrestler who is just average in the role. that same can be said for about pretty much everyone and everything that has to do with this movie. i saw it for the first time in theaters and enjoyed it. then i saw it again on dvd. What a mistake. It suddenly plummeted into a terrible and incomprehensible mess. I couldn’t believe I was watching the same movie. Never has my opinion of a film transformed and dropped so much, and so quickly, from one viewing to the next.

To start off with, this movie should have only been made if it could have been done in strictly a comedic way. the show was campy and so a campy director should have been brought in to make the movie. someone like sam raimi. A Good example of how this could have been done right is the 2004 film version of starsky and hutch. that was another movie based on an intentionally corny 80s action tv show, and that movie went for actors like ben stiller, owen wilson, and vince vaughn, to give us more laughs than anything else. the action was just a bonus. and the storyline really didn’t matter. it was simple and it worked, but we already had more than enough going on with the comedy. and so a diversion to a disco club, for example, really didn’t hinder the story, (even though it had nothing to do with the case the two detectives were on), because it was still humorous and fun.

Unfortunately, the A Team goes the exact opposite route. there’s humor in it, but it’s slight, and not especially funny. Mostly this is an action movie, complete with a fairly complex criminal heist plot that takes itself way too seriously. yes, there are ridiculous stunts that are meant to be more silly than realistic (a falling tank has characters fire off rounds while in the air, hoping this will move the tank over so that it lands in a lake). but these moments mostly come during action scenes as opposed to being a regular part of the movie’s tone.

The storyline is about a four man team that works for the military, but really carries out it’s own missions according to the plans of their leader. that man is hannibal, played by liam neeson. a fine actor to be sure, neeson has had great success with trying different kinds of films over the last ten years or so. love actually was a terrific romantic comedy, and taken was a hardcore action movie. but the a team is more like a throw away film. it was made because it could use the name of the t.v. show and not because there was a good script there, or really any other reason at all to make it.

The plot has these four guys (Neeson, barakus, and bradley cooper along with the guy from district 9), watch as a heist goes wrong and valuable plates are stolen. Now, their team is being accused of being the ones who did the stealing. this is about as unoriginal of a plot as you get. i just saw the exact same thing a couple of weeks ago with a movie called the losers. so now it’s the mission of our guys to catch the bad guys, set the record straight, clear their reputations, and redeem themselves.

Part of the problem with the movie is that it can’t decide what it wants to be. is it an action movie or a comedy or a serious mystery? The film is so disorganized that i’m not even sure the producers know. to go back to starsky and hutch, there’s no doubt in my mind that that movie was a comedy first. just like tropic thunder. the action and storyline are then built in around the comedy. not so with the a team. It’s probably an action movie more than a comedy, and that’s where it goes wrong. since it’s not willing to go all out as an action, and pull no stops, the way something like taken did, it’s already giving itself a disadvantage in that genre.

And while the action might occasionally be kind of cool, with B.A. sliding down the side of a building and things like that, more often than not, it just doesn’t hold up. it all happens so quickly that even the cool stunt work is over before you can appreciate it. the amount of action scenes in the movie are fine, but there’s not a one of them that is actually memorable at all. maybe the falling tank, but that’s it. and it’s incredibly fake looking.

As the movie goes on, an old flame pops back into face’s (bradley cooper’s) life in the form of jessica biel. that’s another major cliche right there, especially since she’s working for the fbi task force team that is assigned to take them in. biel has absolutely nothing to offer to this movie. not that any of the acting is special at all, but she makes it feel like she’s barely in it, even if that’s not actually the case. in other words, her character is pointless and completely cliched, and she’s just there for eye candy. because there’s gotta be a girl in the movie.

And aside from the basic story about these guys trying to clear their name, the different act by act structure of the narrative has very little going for it. we start out in the desert as the guys drive from one place to another to rescue each other, and watch as many of the team members meet for the first time. there’s a lot of trying to escape from being a prisoner going on here at the beginning. both hannibal and face find themselves in situations like these. the guys get out of their jams, join the military, watch a job go bust, and now they’re back in front of a judge, being sentenced to prison again. which means they have to be busted out and escape again. and so they do. by the time all of this repetitiveness is over, the movie is already heading for the ending.

The ending of the movie is as confusing and annoying as anything else. with fireworks exploding into the air, giant containers being moved and switched back and forth on the docks, and plenty of falling boxes and explosions, it just goes to show how disorganized and overboard this movie really is. it was directed by joe carnahan who made narc and then smoking aces. Narc was pretty good, but it wasn’t especially original, borrowing it’s core story from rashomon. and smoking aces was just dumb. with the a team, he had a real chance to show the world he was better than his competition, and he was unable to pull it off.