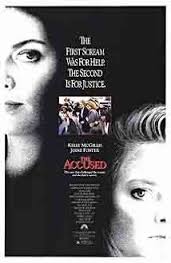 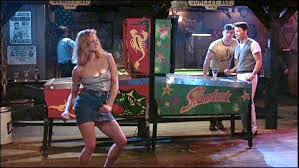 A pretty intense movie that keeps the surprises coming as it changes the course of it’s path about halfway in.

A very unusual movie about a rape situation and then two different hearings that follow it. The film is smart in the way that it keeps the audience on its toes, never knowing what might come next. When the first hearing ends, for example, and a deal is made, there is no telling what direction the rest of the film will go in. This approach to keeping things from the audience ends up paying off even more as the film goes on. It carefully layers things and tells you just what you need to know before pulling some pretty cool moves out at the end. In some ways, this film is a mystery that builds up gets better as it goes on. There is certainly a lot to work with here, and the movie is uniquely different from anything we have seen before.

The Accused is a pretty good movie. For one thing, it’s different. There aren’t a whole lot of movies about rape cases and of the ones that there are; there aren’t many of them that are sort of a mystery. On top of all that, this is a trial movie and it’s a film that changes its course halfway through, to be about a whole new angle. That’s a great move. It keeps us on our toes. And there’s even more surprising things still coming.

The movie might sound routine or done before from its initial premise, but in actuality it is anything but. It’s not about a nice, innocent girl who is raped, but about an alcoholic, flirty wild girl from the wrong side of the tracks. Everything about this case says that maybe she wasn’t raped at all, and I like that angle. There is uncertainty.

The woman in question is Sarah Tobias, played by Jodie Foster in her first major adult role (she was just a teenager in taxi driver.) one thing interesting about this movie is that in the opening credits, Kelly McGillis, who plays Sarah’s lawyer is listed before Sarah. That’s because mcgillis was the bigger star at the time, having just come off top gun a few years earlier. That movie, of course, was a monster success, and foster wasn’t really known yet. But there’s no question about it, foster has the bigger part, and this is the first movie of hers that really showed how talented she was.

At the start of the film, we are outside the bar as Sarah comes running out, dress torn and hanging half off, face and absolute mess. She runs to the street in tears, hitchhikes a ride out of there, and gets brought to a hospital. That’s where the police and a lawyer are called. The lawyer let’s the tests are done and samples get taken, but then she whisks Sarah off to the bar. She wants to take her client back to the scene of the crime as quickly as possible, just in case some of the rapists are still hanging around.

And sure enough, some of them are. McGillis’ character, Kathryn Murphy, grabs the bartender ad questions him about the events going on in the next room and why he didn’t do anything. The bartender assures her that he had no idea what was going on, but between him and Sarah, they are able to get enough to find the three guys who raped her and get them locked up. Now comes the hard part, proving they were guilty.

As Kathryn and the lawyer who is representing the boys prepare for trial, Kathryn realizes how small of a case she has against them. Sarah makes for a terrible victim to have to put on the stand. She was drunk that night and promiscuous and doesn’t seem to be the most classy or most self-aware. And on top of that, there are no other witnesses who will take her side. Even Sarah’s friend, who is the reason why Sarah went to the bar that night to begin with, can’t offer anything up that, will help Sarah’s case.

That’s when Kathryn makes a deal with the opposing lawyer, the boys get a minimal sentence where they will serve a number of years in jail, but not very many, and the book is shut on the case. Only it isn’t. That’s because Sarah isn’t happy with these results and feels like Kathryn sold her out. She feels like Kathryn was so embarrassed and not confident about whom her client was, that she just made a deal to get it done with. And Kathryn agrees with her. She knows that she never gave Sarah the chance to speak for herself.

This feeling of regret and guilt that Kathryn is having combines with a scene where a guy runs into Sarah at music store and harasses her. This guy says that he knows her from somewhere, and then tells her that he was there in the bar that night watching “the show.” he laughs about it and is incredibly hurtful, and Sarah ends up ramming her car into his.

But she also gets an idea. Maybe they can go after the people who watched. And that’s exactly what they do. These are people who did more than just stand around gazing over. These are guys who instigated the whole thing, cheering it on, and shouting at other guys to get in there and rape her. These are the guys who were standing on tables, getting the other guys to do the dirty work.

That becomes the new direction that the movie goes in. what’s especially cool about it is that we get two major things in the second half of the film that it seemed like we would not get to see at all, when we were still in the first half. The first of these things is a trial. We get to see Sarah testify and Kathryn in court prosecuting people involved in the rape, after all. And the second thing is we get to see the rape scene in full detail. The movie is very smart to hold off on showing us the rape scene until the end. That way, we have already heard all of the details about how it happens, and pictured it in our minds, and have wanted to see it for ourselves. How did these guys cheer them on? How did a nice college kid end up getting involved with those others and raping this girl? The fact that we get to see it all becomes a very cool surprising moment, especially since we never thought we would. The movie is pretty intense and it definitely gets better as it goes on.