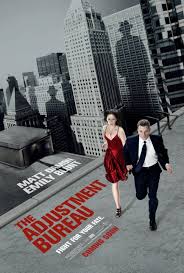 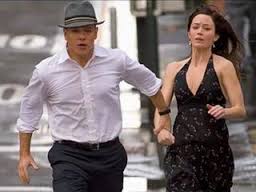 An interesting and often spooky sort of sci-fi movie that falters every now and again, but is ultimately worthwhile.

There’s a cool premise here about a mysterious organization that hides behind the scenes of life events, secretly pulling the strings. These guys dress in trench coats, wear brimmed hats, and hide in the shadows. When they try to stop a relationship, between a young couple, from forming, we get our story. But the movie doesn’t really have a whole lot of places to go after that. This film does a nice job of creating a mysterious future world like Dark City or The Matrix, but as it goes on, it starts to wear out. It ends up feeling more like The Forgotten than those other movies, with a storyline that turns out to be just a little too thin.

The Adjustment Bureau is a kind of cool sci-fi movie that creates an alternate reality inside of our own world and is smart enough to explain all the new rules. It’s A movie about a man named David Norris, who is running for New York state senator. David finds himself getting mixed up with some strange men who apparently control the decisions that we make, and control our future. And David keeps challenging them and trying to find out more about these mysterious people.

At the start of the movie, David is in a heated political election, which he loses after some embarrassing  photos of him are released. While in the men’s room on the night of his loss, David meets a beautiful and charming girl named Elise, played by Emily blunt. They hit it off and kiss and David walks out of the bathroom to give the best speech of his political career.

The movie lets us hear this speech, which is all about how everything is chosen for David and tested by focus groups first, to decide the perfect tie he wears or the perfect amount of scuffing on his shoes. It’s a good speech, telling us what too much scuffing signifies or not enough scuffing signifies and explaining what each tie color supposedly represents. The point David is making is that all of this is ridiculous. And the audience loves him for saying it. If he took it further and started making the people who worked with him mad, this might be getting into Bulworth territory, but the movie keeps it realistic and believable, and as a result we get a really interesting speech.

And then there’s a guy dressed in a trench coat and hat who is instructed by another guy dressed the same way (John Slatterey of TV’s Mad Men), that David needs to spill coffee on his shirt before a certain time. It is up to this man to make sure it happens. The man who needs to make the coffee spill happen ends up sitting in a park and falling asleep, and when he wakes up, it’s too late. He sees David getting on a bus and then the bus pulling away.

To the men in the trench coats and hats, two bad things now happen as a result of David getting on the bus. The first is that David runs into Elise again. He was supposed to never see her again. The second is that David gets back to the office early enough to see that everyone he works with is frozen, and those mysterious men are in the office using a machine to scan the faces of David’s coworkers.

There’s a chase around the building and When the men catch  David, they sit him down and explain everything. They explain who they are, what the rules are, and that David cannot tell anyone about this. They tell him that he can never see Elise again, and David freaks out. This is where the movie first starts to get a little silly. Everything else, from the great speech, to the guy falling asleep in the park and missing his job, to the frozen statues of David’s coworkers, was all pretty cool. But now we suddenly get this sort of idea that love is more important than anything else, including David’s career, and it seems a little trivial. Like would David really be so cool with these people in the office, from what he saw them doing? It is only the talk about Elise that sets him off.

Luckily, movie is smart enough to have more to the plot than this, and to allow itself to keep unfolding. Another movie might have just used this as the premise and let it’s storyline kind of stop there, never really progressing. It would say that these mysterious men are going to keep trying to stop David and Elise from being together, and David and Elise are going to keep trying. It would turn into just another action movie. But The Adjustment Bureau has more up its sleeve. It’s sci-fi and that means it’s got avenues to get creative if it chooses to follow them. This movie does. It reminds me a little bit of the Julianne Moore movie, The Forgotren, in the way that the story involves strange people who are trying to manipulate the way we remember and think about things.

One thing great about The Adjustment Bureau is that it explains to us exactly why David can’t be with Elise. At first David pries and even convinces himself that the guy telling him doesn’t know why, but then he keeps pursuing an answer and eventually he gets one. There are many more twists still ahead. We find out how in a past version of “the plan,” things were different. The movie has a way with unspooling more and more plot points as it goes on. It never settles and instead keeps building and expanding.

As the storyline goes on and things start to get more out of control for the men who manipulate the future, they call in a specialist, played by Terrence Stamp. He’s a man known as The Hamner, and he takes things a little further, actually making bad things happen to David and Elise. All of this is enough to cause David to have to rethink his position on whether or not the two of them should be together, and in doing so, the movie kind of falls into a clichéd formula where the couple separates and then gets back together for a final pursuit. This paint by numbers ending is formulaic and generic to romantic comedies more than anything else. In The Adjustment Bureau, at least it’s a little better than usual because David has learned the rules and is now into the whole sci-fi game himself. Still, it really does boil down to just a better take on the same climactic chase idea. It’s a small loss in the movie that was mostly pretty cool.

The Adjustment Bureau has a lot going for it. It’s a movie that creates a secret world behind the world that we knew existed. It has the character dig deeper, and deeper into what that world is all about. It’s a more grounded take on movies like the The Matrix or Inception, or even Dark City.  These are all great movies and to be in the same company with them is quite the accomplishment.. But the movie is just a little too much about love. There are certainly flaws here, some more important than others (these people don’t even get a name, or a nickname as opposed to Inception, which had names for every different position.) But still the movie continues to unspool new twists and revelations on us and that goes a long way to furthering the plot. By the end the movie tries to hint at bigger questions, like who makes the plans and are they looking for god or something. But none of that is ever made clear to us. Instead, we get an ending that feels way too neat and simple, and considering how elaborate everything else was in the movie, it’s kind of a letdown. The Adjustment Bureau is a good movie, and definitely something different, but it sort of caps off the creativity by the end, and falls into familiar territory. Despite this misstep, there’s still plenty here to appreciate.