The Adventures of Tintin ** 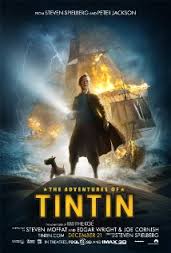 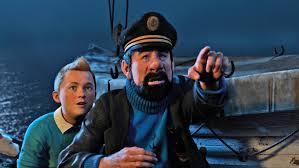 The Adventures Of Tintin is a technically magnificent movie. It’s like the mummy meets the pirates of the Caribbean movies, except for no monsters or skeleton ghosts of any kind. Surprising that makes a big difference. The action is fun and exciting, but the storyline is pretty dull. And after we get the hang of what they’re doing with the action, and get used to it that becomes routine too.

The movie was directed by Steven Spielberg, and while he’s directed countless adventure movies such as the Indiana Jones films, an been the head of a studio that made all kinds of animated films like Shrek and the prince of Egypt, he’s never directed his own version before. This is new territory for him, although his buddy Robert Zemeckis has been at it for years (The Polar Express, Beowulf.) it’s also not too far off from what another friend of his, George Lucas, was doing with the new star wars movies, filling them almost completely at times with cg characters.

And Tintin looks fantastic. I saw it on a plane, which has got to be the worst possible situation to see this movie in. imagine seeing it on a big screen or on a big screen in 3D! The camera shots swing around and into the action, getting angles that would never be possible for a real, live action movie. It’s kind of like the new Rise Of the Planet Of The Apes film in that way. The movie was made using CGI monkeys instead of real ones simply because computers enable the monkey to do so much more and also for the camera to be able to follow the monkey around better.

There was a scene in that movie where the monkey, Caesar, climbed up to the ceiling of a house and swung around on the chandelier and the camera followed him the whole way. That wouldn’t be possible if he wasn’t CGI. The same can be said for plenty of shots in Tintin, such as an early one where he is chasing after a wallet thief and ends up falling into the middle of the street as cars go whizzing by. The camera dives in and out of where Tintin is as cars come flying right at him, beside and over the camera. It’s pretty amazing.

There are other cool action moments in this movie too, such as a sword fight on a pirate ship with characters swinging around on ship masts and walking through flames. All of it reminded me a lot of the pirates of the Caribbean movies, and while those movies did rely on a ton of computer effects and CGI character, at least they were live action films. A movie that is completely CGI just takes you out of it a little because you know it’s all fake. There’s no debate about what is fake and what isn’t like there often is in live action movies that use computer effects today.

The story is what really hurts this movie more than anything else. Tintin buys an old model of a ship early on. Right away two different people come to buy it from him. The first tells him he’s in danger if he doesn’t get rid of it. The second isn’t so nice. He’s a villain, voiced by Daniel Craig, although the character doesn’t sound like or look like Craig at all. Back when they started making CGI movies like Antz (for Dreamworks, the studio that Spielberg was running,) they would make the characters look like the actors. There was a Stallone ant, for example, that looked just like him. That was a pretty neat strategy, but unfortunately it was abandoned and Tintin is a movie that doesn’t use it at all.

Simon Peg and nick frost are supposedly also in this movie, voicing the characters of Thompson and Thompson, two bumbling detectives who can’t catch a criminal even when he’s confessing right in front of them. You would never know that it’s Peg and frost voicing these characters though, which is a real waste of the two iconic buddy movie actors. Both of the Thompson characters sound exactly like each other (which I suppose is the point, although not a very smart one), and neither one of them sounds like Peg or Frost.

One night the man who warned Tintin that he was in danger shows up at Tintin’s doorstep and is shot down. Then Tintin notices his ship model is missing. He goes and finds the people he thinks took it, only they don’t have the piece they need because it actually dropped out o the boat while Tintin was holding it in his house. Having that piece leads them to capture Tintin and bring him onto their ship as the villains sail off to sea.

Now Tintin meets a drunken captain on the boat and spends way too much time locked up with him or free, but just wandering around the boat trying to find answers. The boat scenes take way too long and are very dull. Whatever this movie had going for it before the characters set out on the boat is quickly eliminated once the boat ride begins. It reminds me of the dull boat ride to the island in peter Jackson’s remake of King Kong. The captain that Tintin meets on the boat is voiced by the same actor who posed as a captain on the ship of that King Kong movie too, Andy Serkis. Coincidentally, he’s the same guy who did the CGI modeling for Caesar in the rise of the planet of the ape’s movie as well. Serkis is all over this cg animated movies, and he’s good at what he does, but he has nothing to do with the plot of the movies.

The adventures of Tintin doesn’t get any better as it goes on. It’s plot gets tiring and it’s effects might be cool, but their freshness wears out. The storyline brings in some back history about the captain and some past enemies that he took on while aboard the ship, but none of it is really that interesting. If anything, one might say that there is too much action in this movie and not enough attention paid to storytelling. The movie should have been treated like a live action film as far as story, making sure that there were tense scenes even without the action. Then the action should have been used to just add to the excitement, with the CGI making it even better than the usual action movie could do. Unfortunately this movie relies on action and sacrifices it’s plot for it. That’s a big mistake, and Tintin becomes more uninteresting as it goes on.