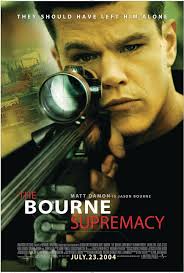 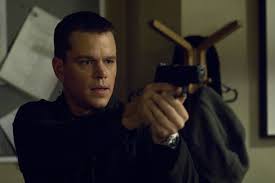 Nearly as good as the first film, this one finds some great ways to continue the same story and also add new dimensions of mystery to it.

The Bourne Supremacy is a great movie, just like its predecessor, and it continues the story pretty brilliantly. It accepts that the CIA has left Jason Bourne and Marie alone and that they have gone on to start a life together, completely off the grid, and then it gives a sufficient reason for why they are brought back in.

The plot is a bit of a conspiracy where there is a conflict between a Russian assassin and the CIA. The Russian assassin (Karl Urban from the lord of the rings movies), kills a number of CIA members and then plants Jason Bourne’s finger prints at the scene. And after that, he comes after Bourne himself. He tries to kill Bourne and while I don’t want to give away what happens even though it’s pretty early into the film, let’s just say he does some significant damage. Bourne thinks it’s the CIA and so he now goes after them. At the same time, they trace the finger-prints, think he’s the guy who killed their men, and they start looking into him. And the Russian assassin, he thinks he’s killed Bourne and so he goes away for a while on an extended vacation.

Meanwhile, we start getting at the heart of the conspiracy, trying to figure out who wanted these CIA members dead and why. Joan Allen steps up to the plate, filling the void left by Chris Cooper as the villain running the show, trying to get Bourne. Only this movie has a smart little trick up its sleeve. It doesn’t make Allen’s character, Pamela Landy, a villain at all. She’s the one heading up the investigation and trying to find Bourne to be sure, but since Bourne was falsely framed for the murders, she’s really just trying to understand what happened. She’s like Tommy Lee Jones in The Fugitive. He might be the enemy of the protagonist, but he’s hardly the bad guy.

And there are plenty of other bad guys to fill the void. Aside from the russian assassin, the real mystery is tracing his connection back to america and figuring out who hired him and why. Landy, in her investigation of treadstone (the division of the cia that hired and trained bourne), starts to go see characters from the first movie. Brian cox, who headed the division with chris cooper, is brought in. So is julia styles, who worked for them, monitoring the assassins and their assignments from an office in paris, france.

Like all great sequels of the best trilogies (star wars, the lord of the rings) this movie is the darkest of the three. the bourne series was gritty to begin with, but this movie is filmed with mostly grays and blues, which brings it down to a whole new level. It’s largely set in berlin, germany and moscow, russia, and those cold countries are a large part of why the movie looks this way. The first location we find bourne in is goa, india, and this country is all yellows and oranges. that’s because this country serves as a sort of bridge between this film and the previous film. The first movie, the bourne identity, was all yellows and whites. Goa, india connects this movie to that one until the assassin comes after bourne. At that point, we are suddenly and violently propelled into the darkness of this movie.

One thing that i love about The Bourne supremacy and have admired since the very first time i saw it is the way it really connects the storyline to the first film. Not only are the events in the first film spoken of and gone over as Landy reviews what this whole treadstone operation was all about, but we actually go deeper into the mystery of what chris cooper and brian cox were all about. And that’s especially cool because the chris cooper character is dead. One would expect him to not be a part of this follow up movie. And yet he appears (briefly) to help continue his story through short flashbacks. i love that the movie doesn’t just leave him alone and say that it wants to be it’s own thing, but understands that it is part of a trilogy and as such is part of an ongoing story.

Matt damon is the number one reason why these movies work. he sells this character like no other actor in the world could, and he does it by underplaying it. Bourne is not a flashy character. He doesn’t make quips and act extra cool like james bond. Instead, damon’s jason bourne has emotion. The first movie was all about understanding the character and being put into his shoes. It was better than this follow-up film only because it concentrated on the character as much as it concentrated on the plot. We really got that sense of waking up and seeing that you know how to do all kinds of things but you have no memories of who you are.

The Bourne supremacy gets into that a little bit, with bourne trying to figure out why a hotel room looks familiar and when he was berlin before and what he did when he was there. But that’s just one small fragment of the story, whereas the first movie was all about that sort of thing. the sequel, on the other hand, is about this giant conspiracy. The way it uses villains on two different continents and their secret connection to each other reminded me of the great conspiracy in clear and present danger. Uncovering it all and getting to the bottom of it makes this movie as much of a mystery as it is an action film.

The bourne supremacy was directed by paul greengrass who is not a guy that I especially love. As a director, i think greengrass is just okay, and that’s another reason why i think the first movie was better. Doug liman (swingers, go) directed the first movie with simplicity and clarity. His action was all fantastic and well choreographed, but it was also easy to follow. in the bourne supremacy, we again get a great number of action scenes and they are all done well, only because of this director’s very indie roots, he relies way too much on hand held cameras. He goes for shaky camera movements that bounce around as characters are fighting with each other and i understand that it’s meant to make the moment look more real, but is that really a good thing? I would prefer it to look smooth so i can admire the technique instead of trying to figure out what’s going on and who is hitting who.

The action is all pretty wonderful in this movie and i see why some might say that it even takes it up a notch from the first film, but i liked the way bourne went about overcoming his obstacles in the first movie a little better. Just thinking of the simplicity of the corn field scene with bourne toting a shotgun and hunting for clive owen makes me remember what was so great about that movie. The Bourne supremacy, on the other hand, is a completely different film and great in it’s own way. It definitely tells a much more elaborate plot and creates a bigger mystery and puzzle to solve. And it gives us better villains too. Chris cooper was great, but we knew he was the villain the whole time, and there was no surprise there. THe Bourne supremacy, on the other hand, has a very secretive and hidden agenda. It’s a cool movie that really continues what the first movie started nicely, while expanding on it and spinning it into a new direction. This movie delivers.