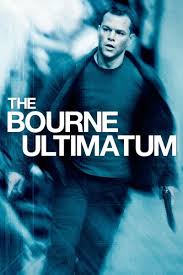 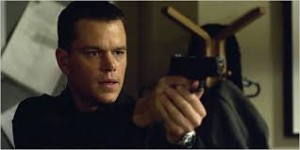 the action and locations are still there, but the storyline is weak and the movie isn’t half as good as either of the first two in the trilogy.

The Bourne Ultimatum is a solid action thriller. The only problem is just how much it drops the ball when compared to the other two movies. With the first two films, there really wasn’t a mistake to be found. They were pretty much flawless. The action worked, but even more so, the story ideas were intelligent and creative. I loved the way the two movies worked together, bringing Brian Cox in from the first movie to become the main villain of the second film. I loved the way it brought back Chris cooper in discussions, to discover new things about him and what he had been up to. And I loved the way it took it’s action and ideas seriously, killing off a sympathetic main character because it kept the movie realistic, even if it wasn’t the most popular or likable decision to make. The third movie does none of this at all. In fact, it very often does the exact opposite.

The second movie, the Bourne supremacy, had a reason why the CIA would be looking for Bourne again after he fell off the grid. There was a conspiracy and framing that was meant to look like he did the crime. In the third film, the reason why they’re going after him is because he’s still on the loose. There’s nothing new that is brought to the surface, and so there really isn’t any reason for this whole thing to be happening at all.

Whereas the second film continued with characters that had been in the first film, making Brian Cox the new bad guy, the third movie brings in all new characters. Three of them. Three bad guys, none of which even existed in the first two films. There’s David Strathaim as the man giving orders from the office, Scott Glenn as his boss, and then Albert Finney as the guy running the training program for these assassins. Now I understand that there were no other characters left in the first two movies to make the new villain, but this movie should have come up with one new one and not three. One would have been much more credible, because Bourne could have spent the movie looking for clues and investigating that one. And maybe we could have gotten flashbacks of that one villain (I’m thinking Finney) working with Chris Cooper and Brian Cox. They brought back cooper even though he was dead, to do flashbacks for the second movie. Why couldn’t they do something like that again, at least by bringing Cox back in flashback form? And then Cox could have been one of the characters bridging all three movies together, appearing in all three films in some way or another.

But instead, these three new villains have no connections to cooper or cox at all, and that’s a major mistake. showing something that put cox together with them would have made the whole trilogy come full circle. but instead, after two fantastic films, this third movie wants to act like it’s starting all over. they do bring back joan allen’s character from the second movie pam landy, and I’m happy about that, but it’s not enough. especially when you’re suddenly making up three new villains and trying to pretend like they were there, behind the scenes, all along.

Okay, enough about what this movie didn’t have and have it wasn’t as good as the other two. let’s talk about what this movie does have. i like the way it continues right off the end of the second movie, starting up about two minutes after that film ended, with bourne shot and running away from the cops in moscow. and then it gets into a whole plot line about a reporter which is pretty cool. especially with bourne helping the reporter out and hiding in the corridors, taking on any cia employees who come running his way after the reporter. and i like that the reporter meets an unpleasant end, keeping things realistic again, just like the killing of that innocent character at the start of the second movie.

but then the story becomes about finding the reporter’s source, and that has less to do with bourne and more to do with a whole new made up character that will take the movie in a direction totally unrelated to everything that came before. both bourne and the cia assassins rush off to tangiers, africa, to find this source. and once there, bourne finds julia stiles. Now I love using characters over and over again from one movie to another and bringing the same actors back and all of that, but there’s got to be a reason. in the second movie, the cia sought julia stiles out because her character knew about treadstone and what bourne was hired and trained for. but in this third movie, stiles just happens to be there, as if almost by coincidence. i get that she was working for the source, a guy named daniels, but it still seems way too convenient. especially the way the movie brings her back on screen, with bourne basically rounding a corner and stiles suddenly being there. i’m glad that stiles was in this movie (she marks a character like bourne, who is in all three films), but i wish they came up with a sensible reason for her to fit in. have bourne searching for her to find answers, or have stiles looking for him. just don’t have it be a coincidence.

So now bourne is with stiles in tangiers and we get a pretty cool rooftop chase scene that end with a fist fight between bourne and an assassin. hand to hand combat. every bourne movie has about one of these scenes and it’s always bourne vs a guy who is about equally matched with him. but before this, there was a scene with an explosion and bourne on the ground and the assassin standing over him. and what did the assassin do? got on his bike and rode away. he didn’t walk over to bourne and put a bullet in him like he should of, or even stick around to see the bourne wasn’t getting up. that’s pretty ridiculous.

The end portion of the movie has bourne returning to new york. all of this has nothing to do with the reporter and the source and everything that has happened so far in the movie. instead, it’s like a separate film that is about bourne looking for answers, going back to where it all began. all of the advertisements for this movie that said things like, “Bourne is coming home,” were talking about this. jason bourne coming to new york, looking for the training facility where he became an assassin. the whole movie should have been about this. it should have been a detective story kind of mystery of bourne putting the final clues together that would lead him back to this. and the clues should have been a continuation from something that happened or was discovered in the movie that came before this.

for the find segment in new york, we get our big car chase. that’s another staple of the bourne movies (this film also had a motorcycle chase in tangiers that was pretty cool), but this time the car chase is a little different. it is more destructive than ever, with tons of smash ups and unbelievable circumstances. bourne drives a car off the roof of a building, stays in it as it crashes to the ground, and then gets out, unharmed. as if that wasn’t enough, once the real car chase through the streets happens, it is bourne’s car that is the one getting pummeled, unlike in the other two movies. the final moment of the car chase has bourne’s car get carried and dragged along a highway divider and then spin off of it, smashing wildly into the ground. it’s the kind of scene that is very similar to what killed the main assassin in the second movie. only here, of course, bourne walks away unharmed. between the assassin walking away from him after the explosion, the driving off the rooftop and walking off unharmed, and now the giant car collision that leaves him still okay, this movie really just whacks bourne around again and again without being realistic at all about the results.

Now I’m not saying i wanted to see bourne die or get seriously injured or anything, i’m just saying i don’t understand why the movie was whacking him around to begin with. it’s supposed to be the opposite. bourne is supposed to be the one kicking ass, not the other way around. this movie has quite a lot of problems. the locations are pretty cool, just like in the other films. here it’s london, madrid, tangiers, and new york. but the plot is filled with holes. bourne constantly escapes. the villains are all new to the series. and even the plot feels like two unrelated stories meshed into one so that the movie would have a longer running time. i’m glad paul greengrass made the second movie too, because otherwise i would have probably blamed him for this movie being such a mess. and it’s not exactly a bad film, it just is so much worse than the two that came before it.