The Bride of Frankenstein **1/2 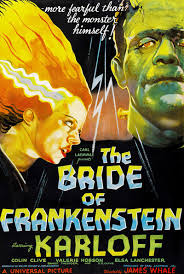 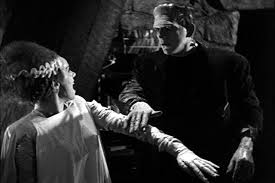 A monster movie that is only occasionally fun, as it tells the story of the return of Frankenstein and the creation of another creature.

Here’s a movie that truly got off to the perfect start and then petered out shortly afterwards. The Bride of Frankenstein opens with Mary Shelly (the author of Frankenstein,) retell info the events from her first book and then explaining to her friends that this was only half the story. Unfortunately the “second half” of the story, that follows, isn’t all that great. Two scientists bring to life another creature, to be Frankenstein’s mate, only she wants no part of him. On top of that, she doesn’t even speak. Just grumbles and other sounds. The story doesn’t go very far or find anything especially interesting to cover.

The Bride Of Frankenstein doesn’t quite work as well as it should have. It certainly gets off to a promising start, but then never finds the same level of creativity that it began with,  again. The movie opens with the author of the book, Frankenstein, talking to some friends about it. The character is Mary Shelley, the real author of the Frankenstein book. And she sits with her friends one night talking about the tremendous success that her book was met with. They talk about the things that happened in the story and we are shown little clips from the first film. It’s kind of like the way a TV show will sometimes begin with some quick images of things that happened in the previous episode. I had a feeling that this movie might do something like that. Just something to catch us up a little bit, in case the storyline was to continue from where the last movie left off. It does exactly that.

As Mary Shelly sits around talking to her friends about the story, and they compliment how brilliant her ending was, she tells them that it wasn’t the real ending. She tells them that her story goes on even further. And then she begins telling them the second part of her tale. This becomes the movie, The Bride of Frankenstein. When we join the characters in the story she is telling, they are all staring down at the fire pit that the monster Frankenstein was burned in. In this way, the movie really does begin exactly where the last film ended. I love sequels that get that right. Most of them don’t. Sometimes you have a movie like X-Men 2 that opens with the hero arriving at the place where he was heading to at the end of the last movie. But rarely do you have a sequel that opens in the exact same spot where the last movie ended. The James Bond movie, Quantum of Solace, is one of the few films since The Bride of Frankenstein that was able to figure out the appeal of opening up in this way. At the end of Casino Royale, Bond shoots a man in the leg, and then approaches him. At the beginning of the  Quantum of Solace, Bond is driving with that very guy in his trunk. That’s about as close to the opening continuation strategy of The Bride of Frankenstein as you get.

But once we join the real plot of the movie, the clever ideas and techniques come to an end. We go down inside the pit to find Frankenstein still alive and see the father of one of the monster’s victims claiming that he needs to see the monster dead for himself. This man goes down into the pit, looking for the corpse and ends up finding the monster still alive. Frankenstein kills this man and then comes back up. It must have been pretty funny to audiences back when this movie was made, when the wife of the man who went down into the pit is reaching for her husband’s hand and a hand grabs hers from down in the pit, and it turns out to be Frankenstein’s. The joke is still somewhat funny today, but I imagine when this movie came out at the time, where there were very few movies at all, audiences found that part hilarious.

We meet the scientist who created the monster, a man named Dr. Frankenstein. I never read the books, so I’m not sure how all of these names work exactly. Apparently the scientist is named Frankenstein and the creature is just called the monster. That’s how it’s referred to in the opening credits, anyway. I guess Frankenstein was the catchiest name and so it stuck, even if it wasn’t correct.

A sort of wizard or practitioner of some strange magic approaches the scientist and this man wants to work together with him to bring another creature to life. The wizard shows Dr. Frankenstein some of his previous creations, which are all just really tiny people that fit inside glass jars. This was the state that special effects were in back in those days. The best you could do was film a person and try to make him look super tiny. The wizard convinces Dr. Frankenstein that the monster that was formerly created now deserves a mate. There is talk about how the two of them will be playing god, and after that, they go to work.

Meanwhile, Frankenstein, the monster, wanders around, with no set agenda at all. He kills people who get in his way, and he eventually comes across a nice, blind elderly fellow. The man doesn’t know who Frankenstein is, because he can’t see, and so he takes the monster in. Even when people point out to this man just who he is spending his time with, the man shrugs them off. He doesn’t seem to care. This man teaches Frankenstein about friends. It’s the famous clip that is repeated in many movies of Frankenstein learning and repeating as he says, “friend…. good.”

And not long after that, we are heading off to our ending. The scientist and the wizard are ready to pull the final strings to bring their latest creation to life. It is a woman, and she is meant to be someone who will fall in love with the monster. Only she doesn’t. Instead, she wants nothing to do with him. This woman doesn’t talk at all. She is a mute who makes sounds, but says no words.

The movie ends with another explosive climax, somewhat similar to the first film in terms of its magnitude. Without giving anything away, this time Frankenstein is the cause of the destruction, and this time he actually makes some decisions. It only lasts for a moment, but it’s nice that by the end of the movie he is starting to show some signs of having a personality and feelings. I suppose spending time with that elderly man really paid off.

The movie is okay, but it doesn’t completely work because the  plot is a little too simple. Monster goes and meets a nice old man while two scientists create another monster. The monster comes and finds the scientists, they finish their creature, there’s some destruction and the movie ends. All of the moments that are actually creative and interesting happen too fast.

The movie certainly gets off to a wonderful start, with the Mary Shelley introduction, but surprisingly there’s no book ending here. The scenes of her telling the story to her friends never come back. That’s surprising considering that most older, black and white movies tend to remember to do that, from Double Indemnity to The Bad and the Beautiful. And the meat of The Bride of Frankenstein was not all that creative. The ending gets fun and lively and interesting again, but everything in between the start and end of the film was just okay. The movie lacked excitement and should have been filled with smart and fun ideas, just like the way it began.