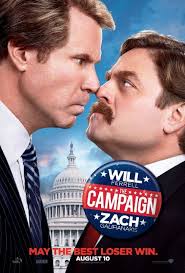 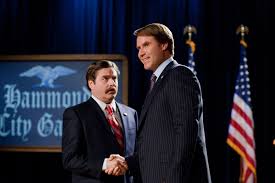 A pretty funny movie about mud slinging and vengeance between two rival candidates for office, that escalates to outrageous and over the top proportions.

The Campaign is a fun movie. Will Ferrell is basically playing his usual character, which is a man’s man who loves women and talking tough, but is also an absolute idiot. He is in no way politically correct and doesn’t seem to realize it or care. the character works for this movie, just like it did for Ferrell in Anchorman. here, he’s up against a sweet heart, innocent family man, named Marty Huggins, played by Zach Galifanaikus. we get a great mud slinging competition film, that starts out with debates and commercials and moves on to much more outrageous proportions as the film gets into it’s second half. The storyline about two evil brothers who try to pull the strings from behind the curtain, is a little cliched, but the humor is there, and most of the jokes tend to really work.

The campaign is a movie about the political scene between two congressmen running for office that pokes fun at every aspect of the race. It stars will Ferrell and Zach Galifianakus and while it might seem there isn’t all that much room for creativity with this kind of movie, it turns out to be a lot of fun. Both actors really bring there a game to the film. That’s saying a lot for Ferrell, who probably hams it up in movies more than any other actor. He’s not a bad guy, and he’s certainly made some good movies over the years (Old School, Elf, Stranger Than Fiction), but too often he relies on just being silly. In this movie, the material fits his persona perfectly.

Like the character he plays in Anchorman, will Ferrell’s character here, cam Brady, is a womanizing, stupid, man’s-man, completely not in touch with reality or with being politically correct. It’s part that he doesn’t know any better and part that he doesn’t really care. Ferrell actually plays that kind of role a lot. It’s his usual role, as he has shown in films like blades of glory and Talladega nights. Sometimes it works and sometimes it doesn’t. Here, in the campaign, he pulls it off, and that’s as much because of the ideas of the script as it is because of him.

At the start of the movie, Brady is on top of his game, being an unopposed congressman who most people in the state love. He gives speeches where he claims that every group he is talking to is the backbone of the nation. These groups include all kinds of different ethnicities and jobs, such as Mexican tilt a whirl operators (an amusement park ride.) during one speech, there’s an attractive woman in the audience wearing bright colors and jumping up and down. Brady finds a way to make time to have sex with her in a porter potty while the construction workers who use it for during their job stand outside, watching the container rocking away.

We also learn early on of a bump in the road of Brady’s popularity, which happened when he made a phone call to what he thought, was an attractive woman’s answering machine. He left a very sexual message on what turned out to be the machine of a very religious family, who had kids at the dinner table sitting around listening to the message. Brady’s campaign manager, Mitch (Jason Sudekis), tells his candidate about the numbers and how there has been a significant drop since that phone call was made. Brady’s responses are priceless. He claims that this family should not be punished because they still use answering machines and somehow got stuck in past technology and we need to help them. All this stuff that doesn’t make any sense and completely misses the issue of how what he did was wrong.

Now there are these two brothers, known as the match brothers, whom are corrupt businessmen running the political scene? They want to bring Chinese immigrant workers to America to make things at low cost in unsafe conditions. They want to bring more jobs into America, but to have those jobs filled by low paid immigrants. And these brothers want a candidate who will sign off on their ideas. They see Brady on TV, speaking some ridiculousness about that phone call he made, and the brothers (played by Dan accord and John Lithgow), decide they need to find a new candidate to back.

And so they turn to Marty Huggins (Zach Galifianakis), a gentle, innocent man who talks with a gay lisp even if he’s married with two small boys. Huggins is a likeable, friendly guy whose only downfall is that he is weak. He is basically the opposite of the cam Brady character. When we meet Huggins, he’s giving a tour of the city on a trolley and only has one person on board, a little old lady who has a crush on him and apparently rides the tour over and over again. Huggins gets a call to go meet with his father, brain Cox, and hear about the moths’ brothers’ proposal.

Brain Cox is great as Marty’s father, playing no nonsense, hard-edged guy whose son has been a disappointment every step of the way. They have some great banter where Huggins mentions something he did in the past that his father didn’t like and his father tells Huggins what he looks like. By the end of it, Huggins has agreed to run for office, mainly to try to please his dad and win the man’s approval once and for all.

And so the campaign run begins. It is filled with heated controversy between these two candidates. The first half is about the debates and the marketing. There’s one debate early on where Marty exposes the fact that cam Brady doesn’t know any religious prayers. By the end of that debate, both men are racing to kiss a baby and cam ends up accidentally punching the baby in the face. The follow up to that scene is just as funny as the scene itself. Brady refuses to take blame for the incident and instead claims the baby had an iron jaw and is unhappy that nobody is asking him how his hand is.

Then we get a fantastic marketing scene, where an advertising executive runs two commercials by Brady and Mitch, and both of them are hilarious. These are the funniest moments in the movie as the first commercial shows how Brady should be seen as a hero for having an affair with such a hot woman, and the second add claims that Marty Huggins might have connections to al quad. And the only reason for believing this is because he has a mustache. These are fantastic moments.

At about the halfway point, the movie becomes more about outrageous pranks than it does about the political scene. One man steals the others family (in a way), and the other sleeps with his opponent’s wife and then makes it into a political commercial. It’s outrageous and ridiculous, both at the same time. The movie falls into a light-hearted clichéd situation at the end where the real villains get exposed, but those moments are all about plot. This isn’t a plot driven movie. It’s a humor driven movie. The jokes are mostly throughout the middle of the film and most of them tend to work. Ferrell is right at home playing this character and galifianakus does a pretty good job with the material too. It helps to have Jay Roach (meet the parents and the Austin powers films), as the movie’s director. The movie isn’t great, because the plot ends up feeling more like black sheep, with it’s whole corruption behind the scenes agenda, than anything else. But most of the humor works and that’s enough to make it a fun film.