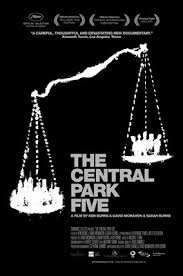 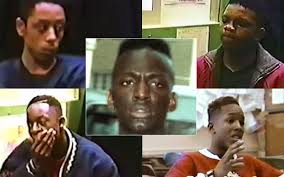 A riveting documentary about how the police coerced the testimony of five boys into a case they could use to lock the boys away for a crime they didn’t commit.

The Central Park Five is an incredibly powerful and upsetting documentary. This is both fascinating and horrifying material. It’s the story of five men who were falsely accused of attacking and raping a woman in the park, and how the media and police both crashed down on them, hard. The result was that these five men ended up being coerced into writing certain confessions, and then found themselves serving time for something that they had no part in. These men were teenagers when it all happened and they spent their next seven plus years in prison. The movie tells their story.

The movie opens with shots of Central Park at night and with the voice over of  a man who is not one of the five suspects, admitting to the crime. We don’t know, at these early moments of the film, exactly who this person is that is speaking, and we don’t know that he’s not one of the five, but his words are riveting and also terrifying as he goes into detail about what he did to the woman. This is how the movie grabs our attention.

From there we hit the news circuit, starting with a detective being interview on camera the day after the crime. He’s at the park, standing over the crime scene, narrating what the police found there and what’s being done about it. From this new story about the actual scene, we now move to overhead shots of New York City and all of it’s skyscrapers. Most of these shots wind up soaring over or close to Central Park. Interviews begin to play alongside these aerial shots, about what New York was like in the seventies and eighties. We hear all about the drugs and problems on the subway. People were doing senseless crimes and very little was being done to stop it.

Now comes more about New York and the changes it underwent. It’s important that this movie alternates between stories because that technique keeps us constantly interested. If the whole film was about one single event, this movie might have played out more like other documentaries that lose the audience’s interest, such as Man on Wire. There’s only so much you can say about one specific subject. The Central Park Five knows that and so it keeps changing things up, making it fresh. When it talks about New York this time, it talks about how the city changed. All of a sudden it started getting cleaned up, but what that really meant was that the social divide between the well-off folks and the rest of the city grew to be much larger. Crack was introduced into New York at this time and it spread like wildfire through the poorer areas. Most people found a safe path of streets to walk on between their homes and the subway, and then ignored everything else. This was 1984.

That brings us to the night in question. It was five years later, in 1989, and we begin the story with the five boys heading out for the night. Most of them didn’t know each other. They might have seen the other ones around the neighborhood, but they certainly weren’t friends. Yet somehow, they all ended up in the park together, as part of a thirty person group of boys, strolling around for the night. We here from one of these men, Raymond Santana, about how his dad sent him to the park to play basketball, thinking it would be safer there than if he had gone to the corner. It would have been great to hear from all of the guys about how they ended up there that night, and what they remembered about leaving their houses. For example, if these guys didn’t really know each other, were they each heading out for the night alone, only to meet up with the group? Were there other friends that they did know who they went walking into the park with that night? This is one area of the movie that could have been cleared up more.

At one point some of the boys in the group attacked a homeless man and started beating on him. That’s when the police showed up and everyone went running. Some of the group members were caught and thrown in the back of police cars. They were brought to the Central Park Precinct for questioning. Once there, the boys were made to sit and wait for many hours, and when they finally did get the chance to be questioned, they didn’t have much to say. It got to the point where the police realized they didn’t really have anything on these boys and were about to let them go, but then the call came in about the jogger and the message came down to keep these boys there to be questioned about this new situation.

At this point of the film, we are somewhere near the halfway point, and suddenly the movie switches gears to become completely about the investigation. Like a flash of lightning, the film now becomes incredibly exciting. The boys are questioned about the jogger, and they don’t know anything, only the police start telling them that the other boys who are there are talking and are putting them in it. That makes these boys start doing the same thing. Pretty soon everybody is making up stories about the other ones, claiming to be a witness who just didn’t participate.

This leads to the boys being videotaped. Not one of them had a lawyer present during these videotaped interviews, and all of the footage looked like the boys were just telling the story of what happened. That’s because the part that came earlier, when the police showed them pictures and told them the names of the other boys, was never put on tape. To make matters worse, the DNA tests came back and none of it matched any of the boys. The prosecution decided to take this evidence to mean that, “just because we didn’t catch all of them doesn’t mean we didn’t catch some of them.” The new theory was that there was a sixth man with these boys who they never caught, but even still, these boys definitely had a part in it. Otherwise why would they be making these statements?

All of this leads to the trial and the realization by the boys that all the prosecution has as evidence against them are the taped interviews. They are implicating themselves, or as one of the men named Korey Wise says, “They were using me against me.” It’s pretty amazing how this whole thing went down, especially without any DNA matches. But the prosecution insisted, why would these boys make these confession tapes putting themselves at the scene and describing what they saw if they were never actually there? The results are pretty crazy. Luckily this movie has somewhat of a happy ending with the final results, but of course they were convicted and sent away to prison. This movie does an amazing job of exploring the corruption in the police department that lead to making such quick arrests and prosecutions. It is an amazingly riveting and powerful film.