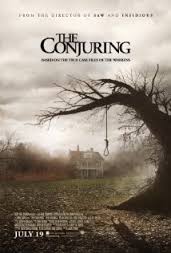 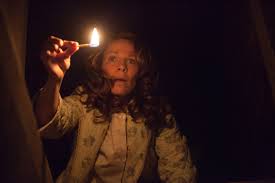 More like The Exorcist than a slasher film, this is a scary movie that relies on surprises and halcuinations more than actual death.

An interesting movie about a family that moves into a house that is possessed. The couple in the center of this are the paranormal investigators who come in to help, and they’re great.The movie starts off by following them around, and this is a lot of fun. Especially when we see the room where they keep their treasures. But when we get to the house, things become pretty routine for this type of movie and stay that way until the about the half-way point. In the end this turns into a sort of version of The Exorcist, and it’s nothing that we haven’t seen before. The movie ends up being just okay. It’s definitely entertaining, but not half as creative or scary as something like Insidious or The Shining.

The Conjuring is a horror movie about possession and exorcisms. It’s not so much about death and killing people as it is about visuals and hallucinations. This is both a good thing and a bad thing. On the positive side, it’s nice to see a horror movie that’s a little different from others. On the negative, at a certain point, we need more than just door slams and knocks on walls. The movie starts to give us a little more at about the halfway point, and it should have come a little sooner.

At the start of the film, we meet Ed and Lorraine Wwarren (Patrick Wilson and Vera Farmiga), as they investigate a possessed doll. The doll’s name is Annabelle (who has since spawned her own movie, titled Annabelle), and there are three young adults who have enlisted the help of the Warren’s. They tell the story of Annabelle and how they learned there was a ghost living in their house of a girl who had died there. The kids then decided to tell the spirit of the girl that she could inhabit the doll and continue to live there, in the doll’s body. this is a weird story, and i wish it went with more explanation. when he hears this part about the possession, ed stops and says, “wait, what?” i wish he got more of an answer to his question.

the annabelle story is just a little something to help establish these two characters. the warrens are paranormal investigators. these are the people you call in when your house is making trouble. from insidious to poltergeist, we’ve seen people like this called in again and again. only this movie is different. in this film, the paranormal investigators are the stars. we follow them from the annabelle situation into a room in the warrne’s house where ed keeps all of the dolls and items that have been possessed from previous cases he has worked. when asked if he thinks it’s a good idea to keep them all in one room, ed responds that it’s better in here then it is out there, in the world. he says it’s the same idea as getting guns off the street.

i like how the room in a sort of cabin in the woods kind of way. each item represents a different story. annabelle gets a glass case all to herself. from here we see the warrens giving lectures. they tell their stories, and when finished with the presentations, every lecture is filled with swarms of people ready to jump out of their seats with questions. these two characters, the warrens, are extremely interesting. i would have liked to spend the whole movie with them, but unfortunately, in order to be more detailed and to really show us one case, we have to move on.

that’s exactly what happens. we move on to the story of a family who is just moving into a new house in the middle of the woods. there are no neighbors around, and the land is very secluded. still the place is huge, complete with two floors and then a cellar that they didn’t even know about. the family is composed of a mother and father (lili taylor and ron livingston) along with their five daughters.

we watch the family move in and slowly things start to happen. most of them are uneventful. for example, when the father discovers the cellar and goes down there, into the dark, we expect something to happen. nothing does. the girls play a game of “hide and clap.” nothing happens. this is all setup. later on, when the mother plays the same game with one of her daughters, we get the payoff, as hands come out of a closet and clap.

the scares come slowly. in fact, in the first half of the movie, there aren’t a whole lot of them at all. this is not necessarily a bad thing. a good setup takes time. if you scare an audience too soon, you can lose them for the rest of the movie. it’s the hitchcock theory, which was then used by speilberg when he made jaws. less is more. still, it really feels like a long time that we are waiting for things to get going in this movie.

at about the halfway point or so, things start happening to the mother. thank goodness, because up until now, it’s been mostly just the kids seeing things, or sleepwalking, and none of it seems out of the ordinary. in other words, there is never a confirmation by adults that something is actually happening until the mother gets locked in the cellar and those hands appear and clap right behind her. now that’s a great moment!

Soon it is the mother who is getting possessed, and we suddenly have a version of the exorcist, only featuring a woman instead of a child. the experts are called in and they do all of their investigating. the mother has been experiencing strange bruises throughout the movie, and now we know why. it was the spirit slowly trying to get inside of her. that finally happens during a dream.

the end of the movie becomes a full on exorcism down in the cellar. it’s exciting, but not exactly the most creative. in an age where tv shows like american horror story play in our homes on a weekly basis, you have to do a little more than this to hold our attention. the shining is a perfect example of a possession movie because it gave us the psychological aspect, more than just the scares. the conjuring is okay, but it sure relies a lot on the jump scare of seeing something and then realizing that there’s nothing there. this happens way too often, and a stronger handle on the plot would have been a better use of time. this movie is directed by james waan, the same guy who made insidious. that was a far better film, because of it’s creativity and use of imagination to bring us into a new world. the conjuring is a fine movie, but it doesn’t quite measure up.