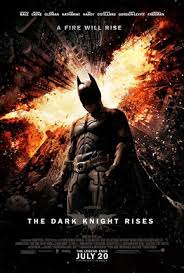 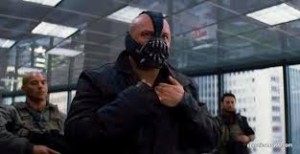 Not nearly as good as the two movies that came before it, but still a worthwhile and interesting film, just for it’s dark and ominous style alone.

The Dark Knight Rises is okay. It is well shot, and all of the action looks terrific. It also has that same outstanding music and dark, mysterious style that has characterized all three films. But there is a lot that is lacking here, for the first time in the series. Part of the problem is that the other two movies that preceded it (Batman Begins and The Dark Knight), were both fantastic. This movie isn’t. The story here just doesn’t cut it. There’s a great opening plane sequence, but after that we get a crippled bruce wayne walking around with a cane, and no explanation of why. he does pick up the bat suit again, eventually, but then it’s only a matter of time before he gets in over his head, and is back to being a criple. That’s already two major chunks of the movie with no Batman, as he is off somewhere recovering. There’s a reason for why they think they can pull that off here. Batman is not the star of the movie. Bane is. This is another problem. Villains are not supposed to be the stars. There are a ton of characters here, including Catwoman and a hot headed cop (played by Joseph Gordon Levitt). the movie is fine, but it is far from the greatness that the other Christopher Nolan Batman films were.

To expect The Dark Knight Rises to be a masterpiece is to expect too much. Christopher Nolan might be an insanely talented filmmaker who can do no wrong, but everything gets tiresome after a while. And his sequel to the first movie, featuring the amazing performance by heath ledger as The Joker, was just too great to be topped. Everything about that character was sensational. He was as funny as he was scary. In the new movie, bane just can’t compete.

He’s fine as a villain. As played by tom hardy, with a mask that never really comes off, and he is pretty menacing. But he does not have that kind of presence that the joker did, where every moment that he’s not on the screen, you are wishing that he was. Maybe that’s because we get way too much of Bane here. He’s in more scenes than Batman. The movie starts off with a fantastic opening scene that features Bane escaping from a plane while it’s in the air. The scene is similar to the joker’s opening intro scene in The Dark Knight, really showing us what this villain is capable of. But then Bane goes on to dominate the rest of the movie, while batman goes away for long periods of time.

The plot of this movie is basically about batman coming and going. And for close to half the movie, he is gone. Batman is actually taken out of the picture for two solid portions. At the start of the movie, and then again in the middle. When the film begins, Bruce Wayne is walking around like an injured old man. He needs to use a cane to walk, and keeps to himself, shut in like Howard Hughes (there are even jokes about Hughes here). It makes sense why he is keeping this low profile, after the events that ended the last movie, and how he took the blame for Harvey Dent’s death. And I like that this movie picks up as a continuation from that film, starting eight years later, but still dealing with the ramifications of what went on. What I don’t understand is the cane? Bruce Wayne becoming a shut-in I understand, but how does that lead to his physical deterioration in such a massive way? Some kind of reason or explanation would have been nice.

With Batman out of the picture, and Wayne a hobbled cripple, a new villain, catwoman (Anne Hathaway) is easily able to rob him. She is one of many reasons he decides to climb back in the saddle. It takes a while for him to decide to put the cape back on. He goes to see his old buddy luscious fox (Morgan Freeman) and fox gives him that James Bond – Q tour of all the new gadgets he’s got. After enough time has past, Wayne is up and running again, donning the outfit and showing off some of those new toys. He’s got the bat pod, with a cool new spinning tire feature, and then he also brings out a sort of bat plane, called the bat. Considering this vehicle is the big addition to the toys of the film, it’s a little strange that it’s brought out so early on in the picture. But Nolan is smart enough to only show it briefly here, and to give us more and more of it as the film goes on. By the end of the movie, we are getting a fantastic scene of the bat flying around the city, caught in a chase.

There’s a strange plot line early on involving the finances of Wayne enterprises and how catwoman has stolen Wayne’s fingerprints, sold them to a businessman, and watched as the businessman uses Wayne’s fingerprints to make it seem like Wayne made an awful transaction. This transaction is so bad, in fact, that it single-handedly bankrupts Bruce Wayne and takes him away from his own company. Luckily he has two inside players on the board, Miranda Tate (Marion Cotillard) and his old buddy Fox. And there’s a storyline about clean energy as well. It’s all a bit much.

But then there are the action scenes, and every one of them is great. The opening plane scene is amazing, but so is every scene we see Batman in after that. When we get a motorcycle chase around the city, it is nothing short of thrilling. And pretty soon Batman has found Bane’s layer and is getting his butt kicked worse than he ever has before. Now, it’s well known from the comics that bane is the villain who broke Batman’s back and sent him into hibernation. That’s really all that bane is known for. And Christopher Nolan delivers on that storyline, if not exactly, then definitely pretty close.

And now Batman is out of commission. Again. That’s twice in one movie. It’s hard to believe that this is a batman film and yet batman spends so little time on screen. There are certainly enough other characters to fill the screen time, and this movie doesn’t try to cut back on length, coming in at nearly three hours. One of the those characters is a detective named John Blake, played by Joseph Gordon Levitt. He’s young and a bit of a hot head, meaning he does what he thinks is right, no matter what his orders are. He’s basically the Harvey Dent character of this movie. And he’s given a hell of a lot of screen time here. Sometimes it’s interesting; sometimes it just feels like it’s dragging on.

Much more effective are the scenes between Bruce Wayne and Alfred. Michael Caine is an absolute masterful actor and he’s been great in every one of the batman films, but with this one he really has the chance to deliver some heavy scenes. He’s the character who puts things in perspective for Wayne more than any other. He hasn’t forgotten about Rachel’s letter, from the end of the last movie, or about how he wished Bruce would never come back to Gotham, when he left to train with Ra’s Al Ghul in the Himalayas in the first film. Alfred, more than any other, is the character who makes this movie. He’s the one who knocks every one of his scenes out of the park.

But there’s also catwoman here, played by Anne Hathaway with the right level of energy and menace. She’s the vigilante villain who goes further than Batman with crossing lines. She believes in stealing from the rich, like Robin Hood, and has no problem with killing. Hathaway looks great in the outfit, but in the scenes where she and batman are together, both wearing their costumes, it seems a little silly. One costumed hero is enough. Two just looks out of place. Still, she’s a fun character to have in the film.

Tom Hardy as the big villain is very good too. He has a strange way of talking, through his jaws like mask, where you can really hear his English accent and the in-fluctuations in his voice, and it’s pretty neat. But with everything going on, there still seems to be something missing here. Maybe it’s that for the first time in the series there is no villain who is really a monster. No villain who borders on the fantastical. In the first movie, we had scarecrow, a demon of hallucination. And then in the second film, The Joker was just a creation of pure madness and horror. Not to mention two face coming in at the end of the that film. Here, we get the mask-wearing bane, and he’s all we get from beginning to end. I realize that the reason his mask is meant to look like Jaws is so that he does come across as a monster, and maybe that’s even how we feel about it at first, but we get the hang of him pretty quickly. The action and effects in this movie are terrific, and there are some pretty intense surprises as the film goes on. But still, much of it just ends up feeling kind of hollow on the inside. Like maybe for the first time, Nolan bit off more than he could handle. Just look at how he cast half of the inception stars in this movie, from tom hardy to Marion Cotillard to Joseph Gordon Levitt. There’s a kind of combination of arrogance and laziness that seems to have come over Nolan with this film, and it’s still a good movie, but just not up to his usual standard of absolute brilliance and excellence.

Already two major chunks of the movie with no Batman, as he is off somewhere recovering. There’s a reason for why they think they can pull that off here. Batman is not the star of the movie. Bane is. This is another problem. Villains are not supposed to be the stars. There are a ton of characters here, including Catwoman and a hot headed cop (played by Joseph Gordon Levitt). The movie is fine, but it is far from the greatness that the other Christopher Nolan Batman films were.