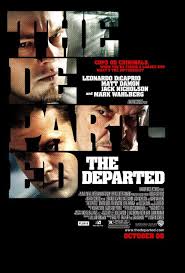 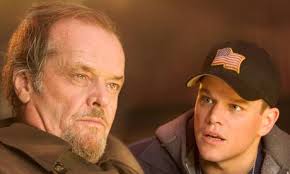 A smart and intense thriller about the inner-workings of the police department and how they use moles on the inside to take on the boston mob.

The Departed is a remake of a hong kong movie called infernal affairs, and it is a pretty perfect remake. infernal affairs was a great movie too, but The Departed takes it to a whole new level. for one thing, the cast is off the charts amazing. the two main stars are matt damon and leonardo dicaprio, two heavyweights to begin with. and then there’s jack nicholson as the head mob boss and alec baldwin running the police unit and mark wahlberg and martin sheen running the undercover unit. Mark wahlberg won a best supporting actor oscar for this movie, and that’s kind of funny because sure, he’s great, but he’s one of the weaker players in the movie. damon and dicaprio and nicholson are all on the top of their games here.

the movie is a martin scorcese film and it won him the best picture of the year and best director oscars for the year 2006. that’s also kind of funny, considering scorcese has made many better films, from goodfellas to casino to taxi driver. but this is the big one. this is the one that got the all-star cast and that came out in a time when there were only a handful of good movies. and The Departed really is the best movie of 2006.

the movie is about the boston mob and how frank costello (nicholson) has a mole in the police unit who is really working for him. that mole is colin, (matt damon), and nicholson has known and taken care of colin and his family since he was just a boy. the first ten minutes or so of the film follow colin as he rises up through the ranks and goes through all the training until he eventually lands himself on the unit that will be targeting costello.

while we see all of this storyline for colin and how he got to be where he is, we also follow the story of billy costigan, (dicaprio), who goes through the same kind of police training only to be told that he will never be a cop. he has a great i.q., but a troubled past that will never land him where he wants to be. instead, martin sheen and mark wahlberg offer him a job working for them, going undercover in costello’s organization.

the thing is, you can’t just sign up for that job. costello doesn’t just freely welcome people in. and so costigan needs to slowly work his way up the ladder, first by doing small time deals with his idiot cousin (kevin corrigan.) then costigan gets into a fight with a guy at a bar to show that he doesn’t take shit from anyone, and does it right in front of costello’s men. after that, he takes on some connected mob guys from providence, all by himself, and this gets costello’s attention. either the providence mob is going to kill costigan or frank can stand up for the boy and kill whoever the providence guys send down to do the work. i love how this movie doesn’t really show that. whatever happened with the providence guys who came down to retaliate for costigan’s actions, would have been great in any other film, but this movie already has enough going on.

i also like the different tests they give costigan to see if he’s a cop or not. this is more than just checking if he’s wearing a wire. this is bashing his hand in that has the cast to make sure there are no recording devices inside. this is sending costigan home one day with news about what costello’s crew is about to do and seeing if anyone on the police unit hears about what they told costigan. testing him. making sure he’s not a rat.

it takes a while for things to get set up and fully working and for every character to be where they need to, but Once things are in place, two things start happening. costigan starts doing jobs with costello’s gang, (such as a tunnel meeting with an asian gang), and both costigan and colin start seeing the same girl. she’s played by vera farmiga in her breakout movie role. and she handles both powerhouse actors very well. the love triangle of the movie is the thing that brings this film to a different level.

we’ve all seen mafia movies that are solely about the mob and the jobs and the way the organized crime goes down. we’ve also seen police movies about taking on the mob. and we’ve even seen movies like this that try to both at the same time. but this is one of the only movies to put a mole inside each unit (sure, we’ve seen a mole in one of the organizations before, like donnie brasco, but this movie gives us two moles.) that’s the infernal affairs storyline, and it translates really nicely to an american film.

and as if all of that wasn’t enough, there is also the romance. there’s the girl who colin starts dating and then moves in with and then gets ready to have a kid with. and we get to see them meet, and then see them out on their first date. but we also get to see her interactions with costigan, one of her patients, who she finds herself strangely attracted to. she doesn’t start messing around with him until she has transferred her to another psychiatrist, and i would have liked to see him go meet with someone else, just to drive that point home, that he is no longer seeing farmiga, but i suppose there is already so much going on in this movie as it is, that you can’t really ask for any more.

there are problems with this movie to be sure, including the way that in the second half costigan starts doing suspicious things and costello doesn’t suspect him of being the mole. first off, he’s the new guy. second, he’s the only one that’s never killed anybody. that should have been initiation. and third, when costello gives orders to stay put so he can look into their information, costigan leaves. but if you can get past these things, then there’s a hell of a lot about this movie that’s great. nicholson is the number one guy here. he’s the actor that we’re scared of. every great scorcese movie seems to have one of those, from joe pesci in goodfellas and casino to deniro in raging bull. in The Departed it is nicholson who is the violent loose cannon, and he really knocks it out of the park, by pushing the edge on the crazy button. another great thing about this movie is the music, which recycles the same songs throughout the film, and manages to make them sound like a repeating theme song or score to the movie. and then there’s the direction. the way scorcese moves his camera around and cuts scenes off quickly, keeping the audience on edge. there’s a lot to like about this movie, and it keeps you thrilled. the end is packed with surprises, even if you’ve seen infernal affairs, and that’s just one more way that scorcese delivers.