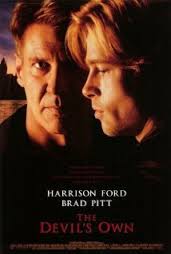 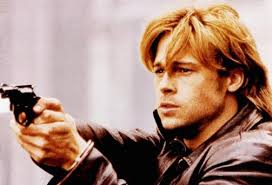 An interesting and different kind of movie involving a man with a violent and secret past who comes to stay with a family, and how the violence follows him there.

The Devil’s Own is a unique movie in that it falls somewhere between a drama and an action movie and fits into both categories equally well. The movie is about the friendship and bond between it’s two leads, Harrison Ford and brad Pitt and how they go from meeting each other to becoming close as family to learning the truth about each other and how that changes everything. It’s got a very creative story and some powerhouse performances by its two stars, but all that’s to be expected when you’re dealing with actors of this caliber.

The movie opens in Belfast, Ireland where a young Frankie McGuire is sitting around the dinner table when a man busts into the house and shoots his father dead. About twenty years later or so, Frankie (Now played by Pitt) is still in Ireland, fighting on the side of the IRA against British forces. When they come to take him and his buddies away, they put up a hell of a gunfight, shooting out of the windows of an abandoned building and firing into the streets. It’s the big opening action sequence of the movie, and it puts most of the action movies of today to shame.

Not long after that, Frankie finds himself in New York, going to stay with a man named tom (Ford) and his family. This is where the real story begins, although all of the scenes in Ireland served as a nice introduction. Tom lets Frankie stay in the basement and Frankie keeps a low profile, spending his days working on a boat that he will be using to transport weapons back to Ireland. Wealthy men are sponsoring him with ties to the IRA, such as the judge who is friends with tom and convinced tom to let Frankie stay with him.

Frankie also spends his days going to meet with treat Williams about purchasing the missiles. Williams is a corrupt businessman who operates out of an office upstairs in a bar he owns. From the early onset, things don’t seem to friendly between Frankie and Williams as they try to strong-arm each other over money. It only gets worse as complication arise.

The first half of the movie is mostly about relationships and developing bonds. It’s the drama half of the movie. Aside from that opening in Belfast, with the shootout in the street, there really isn’t much action in the first half. Instead, we watch Frankie reconnect with old friends and also meet new ones. When he first sees his longtime buddy in the street, we get a great scene of the two of them goofing around, bringing their Irish ways to New York. They throw each other into women and play soccer with a can, kicking it around on busy streets. And when Frankie needs to jump on the trunk of a car in order to get the can, he doesn’t hesitate to do it. This is not New York behavior, and that’s what is so much fun about it. Talk about a fish out of water.

There’s also a subplot in the first half of the movie involving tom and some heat he gets into with his partner. We watch them on about two or three runs and the last one turns deadly as tom is confronted with making a tough decision. It’s not a one-two-three moment either, but a situation that carries over to future scenes as tom goes to meet his wife at a diner to talk to her about it and how he’s so conflicted that he might actually quit his job. It’s the kind of subplot that we usually call a red herring in the sense that it has nothing to do with the main storyline of the film, but movies that feature red herrings are all the better because of them. They show us that there is a bigger world out there than just one simple plot line and that sometime people have to juggle more than one conflict at a time.

All of this brings us into the second half of the movie, where the truth about Frankie is revealed. It starts with a break in at tom’s house that gets both tom and Frankie fighting off the intruders. This break in scene is symbolic of the point where the movie changes over into an action film. From this point on, there will be lots more violence as covers are blown and we really dig at the heart of what’s been going on.

Tom is brought in to meet with the FBI and they tell him everything about whom the man that has been living in his house really is. Tom picks up pretty quickly that the British intelligence man who is with these FBI agents has no plans of arresting Frankie. This man was over there in the opening Belfast shootout scene and he has personally killed every other member of Frankie’s crew. If he catches Frankie, he’s going to kill him.

Tom is sympathetic to Frankie’s situation. He doesn’t support the IRA or the purchase of weapons, but he understands how Frankie never really had a choice in taking this path. It was a scene early on when tom and Frankie sat in a car together talking, that tom heard the story of how Frankie’s father was killed. And now he understands why Frankie does the things he does, and he’s not about to help somebody kill him.

The final scenes of the movie aren’t as well put together as the rest of the film, but everything can’t always be perfect. Ultimately the movie is pretty good and powerful. Harrison Ford is right at home with this role as a sort of mentor figure and brad Pitt shows some nice acting chops with the Irish accent and wild card character. The movie works because it is not all action, and really spends the time rooting its characters in a plot about relationships. By the time the action does pick up, about an hour into the movie, we care about these characters and want to see how they deal with the conflicts that lie ahead. It’s a good, interesting movie and definitely has a unique story going for it.