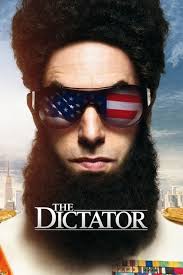 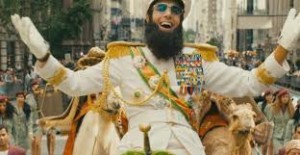 A very funny and offensive movie with a somewhat original storyline.

A pretty funny movie, this one has a similar plot to borat, about a foreigner coming to America and dealing with the cultural clashes, only here there is a decent plot as well. that storyline involves the main character, Aladeen (Sasha Baron Cohen), having to live the life of an average joe, after his royal identity has been taken from him. At the same time, Aladeen is also trying to reclaim his throne and expose the corruption that overthrough him. The storyline might not be completely original, but it works for this movie. The humor, however, is what really makes the film so entertaining. nothing is off limits here, and the movie strives on being incredibly offensive in the funniest of ways.

The Dictator is surprisingly a pretty good film. I say surprisingly because Sasha Baron Cohen has proven himself to be an untrustworthy commodity when it comes to his own feature films. As a small part of other movies, such as Sweeney Todd or les mis, he’s fine, but in his own movies his humor is a strange balance of funny, offensive, and too offensive. borat was his big success and while the film definitely had its moments, it wasn’t exactly great or super smart. Bruno was Cohen’s follow-up, and it was one of those cases where the star got too much confidence after his first film, and went a little crazy for the second. the dictator is back on the right track.

This is the movie that establishes itself as the best of Cohen’s three films. it’s still incredibly offensive, but it somehow does that in a more mainstream way. in part this is due to the stars that join Cohen in appearing in this film. there’s Anna Faris as the love interest, Ben Kingsley as the villain, and john c. reiley, turning up in a few scenes just for good measure. These stars combined with an actual story (unlike Borat, which was a sort of mocumentary complete with fake interviews), help give the movie some real credibility.

Just like borat, this is a movie about a foreigner who starts out in his homeland and then takes a journey to America, where he will spend the rest of the movie. The protagonist here is aladeen, a ruthless dictator in his homeland who rules the country by doing whatever he wants. In an early scene, for example, we see him running in a race and pulling out a gun to shoot the other competitors who are catching up to him. this guy starts laughing in the middle of his speeches when he talks about giving equal rights to all people, and doesn’t even bat an eyelash at the fact that he is being obvious about not believing his own words.

Through some news reports and quick clips of President Obama, we see that the United States has declared war on aladeen’s country, and so aladeen decides to come to America and try to clear up the disagreement. He plans to speak in front of the United Nations, and upon his arrival in New York, he rides a camel down the street and shuts it down for everyone to watch him ride by, as if it’s a parade. this is especially funny because he is so hated in the city and he is basically giving himself a parade in front of everyone.

the day before he is about to give his speech, aladeen is kidnapped by one of his security team members. the man shaves aladeen’s beard, to the point where the leader is unrecognizable. meanwhile, Aladeen’s chief advisor, tamir, (Kingsley) has jumped into action and gives power to the double, in order to make the world believe that aladeen is still doing fine and in total control. tamir now starts buttering the double up, bringing prostitutes to his room, and preparing him to be the one who will give the speech to the United Nations.

all of this is just okay. there are a few jokes here and there, like how aladeen made his name into the word for both positive and negative in his country, and this caused great confusion among people who were awaiting answers to things. a doctor, for example, gives his patient news about how he tested for H.I.V., and the patient can’t tell if that news is good or bad. but the real fun of the movie doesn’t start until aladeen goes off to live a regular guy’s life with Zoey (Faris), the girl who has taken him in.

aladeen goes to work for Zoey in her feminist flower shop and he constantly insults her and her way of life. the only reason why she doesn’t get upset is because she thinks his remarks are just silliness and joking around, never realizing that he is actually being serious with what he believes. aladeen can’t believe that this girl has hair under her arms, for example, and secretly puts shaving razors into the tip basket to try to give Zoey a hint. he smacks one customer in the head for being rude on the line and kicks a little boy into a shelf when the boy disrespects him.

the most offensive, but also one of the funniest moments has to be when he delivers a baby in the middle of the store. aladeen is so unprofessional about this that he leaves his cell phone inside of the woman and holds hands with Zoey while inside this woman as well. when he pulls out a girl, he asks for the trashcan to throw it in. aside from all this, there are plenty of other offensive jokes throughout the film. there are lots of jokes about rape, including a short story where aladeen and his former scientist recall a situation where he raped a bunch of boys and made them keep their eyes opened.

clearly this movie is not for everyone. None of Cohen’s movies are. his appeal is the way that he knows no bounds and offends at every turn. there are two storylines running simultaneously here, and at the same time as we are watching him live the down to earth life with Zoey, working in her store, we are also watching him and his former scientist work on a plan. The two of them devise a way for him to stop the double from making that speech and prove to the world that he is the real and true aladeen.

the movie might have an original plot about a leader who is thrown into a new life, but it certainly feels like we’ve seen it before, from the prince and the pauper to any one of those many movies where a figure of royalty goes to live the life of the regular person where nobody knows who he or she really is. Princess Jasmine in Aladdin is an example that comes to mind. this movie isn’t really about the story as much as it’s about the jokes. a good amount of them work, and they work because of how ridiculous and how offensive they really are. While addressing the U.N. and giving a speech, aladeen also pisses into a pitcher and then holds it up for everyone to see. The gesture itself isn’t that funny, but hearing the newscasters give the play by play of what is happening is hilarious. this is a fun movie and definitely Cohen’s best.