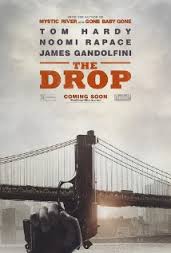 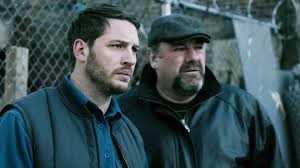 A pretty cool modern heist movie, this one is part drama, part mystery, and with it’s interesting characters, the result is a creative gem.

This is quality stuff. What we have here is a movie about a small town bar that is used by a Chesneyan mob organization as a drop off point for their money. The bar holds it on a couple of occasions overnight, and then next morning, the money is picked up. Only the bar gets robbed and that’s when the real fun begins. We start learning who characters really are and what they are all about. To make matters worse, our main character, Bob (Tom Hardy) is also dealing with a beat-up dog he takes in and the owner who did this to the dog and now wants the animal back. This owner is an underworld kind of character himself, with a reputation on the streets. The whole thing comes together nicely and James Gandolfini is terrific in a supporting role. This is a movie filled with twists and turns, and many of them come out during the course of the film, as opposed to be saved for the ending. The result is pretty cool.

The Drop is a cool movie. It’s a dark thriller that gets more clever as it goes along. That’s a way a movie should be, building in tension and suspense. This movie is pure noir, only without the cops and detectives. It is completely devoted to the underground and the people of the neighborhood who do things and either don’t want anyone to know, or the opposite, those who want the word to get out in order to build up their reputation on the streets. The central plot of the movie is about a bar that is used for a drop off point for mob money and how it gets robbed. Now that is a very basic idea, and it’s pretty impressive that this movie is able to take it and build some clever characters and story twists around it.

A lot of that has to do with the cast. Tom Hardy and James Gandolfini. Now, these guys didn’t exactly write the script, but what they do is bring a quality to their characters that you want to keep watching. And what they also do, especially in Hardy’s case, is choose their scripts wisely. If this were just a routine film, there’s no way Mr. Hardy would be in it. Just look at some of the films he’s made since breaking out with The Dark Knight Rises. There was The Warrior, Locke, and Mad Max: Fury Road. Here, in The Drop, Hardy takes a regular guy kind of character and makes him incredibly interesting.

Hardy plays a guy named Bob, who works as a bartender at the local pub. At the start of the movie, we hear his voice-over explaining what a drop bar is and how it works. It’s not that every night the same bar is used for the drops. If that were the case, it would be too easy for criminals to know which bar to rob on any given night. Instead, it’s a matter of running the bar just like usual, and then one night the mob comes to you and asks you to hold their money for the night. And you never know which night it’s going to be, but the one thing you better be sure of is that come morning-time, their money is all there, safely accounted for.

After we meet Bob, another man who works at the bar named Cousin Marv (James Gandolfini), and a bunch of locals who are drinking to their friend who died, we start to learn a little bit about these guys. Marv is the much older man who sits on the sidelines and watches Bob. He is the guy who tells Bob that he shouldn’t have bought all those locals shots, and also asks Bob to kick out a woman who comes in there drinking every day, but never pays her tab. Marv is clearly bitter about some things, and we’ll find out more about that as the film goes on.

Meanwhile, we follow Bob home for the night and watch as he comes across an injured dog. The dog has been beaten badly, and Bob rings the doorbell of the woman whose house the dog is in front of. This is Nadia (Naomi Rapace) and she is rightfully suspicious of this strange man ringing her bell. She makes him show her I.D. and even takes a photo of his license and texts it to friends in case anything happens to her, before letting Bob in her house. He and Nadia now begin to take care of the dog.

This is all setup and introduction material. The real storyline gets started when the bar is robbed. To make matters worse, when Bob returns home, he is confronted by the man who’s dog he has. Bob isn’t exactly happy with this man for beating the dog, and he refuses to give the man his pet back. This man is Eric Deeds, and he does not seem like he’s going away anytime soon. In fact, he shows up at the bar a few days later, and Cousin Marv tells Bob that this is the guy who claims he killed that man that all of the friends were drinking too earlier on. Deeds wants ten thousand dollars from Bob in order to keep the dog.

Meanwhile, the bar also gets a visit from the Chesneyans, the mob guys who had their money stolen that night of the robbery. These guys are pretty upset, and they have no respect for Marv. Apparently Marv used to own the bar and had to sell it to them when money got tight. We follow Marv away from the bar and into a car with the man who robbed the place. Turns out Marv is in on it. Now, this is the kind of twist that most movies would save for the end of the film, and here we are learning it right smack in the middle. That’s because this movie has plenty of other twists saved up for its second half, and by revealing this now, it helps build the tension and excitement. It’s like when we learned who the real villain was in L.A. Confidential, during the Rollo Tomasse midnight home visit scene where Kevin Spacey stopped by someone’s house in the middle of the night. Great mystery movies have the luxury of doing that and not having to save everything for the very end of the film.

Back at the bar, the next morning, the boys receive a package with an arm in it. This is the arm of one of the men who robbed them. The two robbers are brothers, and Marv wants the one who is still alive to come back on Superbowl Sunday and rob them again. When he refuses, things don’t go so well for him. Meanwhile, there is a detective working the robbery case, who Bob gave some information to. He told the detective about the robber’s broken wrist watch, and since then, has taken a lot of heat for giving that information up. You don’t talk to the police in this town, and Bob should have known that. Both Marv and the Chesneyans aren’t happy with him for speaking. And the arm that arrived at the bar is the very one that had that broken watch on it.

There’s a cool moment where the detective is in a car reading a file on Eric Deeds and learns something that makes his eyes light up in surprise, only we don’t find out what it is. Not yet. The movie is saving that. There is a secret of sorts that is revealed about Deeds and his relationship with Nadia, and then we get to the big night. The Superbowl Robbery. This is where the real twists come out. It’s a great scene that really holds nothing back, and yet at the same time, it doesn’t go overboard. This doesn’t become a massive action scene with all different parties in the same place, like, say, the end of Enemy of the State or True Romance (both by the same director, by the way.) Instead, it is about the quiet mysteries and how the guys who keep their mouths shut and don’t talk about what they’ve done are the real ones to fear.

The Drop is a hell of a movie. It’s a film noir that takes place in a very small landscape. This isn’t a film about a bunch of detectives, but instead about a bar and the couple of people who frequent it. It’s a movie about the town and how the whole business operates, including the under the table parts. The characters are rich and so is their backstory including lots of twists from their pasts. This is James Gandolfini’s last role before he passed away and he is fantastic here. So is Hardy. The movie definitely has smart writing and the actors are of such high caliber that they propel what would have already been a good movie into being a great one. This film really captures the tone and environment it was going for, and has a terrific storyline with reveals that all take place at exactly the right time. The result is a very cool picture.