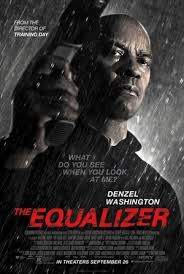 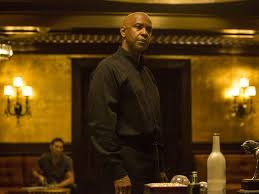 We’ve seen this movie again and again, but if done right, like it is here, this kind of thing is always fun.

It’s the same movie we’ve seen before, be it Taken or John Wick, to name two recent examples. And yet, this movie is still a lot of fun and even finds some ways to feel a little fresh. That’s pretty hard to do considering how often movies in this revenge-filled genre are turned out. Denzel Washington is a pro at these kinds of movies and he handles the material nicely. It helps that he’s working with the same director who helped him win an Oscar for Training Day. Here, Washington is playing the good guy vigilante and he finds some very exciting ways to overpower his attackers. The movie takes a little too long to get going, with a lenghty beginning that is devoid of action, but once the attacks start coming, they don’t stop, and this becomes a very enjoyable film.

The Equalizer is a movie that looks just like about a thousand other movies that we’ve seen before. It’s always one man against an evil organization, and it’s pretty much always about revenge. Ever since Charles Bronson took to the genre with the Death Wish movies, this kind of thing has been kicking around. Even Denzel Washington has tried his hand at it before with Man on Fire, where he was after the organization that kidnapped a little girl. When done right, we get Taken or John Wick. When done wrong, we get Man on Fire or A Man Apart (Vin Diesel) or Taken 2. Luckily the Equalizer is one of the movies that does it right.

Now, it’s not nearly as good as Taken or John Wick, but that’s because those two movies were rare exceptions that found ways to be creative. All three of these movies have spawned sequels. There is a John Wick 2 and an Equalizer 2, both in the works right now. And Taken, of course, spawned a trilogy, although I’m not sure why they would have followed Taken 2 with a third movie, considering how bad the second one was. (Luckily the third is actually somewhat decent.)

The Equalizer doesn’t get nearly as creative as something like John Wick (that movie featured a sort of subplot about a hotel for assassins), but it does have some fun with the genre. The one thing this movie adds to the mix is that it’s hero, Robert McCall, is an empolyee at a home goods store, much like The Home Depot. Just like John Wick, Taken, or any of those other films, McCall used to be an assassin. He has long since retired. In this movie, he used to work for the C.I.A. And of course, something will get him to break a promise he made, to never go back, and will get him to do exactly that.

The movie takes a little bit longer than it should have to get going. We see McCall in his daily life, but then we continue to watch him and his routines, again and again. It’s more than just watching him at work, or watching him interact with the other employees there, who wonder what he did in a past life. We actually see this guy hanging out a diner three times. Each time he is reading a book and discussing it with Teri (Chlor Moretz) a call girl who uses the diner as her base while waiting to get a call for a job.

There’s only so many times you can hear the two of these characters talk about The Old Man and The Sea. As if that wasn’t tiring enough, we also see McCall helping to train an overweight employee at the store, who is looking to become a security guard. In order to do so, the man needs to get in shape and to pass a test. So McCall is working with him. It would have been nice to find out why this man sought out McCall. We know what McCall did in his former life, but does this other guy? If not, then what makes him think this older man who works at the store is the guy to help him?

Despite the movie taking what feels like about thirty minutes, before the first action scene, once it gets going it doesn’t stop. That means once we get our first action scene, they just keep on continuing. Credit that to director Antoine Fuqua who knows that a good movie is only as strong as its villain. Between Taken, John Wick, and this film, The Equalizer is the weakest of the three (partially because those other films are so great), but it is also the movie that features the best villain of the bunch. The bad guy is Russian man named Teddy, and once he is introduced, he never goes away.

Fuqua is a master of the villain, having directed the movie that won Denzel his Best Actor Accademy Award, with Training Day. In that movie, the villain was the main character. Denzel was on top of his game with that film in a way he has never been before. It’s no coincidence that in this other prominent Fuqua movie (other than Training Day, he hasn’t had a whole lot of success), the villain is also incredibly strong. There’s no question Fuqua is a good, smart filmmaker, and his big problem is that he doesn’t always pick the best material (Tears of the Sun, King Arthur.)

All of the action and trouble gets started when the Russian prostitution ring that Teri works for decides to beat her up one night. There’s one guy in particular who does it, but he’s always surrounded by a bunch of coworkers and bodyguards. I like that in the first scene where he meets McCall, he thinks that McCall is a client and gives him a card. This is going against the grain of the usual cliche, where he would know something wasn’t right about this guy and say something to him like, “what are you looking at?”

When Teri winds up in intensive care at a hospital, McCall decides to pay a visit to those Russian mobsters who put her there. That’s when the fun begins. There’s a great action scene in the upstairs office of these guys where McCall takes out a whole bunch of them. That’s what brings in the big boss, Teddy, to start investigating and finding his man. It doesn’t take him very long to figure out it’s McCall, and the rest of the movie is these guys going after him.

McCall is very much like another version of Liam Neeson in the Taken films, using his skills and setting things up around his apartment, so that he can spy on these guys. There are tons of great action scenes here and Fuqua really gets to show off some skill with the directing. Of course the movie has to have that inevitable scene where McCall doesn’t just go after the bad guys, but also goes after their money. In John Wick, Keanu Reeves torched the money. In this movie, McCall brings in the cops. Another cliche here is that McCall has to have a friend who appears in one or two scenes in the middle of the movie, and is his advisor. And that friend must be played by a known actor. In Man on Fire, it was Christopher Walken. In John Wick, it was Willem Dafoe. Here, it is Bill Pullman and his wife Melissa Leo. Despite these tropes of the genre that appear in every film, the movie still finds its own edge. The lenghty climactic sequence really elevates the film to a new level with McCall finding all kinds of clever ways to take out the garbage. Just like the other movies in this genre, The Equalizer feels like a B movie done well. Considering that all these films (the good ones) keep getting sequels, maybe they’re not such B movies after all.