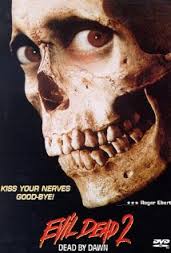 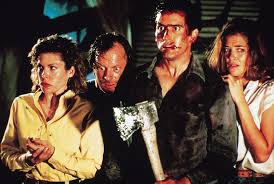 Evil Dead 2 is the eighties version of the cabin in the woods. It’s what that movie would have been without all of the elaborate creativity. Basically, it’s got the same kind of humor. Campy with a capital C. over the top. How else to explain a movie where a guy does battle with his own hand, even after the hand has been cut off?

The movie also has a sort of everyday guy turned knight, fighting to save the world from evil spirits story going for it. And none of it gets a huge explanation or anything. We are just meant to take it as is. There’s this book of the dead, and if certain words get uttered, than the book gets reopened and spirits come to life. The plot is about as simple as that.

So our hero, ash (Bruce Campbell), and his fiancé, Linda, go to a cabin one night to spend a weekend getaway in seclusion. The owners of the cabin are away and they are pretty much breaking and entering, living wild. They stumble upon a recording made by an archaeologist who found the book. Once they play the recording, the man’s voice utters the demonic words, and just like that a spirit has come awake.

We see the spirits only from the point of view of the spirit, which is a very smart and cost effective touch by director Sam Raimi. He’s the guy that went on to make movies like darkman and a simple plan and the gift before finally being thrown the keys to the kingdom when Sony gave him the director’s chair on all three Tobey Maguire Spider Man movies. Raimi is a master of horror, having produced the grudge and then making drag me to hell as well. But the Evil Dead trilogy will always be his masterpiece, and The Evil Dead II is by far the best of all three films.

That’s because it seamlessly blends horror with humor. That’s what cabin in the woods does too, which is why the two movies share the same tone (as well as a premise about characters going out to a secluded cabin in the woods.) but The Evil Dead II, unlike the other films in it’s trilogy, gets everything right. It gets the storyline and scares exactly where it wants them, telling us only what we really need to know. And then it gets the jokes in there whenever it can.

One of my favorite comedic moments in the movie is when the spirit, (which again is just a moving camera, where we never see the camera, just the spirit’s point of view), chases ash around the cabin. And both he and the spirit go crashing through every door in sight. When the spirit moves, it’s got a strange mechanical-like moaning sound, and that always tips us off that we’re watching the spirit in case we didn’t know already. But in this one moment, where the spirit chases ash around, every time one of them even touches a door, it goes cracking and splintering into about a thousand pieces. The way they just land right through one door after another, without putting in every effort at all, is absolutely hilarious.

Ash’s fiancé, Linda, gets overtaken by the spirit pretty early on, and becomes a sort of zombie. Ash then does battle with her using a shovel to take her apart. But this is still only the start of the film. Other guests are on their way to the cabin to join up with Ash. There are two couples coming. The first is the could who’s family owns the cabin. The old man on the tape was the father of the girl who is coming along with her boyfriend. And then there are the redneck hicks who take them along. These two are a couple of class acts, willing to do anything for a little money, no matter how stupid.

Once the four of them meet ash in the cabin, all hell officially breaks loose. A zombie wife who has been buried in the basement is woken up and a fight to the death ensues. But despite the threats, the scares, and the blood, this movie never forsakes humor. It constantly gives us scenes like the one where everything in the room becomes alive and starts laughing at ash. Scenes that are a little scary, but very ridiculous and funny at the same time. The lamps, the tables, the mirrors, everything comes to life and starts laughing an evil laugh. And ash starts laughing right along with them.

This movie also employs clamation, which was the seventies and eighties version of what would later become stop motion animation. Whenever there are headless bodies walking around, dancing, or attacking, you can bet its clamation. It looks silly and fake, but in a good way. It makes you laugh. How ridiculous to have a headless body dancing around. How ridiculous to have a grown man terrorized by a moving hand that has a life of it’s own.

Evil Dead II works because it is fun. The hero mumbles one liners that are so corny and tough sounding, about half of them were used in the duke nuke video games, and the other half inspired that character. “Groovy.” ash not only chops off his own possessed hand, but he then attaches a chainsaw in place of it. If this isn’t the inspiration for the Chinese movies where a chick goes around with a machine gun for an arm, then I don’t know what is (not to mention the Robert Rodriguez Grind House entry planet terror, where Rose McGowan sported a machine gun for a leg.) Evil Dead II is the inspiration for a whole lot of movies and ideas that came after it. Any movie about a cabin in the woods and the forces that come out and attack it should really be traced to hear. More so than night of the living dead. Because unlike that movie which was about the zombies, this movie is about the cabin. It’s a very witty film, with more laughs than horror, and it absolutely delivers. This movie isn’t trying to be the smartest thing out there. It’s not trying to be amazingly clever and twisty. It’s just trying to be a lot of fun. And it certainly is.