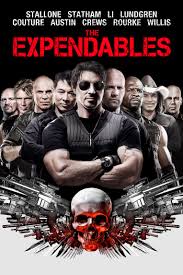 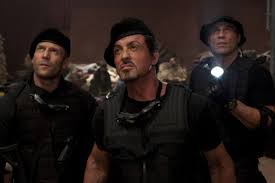 A fun, simple, b action movie that accomplishes exactly what it sets out to and nothing more and nothing less.

The Expendables is a decent action movie. It might have a clichéd and routine plot that is kind of forgettable in the end, but the action is still top rate, and that’s really what the movie was hoping for. As far as storyline goes, there are reasons why every movie was made, and too often it has nothing to do with the plot. This is such a case. There’s a story behind how this movie came to be, and it might shed some light on why the plot of the film was never a top priority. The story behind the story all starts with Quentin Tarantino, a man who had nothing to do with this finalized film. For a few years before casting his movie, Inglorious Basterds, Quentin Tarantino publicly pondered what his movie was going to be about. At first all we knew was the title. It was rumored that the movie would be about the Vega brothers, John Travolta’s character Vincent Vega from Pulp Fiction, and Michael Madsen’s character, Vic Vega, from Reservoir Dogs. But then Tarantino let a little bit of information fly. He let the world know that his movie would be a men on a mission film. Something like The Dirty Dozen. And he talked about wanting to get all the eighties action icons as his stars. Stallone, Schwarteznegger, and Willis.

Well, at a certain point Tarantino must have realized that either he wasn’t going to get those guys, (Schwartznegger was still the governor of California), or having those guys in his movie didn’t really fit what he wanted to do with the film. I mean, if you look at Inglorious Basterds, there’s no way you can see those guys in the roles. I’m sure the script got changed massively since the idea of having those actors involved in it, but even still. And that’s when Stallone heard about Tarantino’s rumblings and liked the idea of being in a movie alongside his icon buddies. And when the Tarantino version didn’t get made, he said, “Well, it’s still a great idea. So if he’s not going to do it, then I’ll just make it myself.” And that’s exactly what he did.

Stallone wasn’t able to get Bruce Willis and Schwartznegger for anything but cameos, but they still both appeared in the film, and the concept was still the same. What Stallone did get is a bunch of other guys, all action movie stars of some sort or another. Jason Statham is there playing the number two, (this guy makes some of the best B action movies around.) Jet Li is on hand too. Statham and Li are friends from having made two movies together, War and the One, neither of which is very good.

Dolph Lundren is there. That’s pretty cool, considering he and Stallone were enemies in Rocky IV, but this guy’s career has been practically non-existent ever since (he did team with Jean Claude Van Damme in Universal Soldier, though). Speaking of Universal Soldier, in one of the Universal Soldier sequels, also with Van Damme, the wrestler Goldberg was the bad guy. Now he’s in this Expendables movie. So are Randy Couture and Terry Crews, two guys who i think are ultimate fighting champions or wrestlers or athletes. either way, they’re not actors. oh, and eric roberts is in there too. not really the stellar cast one would hope for, but some decent b movie action stars.

all of this might lead one to see why the storyline to the movie probably wasn’t that great. stallone himself hasn’t been watchable in years. the last thing i enjoyed him in was cop land, back in 1997. there, he played a kind-hearted, slow-witted police sheriff. and he was perfect for the role. you believed it because of the sadness on his face and the deep, slow way that he talks. he should be taking more roles like that. more brain damaged kind of things. they say when you play a mentally challenged person, you win an oscar (they say that in tropic thunder). stallone should try. the academy would love to have a name actor from the past up there for consideration. they did it just a few years ago by nominating mickey rourke for the wrestler.

but here, in the expendables, stallone is playing barney, the leader of the pack and supposedly the smartest among them. that isn’t really believable at all. but i guess this movie wasn’t meant to be believable. it was meant to be a campy, over the top, eighties action movie. and in most respects that’s exactly what it is. it’s a movie where the dialogue consists of the guys cracking lame jokes about their weapons and then laughing at each other.

the movie starts with a big mission where the guys get into a shootout with some terrorists in a single big room. it’s meant to show how they kid around with each other, even while in the middle of a shootout, and also just how good they all are at doing this, despite their ages. there’s a funny moment where stratham’s character, christmas, has his phone go off, and tell the boys he’s getting a text, but that’s about it. mainly, what we get out of this opening scene, is cool action. there are guns and technology put to use here that make everything we see look pretty cool.

one of the guys on the team double crosses them, and now he’s off the team for the rest of the movie. do you think he’ll join up with the bad guys? this opening action scene is okay. stallone pulls out a gun and pops a number of shots off like he’s clint eastwood in the man with no name movies. but then it’s onto the dialogue scenes and that’s where the movie gets ridiculously boring.

bruce willis gives barney a mission and he takes it to his boys. then the boys head out to take care of it. the mission involves a drug lord and the men who work for him and a general and the general’s daughter. she’s supposed to be the innocent character of the movie and is torn between her evil father and helping out barney and his men. none of this is very interesting. whatever plot there is to this movie is pretty simple and really just filler to get us from one action scene to another.

But the action really is great. there’s a cool plane shooting scene, for example, where christmas pops up on the nose of the plane with a machine gun and fires down at everyone, and then a whole bunch of other fighting and bloody gun battle scenes. there’s also some fantastic scenery here, all shot beautifully. between that and the action, the look of the movie is pretty great. if only the plot was something new. the storyline here is just meant to strings us along. we get a side plot involving christmas and the girl he likes and the guy she’s seeing who beats her up. but the main storyline here is between barney and this general’s army, and in the second half of the film, he takes his team out to destroy whatever the general’s men are up to. the movie isn’t great, because it’s story is so weak, but the action is certainly top notch, and that’s really why anyone goes to see a movie like this.