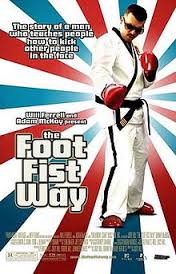 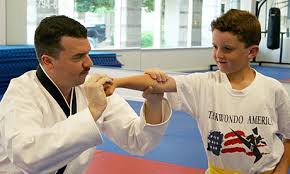 A movie with good intentions that just misses it’s tone and beats and ends up being more of an unsuccessful drama than the comedy it was going for.

The Foot Fist Way is a movie with a clever basic premise, that still doesn’t quite work. The jokes aren’t very funny and yet they keep trying to be, banging you over the head with the same lousy ideas. That being said, since this movie, actor Danny McBride has found his rhythm and mastered how to make this kind of character work. Which is why the foot fists way should really be viewed as a warm up film. His turns in movies like Pineapple express and your highness, as well as his starring role in the TV show eastbound and down, should be the movies that really represent him.

The movie might have a very similar character to east bound’s Kenny powers, but for some reason in the foot fist way, the jokes fall flat. There are many theories to why that is and it’s a very interesting question, considering in all of those later successful examples he is basically playing the same character.

One theory is that the foot fist way just takes everything too far. It is a violent movie, and the extreme violence is meant to be funny, but at a certain point it really is not. For example, there’s an early scene where a man is sparring against an elderly woman. Simmons talks the scene up by announcing to the man exactly what the woman is about to do to him and how the man should worry and all that. He sets it up perfectly, and you just know that the man is going to kick the woman’s ass and that Simmons is going to look like a fool. But when it comes time for that ass kicking, there is more of a focus on the physical violence than on Simmons’ reaction. The man puts some hard hits into the woman and she can’t even get up. That’s not really funny. It would have been much funnier if the man threw her into a bunch of stuff, broke a lot of shelves and tables and glass and things, and then at the end, Simmons tried to make an excuse for why the man was able to do that, not caring about the woman at all.

Another theory behind why this movie doesn’t work is that it has no heart. There is no likable romantic angle here or worthwhile friendship or anything. Basically everything that eastbound and down has that this movie is clearly missing. Simmons does have a co-teacher friend, played by the movie’s director, Jodi hill, but the character is as lifeless as a zombie. And the relationship between Simmons and his wife is a total bust throughout the movie, with her constantly cheating on him. So it’s almost that there is just nothing good happening here? No success at all. Just a bunch of failure. For a black comedy that might work, but this movie is no black comedy.

A third theory is that there are no funny or likable side characters. Danny McBride is a fun actor and he knows how to make this sort of role work, but he does need a little help. In this movie he is not given any. There are a couple of students who he spends more time with than others, but McBride mostly just says the wrong things and you feel bad for these kids more than you like spending time with them. Then there’s his lifeless co-teacher. And then there’s his nemesis, chuck the truck (played by Ben best), who is more scumbag and asshole then nice and enjoyable to be around. So McBride is left to do it all on his own and he can’t. He at the very least needs someone to bounce things off of who will help him work out his own material. Here, he is given nothing.

The plot of the movie isn’t all that great either. Simmons is a karate teacher who considers himself a sort of celebrity. Apparently he won a few trophies once and has since let it get to his head. He bullies people around and takes what he wants without ever thinking about what he’s doing. He’s not very nice to most people and very often he’s way off in the way he approaches things. That sounds like it could be funny, but in this movie more often than not, it isn’t.

He has the cheating wife who he separates with, and then a new female student who joins up with the dojo, but that’s about it for the first half of the film. It seems like it’s mostly an introduction to his life and style. A very long introduction. Then, at about the halfway point he takes his co teacher and two favorite students on a field trip to meet chuck the truck.

Now the plot finally starts coming together into something worth watching. Simmons convinces chuck to come make an appearance at his dojo’s testing demonstration, which is a big event for them that are held in a gymnasium. Chuck comes and stays with Simmons and sleeps with Simmons’ wife. And so chuck and Simmons become enemies and fight it out. All of this is more dramatic then funny.

The movie does end with the testing as the climactic big event, which is one of the first things this movie gets right. But even that isn’t handled the right way with a fight between Simmons and chuck the truck. There should have been a part 2 here to their earlier fight, but instead they just break a bunch of bricks and there’s really no clear winner.

The funniest stuff in this movie is Simmons’ pursuit of a romance with the female customer he recruits early on. Simmons is way off base with this girl and she has no interest in him at all. That is essentially the idea of eastbound and down and it works well there because it is really used. Here, that plot line is only put to use in two or three scenes. Considering it’s the funniest stuff in the movie, that’s a major problem. The foot fist way is a bit of a mess. Its intentions are good, but it never finds the right tone to make its jokes work.