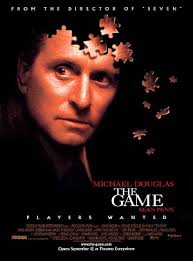 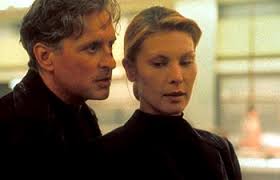 A very cool and twisty thriller, that is dark, clever, and full of suspense.

This is a clever psychological mystery filled with all kinds of puzzling scenarios. None of it is overly complex or anything, and it never comes close to something like inception, but instead this movie exists in a very practical reality where a company can pull the strings to make crazy circumstances fall upon a person. The characters here a pretty straight forward, but it’s the plot that gets really creative. It’s almost like an experiment of how much can they come up with to fill this elaborate conspiracy. And poor, unassuming Nicholas Van Orton (Michael Douglas) is at the center of it all, thrown into a set of events where nothing is, as it seems. This is definitely the kind of movie Hitchcock would have made today, and David Fincher’s style goes perfectly with the environment of the film.

The Game is a movie of master craftsmanship by director David Fincher. This is a guy who built his career on strange movies that existed outside of the box, and yet were filled with enough style to catch the mainstream’s eye. Nothing was so weird as to be more of a cult favorite than a fan favorite, but many of his movies found their footing somewhere in between. Take seven, for example. This was Fincher’s breakout movie, (he had done music videos and also made Alien 3 before it.) Seven is certainly a cult favorite, but like The Big Lebowski it has gone mainstream and is the kind of movie that everyone has either seen or knows of, almost as recognizable a serial killer movie as the silence of the lambs.

Fincher broke into the a list of directors category with the social network, but he was making terrific films like zodiac long before that. In fact, the game is still what many consider one of his three best films. These were the three films that made Fincher and announced his presence to the world. In order, they were seven, the game, and fight club. Of the three of them, only the game never caught on to the public as a movie to be remembered, treasured, and put in the time capsule, the same way those others did. Maybe that’s because it is more of a puzzle, like the movie cube, than it is a specific genre film, like those other two were. Both seven and fight club were about crime. One was through the eyes of the detectives, the other through the eyes of the criminals. The game was not even in the same genre, and it certainly wasn’t as graphic. It’s more like the kind of movie Hitchcock would make, all illusion and tension and uneasiness due to uncertainty.

The movie is about a man who finds himself being targeted by all sorts of conspiracies and mysteries. The man is Nicholas Van Orton, played by Michael Douglas. This is a guy who has all the wealth in the world and is not surprised or entertained by anything. He takes business meetings over the phone from his luxurious office desk with a personal shower right behind it. We see flashbacks to how Nicholas always grew up with wealth and how money couldn’t buy happiness for his father, who ended up killing himself, jumping from the roof of their mansion one afternoon.

It is Nicholas’ birthday and he takes lunch with his brother, Conrad (Sean Penn), who has had his share of drug problems and been in and out of rehab. Conrad is the black sheep of the family, and when he sits down at the table with Nicholas, he tells his brother of an unusual birthday present he got for Nicholas. It’s a company called CRS, and all Conrad will tell Nicholas about it is that “they make your life fun.” When Nicholas goes to the company and meets with the executive there, (James Rebhorn), he doesn’t get much more in the ways of answers. “We provide whatever’s lacking,” Rebhorn tells him.

Nicholas goes on his way, and gets a call telling him that the company rejected his application. But then he drives home one night to find a life size clown doll lying facedown on the pavement outside of his house (in the same manner which is dead father was found after jumping off the roof.) Nicholas brings the clown inside; only to have a hell of a scare when his TV starts talking to him and it turns out there is a camera inside his house controlling the entire thing. This is one of the coolest scenes of the movie.

The next day, Nicholas goes to dinner and has the waitress spill wine all over his suit. He gets a check on the table that says, “don’t let her leave,” and when he goes chasing after her, the game begins. This waitress is Christine (Deborah Kara Unger), and Nicholas chases her into the street where a homeless man collapses in front of them. They get an ambulance to come to the scene and they both end up getting thrown in the back of it with the patient.

Things start getting really bizarre when the hospital garage they are in suddenly shuts down, all the lights go out, and everyone runs away. The two of them head to an elevator, which is the only light in the garage, and have to climb through the ceiling of it into a building that is CRS headquarters. When an alarm goes off, they are suddenly running around, being chased after by security, climbing fire escapes in alleys above Chinese restaurants. This is certainly not the usual day for millionaire Nicholas Van Orton.

After he and Christine part ways following the end of their evening of adventure, a number of other strange circumstances fall upon Nicholas. He is followed by a private detective, sent to a hotel room filled with Polaroid photos that seem to be incriminating, especially when next to a mirror filled with lines of cocaine. Nicholas gets into a cab and the driver slams on the gas, jumps from the car, and sends the cab into the river, with Nicholas in the back seat. He gets the cops involved and they go to the floor with him that CRS was on, only there is nothing there anymore. It’s as if we were in Hitchcock’s North By Northwest, with carry grant taking the police to the mansion where he was held captive the night before, and seeing how nothing is how he remembered it. Everything has changed and he’s the one who looks crazy.

Like any good mystery, the stakes get raised at the storyline continues to unfold. Nicholas takes matters into his own hands, first locating Christine and snooping around her apartment, and then trying to find the guy who signed him up (the James Rebhorn character.) The second half of the movie is all about Nicholas trying to control the circumstances and become the hero. Maybe that’s what CRS was all about. Getting him to be the star of his own movie, kind of like total recall. Whatever it is, it worked, but not without a few conspiracy theories along the way, including the idea that the company is out to steal all of Nicholas’ money and clean out his accounts.

There is a lot to like about this movie. The atmosphere that David Fincher has created is superb, from the yellowish hazy colors of his palette, to the eerie, spine-tingly, haunting piano music. This is absolutely Fincher at his best, not relying on gimmicks, but instead, playing master artist. Both Sean Penn and Michael Douglas fit into their roles perfectly and show real vulnerability here. And the story is full of incredible twists and moments of realization. I love the scenes with Deborah Kara Unger, both the one in her San Francisco apartment and then the one in the cabin. She is a wonderful femme fatale and the movie really works on all kinds of levels.