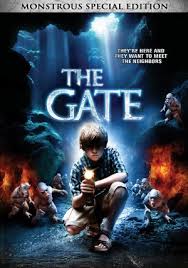 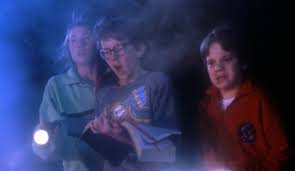 An okay eighties horror movie about kids who discover a hole in their backyard with demons coming out of it.

The Gate is the kind of cheesy, silly horror movie that could only have been made in the eighties. It’s the kind of film that maybe they might try to remake today, just like they did with the movie fright night (originally an eighties horror flick that got remade recently as a Colin Farrell, CGI movie), but it would be all computer effects and the supernatural ideas would be given more of an explanation. Everything today has to feel like it could possibly happen, or like at least they are justifying how it could possibly happen in the real world.

But back in the eighties, there was so much imagination going on and such a drive for fun that the realism of everything didn’t matter. And yes, there were plenty of campy, corny, and cheesy movies that came out of that. But most of them still hold up today as funny, if nothing else. From the lost boys to the monster squad to the evil dead, these movies were made for fun and they still come off that way.

The gate is one of these movies. It’s not one of the better examples; because its premise really is paper-thin and it’s characters are very one-dimensional. But it still knows how to have fun and how to not over-do the explanations for everything. The story is very simple. There’s a storm one night and it knocks over the tree in a boy’s backyard. That boy is glen, (Stephen Dorf when he was a kid), and he soon finds that there’s a giant hole where the tree once was.

Glen tries to cover the hole up by filling it in with dirt. Only the next day, the hole has reappeared and is just as deep as it was the day before. Strange stuff starts to happen, such as glen’s dog dying, and that’s when glen’s best friend, Terrence, gets the idea that this hole might actually lead to a spirit world underground.

Terry is the kind of nerd who studies this sort of thing. It’s always the friend who is the expert and brings the crazy ideas to the attention of our hero. And the hero, of course, always thinks the friend is crazy at first, until he is proven wrong. This was exactly what happened in fright night, with Chris Mintz Plaze playing the friend in the remake. Oh, and the friend is always one of the first to go, and be turned into one of these creatures of the night.

In the gate, strange little creatures start to pop out of the hole and come to the house. These guys are about the size of large rats and look like demons. They mostly hang around the hole, but every so often they come near the house and our heroes have to kick them out. There’s also a bug zapper that keeps going off and flashing in strange ways.

All of this doesn’t add up to much. That’s because the scares aren’t really well thought out moments. In one scene, for example, the parents appear at the front door, but of course it’s not really them. It’s just an illusion or a demon version and as soon as glen approaches them, the dad tries to take a bite out of his son. We’ve seen this sort of thing before. In fact, we can call it from the moment it starts happening. When the parents show up at the door, covered in smoke and mist, we know it’s not really them.

I do like the way the plot has the parents go off for a weekend somewhere and have the older sister stay around to watch her brother, glen. the sister invites her two friends over and glen invites terry. And it’s just constant sleepovers at the house, night after night. The two friends of the sister who stay over invite some boys to join them, and you would think having all of these dumb teenagers in the house might lead to more victims. It certainly should have. Even just having one of the teenagers open a closet or bathroom door and a skeleton falls out and attacks him, or something, would have been sufficient. But this movie has the boys come over just to be turned down and sent away. What a wasted opportunity.

And Terry, of course, gets turned. That is such a cliché that it’s practically a staple of the genre. In this movie he falls down the hole that supposedly is the gate. This would be our chance to see what exactly this hole is a gate to and why the movie has this title. Only all we really see is the inside of the hole. It kind of looks like a rocky cave. And that’s it. Brining us this close to seeing what this hell world might look like, and then not actually seeing anything at all, is another huge wasted opportunity.

The Gate works only on the simplest levels. It’s not a very smart movie and not one of the better eighties teenage horror films. But it’s still okay. The plot moves forward at a decent pace and keeps us interested. And the creature work, fake as it is, still comes off as kind of cool. I’m not sure which I prefer, this kind of acclamation sort of work or the CGI effects of today. Both look so incredibly fake. Definitely real makeup and costumes are preferable to either one of them, but this movie doesn’t employ that technique. It’s an okay film, that is definitely kind of dumb, but still ends up with some light hearted, campy horror fun.