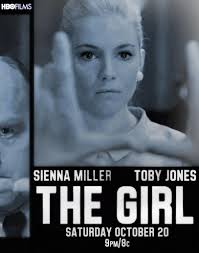 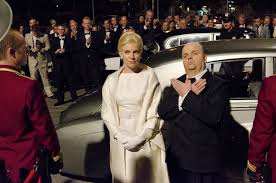 A somewhat interestingbut also often disturbing look at alfred hitchcock’s relationship with actress tippi hedron, and the inappropriate things that went on.

The Girl is a very strange movie. It’s a movie that takes the genius filmmaker, Alfred Hitchcock and looks at him not so much as a master director, but as a real person. And a very disturbed, perverted, and depressed person at that. There’s another movie out now, in theaters, called Hitchcock, which stars Anthony Hopkins and looks to be a very different kind of film. That movie is most likely about this man’s skill as a director. This one is about the man and his personal life.

I had reservations about seeing this movie for two reasons. The first is that actor Tobey Jones really doesn’t look much like Alfred Hitchcock here. He does what he can, and so do the makeup people, but in the end there is only so much you can transform a person’s face. Of course, with the trailers for the Hopkins movie out right now, everyone can see what a better job the makeup people did in that movie, making Anthony Hopkins really resemble the fellow. That movie probably had a much bigger budget, as it is a theatrical release whereas The Girl is an HBO movie. Still, Tobey Jones gets the voice down just right, and so one is actually able to get past the appearance problems easier than expected.

The other reason why I wasn’t sure I wanted to see this movie is because I knew what it was going to be about. I knew that this film was about the poisonous relationship between Hitchcock and one of his many female leading ladies, tippi hedron. I knew that the movie was going to show Hitchcock in a negative light and make him seem like a terrible person. And sure enough, it did. I didn’t know if I wanted to see that. After all, I love the movies he has made and think he really is a true genius. In a way learning how terrible someone is, who you think is great, is like learning that your idol is really a nobody. But still, I was intrigued, and so I did watch the movie.

I’m glad I did. This was certainly an interesting film. The movie picks up after Hitchcock made psycho in 1960 (the making of psycho is the subject of the Hopkins movie), as hitch is trying to figure out what his next project should be. How do you follow up such a masterpiece as Psycho that captured the attention of the movie going public and spread through word of mouth as one of the most popular and talked about movies of all time? Hitch has an idea. His idea is to make a movie where the attacker is not a human, but an army of birds.

Having already made Vertigo, north by northwest, rear window, and now Psycho, perhaps hitch is done with the evils of man. Or at least he’s ready to take a break from it. And so he goes about casting The Birds, looking for a young and attractive blonde woman to play the naive schoolteacher who comes to a new town and ends up starting this whole mess. The birds attack because she’s there, in the town, and they want her out. Something like that.

It’s been years since I’ve seen the birds, but what I like about this movie is that it tells us enough about the story of that film so that we get the basic idea of what it’s all about. I really like when Tippi Hedron (played nicely by Sienna Miller), argues for her character and refuses to accept that her character would go up into an attack by herself. Hitchcock tells her that the character is giving her to the birds. She is sacrificing herself because she knows that she is the one who caused all of this.

What Tippi doesn’t realize is that in many ways this action is what Hitchcock is hoping that she does with him. He wants her to give herself to him. Even if she doesn’t find him attractive or want to be with him, he feels that she owes him, the same way that the character owes The Birds for coming into their town. Tippi has come into Hitchcock’s movie and into his world and he can’t stop thinking about her.

I love all the visits to the set of the movie The Birds. We get an insiders look about what went down during the production, including the famous phone booth scene where, apparently, Tippi didn’t know that the glass was going to break. In fact, according to this movie, it wasn’t really supposed to and was just an accident. Of course the whole thing happened right after Tippi rejected Hitch for the first time, and so it seemed more than a little like Hitch had rigged the thing on purpose and was getting his revenge on her.

Similarly, the attack scene of the birds and the way we watch how it was filmed, is an absolute horror show. Tippi is subjected to real birds that claw at her and tare away at her face in a tight, stuffy room, and she is made to struggle with them again and again. Hitch keeps giving her more takes and she agrees to keep going. It’s kind of a game of calling the other one’s bluff. Tippi refuses to give up and feels that she will keep going until he says to stop, even if that means that she gets destroyed in the process. Anything to expose this man for the monster that he really is.

Only it doesn’t quite work, and for some reasons tippi agrees to make another movie with the guy. That second movie is marnie, and I suppose the reasons for it are that she is under contract and can’t get out of it if she ever wants to work in the industry again. This movie really delves into dark places and makes Hitchcock look like a terribly depressed individual. He has some drunken scenes where he rants about how terrible his life is because of his hideous looks and how much he wishes he could trade places with someone younger and more handsome. This is a fascinating film. It never makes you feel good or clean, and in many ways is not an enjoyable experience, but it is still very interesting the whole way through.