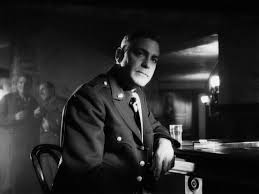 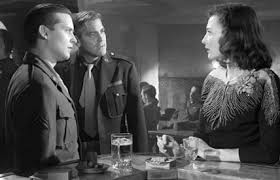 Stylistically cool, but an overly complicated plot marks this attempt at combining casablanca with film noir and a splash of psycho.

The Good German is a strange movie. it is meant to be an experiment, which is clear just from the use of black and white alone. but this movie tries for something more than the usual current day movie filmed in black and white, like woody allen’s celebrity. The Good German actually wants to act as if it is a movie from the forties. it’s got the over the top, high-note music, the swiping from side to side editing moves that take us from one screen to the next, and some exterior shots that look like old, grainy footage from the age of silent films.

all of this is certainly a stylistic accomplishment at the very least. steven soderbergh, the director, is more experimental than anything else. just look at his movies full frontal, (which is like a mocumentary on the hollywood studio system), or bubble, (which is an indie crime thriller that goes right into a small town and the way one new face can upset everything.) soderbergh has made a name for himself by being different, with movies like these and traffic. and clooney is also a guy who is always searching for something new. just look at the second movie he directed and also starred in, good night and good luck. another black and white, experimental film, where the use of black and white is meant to make us feel like we are right there, in that time period with the characters. it is also noteworthy that clooney has worked with the coen brothers three times now, a directing team that, like soderbergh, is all about trying out new genres and experimenting. the coen’s have a black and white film, (the man who wasn’t there), clooney has a black and white film that he directed, and now soderbergh has his black and white film, The Good German. clearly in this circle of filmmakers, going black and white to capture an artistic feel is the way to go.

but style will only get you so far, and after that it really comes down to the plot. in The Good German, the plot has a lot to say, but no clear way of presenting it. i’ve found that this is often the case with soderbergh’s films. more often than not, they are overly complicated when they don’t really need to be. the oceans movies often felt like there were tons of inside jokes that only the actors were in on. and don’t even ask me what was going on in the clooney astronaught soderbergh directed movie, solaris.

but one can’t forget that this director is also the guy who made out of sight, one of the greatest movies of the past twenty years. that movie, too, was overly complex, jumping back and forth through time, but it was still a lot of fun. sadly, the same can’t be said of The Good German. the movie opens with clooney’s character, jake, being driven around by a young hot shot driver, tully (tobey mcguire). jake has just arrived in berlin as world war 2 is coming to an end. the germans have already surrendered and the japanese are on the verge of doing the same.

Tully has a girl, who happens to be a prostitute, and he plans to get her out of berlin. in order to do that he needs to get her papers and papers are not so easy to come by. all of this is in the same vein as the plot points of casablanca. so is the fact that the girl, Lena, (played by cate blanchet), is an old flame of jake’s. she is such an old flame, in fact, that she’s the reason he’s come back to berlin. she is all he’s thought about since leaving, and all he’s talked about to everyone he’s come across while back in the states.

The plot moves rather slowly for a good portion of the first half. that’s because it’s just taking it’s time setting up the characters and waiting for clooney and blanchet to reconnect. only when they finally do, it’s really not such a big deal. she brushes him off, and basically ignores him, because she’s got a new life now and other things on her plate.

tully ends up dead, and that’s the psycho element right there. up until now he has really been the main character. we’ve followed him into scenes with lena and into private meetings with military officials. we’ve watched him smuggle things and attempt to make deals with dangerous people. and when he washes up on the riverbanks with a bullet in him, it’s a move that shocks the audience. not quite as much as it did in psycho when marion crane ended up dead halfway into the movie. that was such a unique move because she was really the only main character in the movie. we didn’t know who we were going to spend the rest of the film following. here, in The Good German, it seems obvious that we will now start following the clooney character, jake, and that’s exactly what happens.

the movie now becomes a bit of a mystery with jake trying to put the pieces together to figure out who killed tully and why. the problem is there are lots of people who might have killed him, based on the deals he was involved in, and the reasons why don’t seem to matter. maybe they didn’t want to pay him for work he did, for example. still, jake gets his friend and investigating officer, lelan orser, to look into it. the russians are trying to cover it up and nobody seems to care. jake has other ideas.

as the movie goes on, we learn that lena has a secret and that this secret has actually defined the person she has become. her whole life revolves around it, and so does the second half of the movie. but it’s not really such a big deal. and now jake takes over for what tully was trying to do for her, which is to get her out of berlin. the movie is so obvious in it’s attempts to copy casablanca that it even ends with an airport runway scene, with the two romantic leads dressed in hats and trench coats, as they stand with each other in the rain. it’s a little too much of a copy.

the movie does have a somewhat interesting plot, and should be applauded for its creativity in going to such great pains to capture the look and feel of a movie from the forties. but the plot is way too complex and the pacing is certainly too slow. it’s not that the movie feels boring at any time, it’s just that the plot is so confusing and has so many strands that it’s hard for us to keep focussed on what’s important. it’s a movie that puts style above substance and that’s a grave mistake. the plot is always the absolute most important thing about the movie. if the plot is weak then the movie is weak. in The Good German, it’s not that the plot is weak, but just that it isn’t told clearly at all. that becomes a major problem. it’s just an okay movie. nice to look at, but easy to get lost or just stop caring about the storyline.