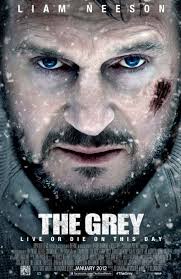 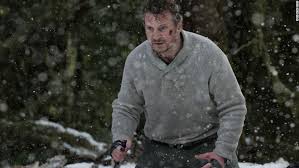 It’s cliffhanger meets alive, with a bunch of wolves as the enemy.

This is one intense movie! It’s gritty real-deal stuff, shot with hand held cameras to feel all the more authentic. And nearly everything about the movie works. This is a survivalist story about a group of men who have been in a plane crash trying to make it through blizzards and vast emptiness. The thing that makes the movie so great, however, is that they aren’t just trying to survive the weather and the terrain. these men are trying to survive a pack of angry and ferocious wolves whose den they have wandered into. We get loads of fantastic scenes here. the movie doesn’t really get started until the plane crash, and might feel a little slow at first, but once that plane hits the ground, the movie is off and running, without ever looking back.

The Grey is a Joe Carnahan movie, and it’s probably the director’s best movie yet. This is a guy who loves making hardcore action-packed guy movies. He broke out with the corrupt cop movie Narc, which was a dark and gritty take on the classic Japanese film, Rashomon. That movie definitely showed off Carnahan’s skill at storytelling, and unfortunately he had a few missteps afterward. Between smoking aces and the team, things were looking ugly for this guy for a while, but with the grey, he is back in top form. This is absolutely Carnahan’s best movie yet.

For one thing, unlike his last two films, with the grey, there is no comedy. There isn’t even any attempt at comedy. If he had gone more serious in his last two films, he would have gotten completely different results. The Grey is a scary picture. It’s a movie about survival. The characters are all rugged dudes who work on an oilrig out in Alaska. Now they are taking a flight back to some of the warmer states, when the plane gets into a horrific crash.

There are a group of survivors, about seven or so, and they are led by Liam Neeson’s character, Ottaway. Neeson is perfect for playing the lead here. It was rumored that Bradley cooper might have been given the role, and that would have been a terrible mistake. Cooper is of course friends with director Carnahan, from making The A Team, (as is Neeson), but he is way too young to be playing an experienced hunter and expert wolf-killer. Neeson, on the other hand, is perfect of the part. As an actor, he is all about playing the experienced action hero these days. In the last four years, he has become a very different actor then he used to be. Taken is the movie that rejuvenated his career, and the single film that transformed this older Englishman into an action star. After that, he did a similar kind of thing in unknown. And now with the grey, he is three for three. All good movies, all action.

The movie has Ottaway lead the other survivors, mainly because he is the one with experience killing wolves. His job on the oilrig was to hunt the wolves and keep them away from the workers. As the men setup camp on the very first night and build a fire, they hear the wolves howling all around them. This is pretty intense stuff. The only time we’ve really heard anything like this before is in werewolf movies, and there it is usually just one wolf howling away. Here, not only is it a bunch of wolves, but it is also more realistic, and all the more scary because of it. When we see all those wolf eyes light up in the distance, during one spectacular moment, it is scary as hell.

We don’t really learn a whole bunch about the different men in the group, during the movie, and that’s a shame. I was partially expecting flashbacks to what their lives were like before, or something like that, but no such luck. Nothing of any real value, other than a quick snapshot here and there, anyway. And maybe we’re better off without them, because leaving this cold atmosphere and going off into warmer weather for different scenes would kind of take us out of the experience. Still, I would have liked to somehow learn more about these guys. Other than the one guy who has a daughter (Dermot Mulroney), the rest of them are like ghosts.

Instead of learning about the characters, the movie is busy getting the boys from one place to the next. Ottaway has the idea that if they can make it into the woods they will be okay. They can all see the trees up ahead of them in the distance, and the hope is that they can get there during the day and be safe for the night when the wolves come out. Of course, the wolves don’t exactly play by those rules, and they attack during the day just the same as they would at night.

We see a bunch of wolf attacks, and every one of them is pretty scary. They come from behind or from the sides when they are least expected and they are absolutely ferocious. There’s one scene where the guys are all running through the snow and the fog and the wolves come from behind and start picking off the last guy in the group.

At another point, the men do kill one of the wolves and they roast the head and body around a fire, trying to send a message to the other wolves. That’s what one of the men, Diaz (Frank Grillo) is hoping, anyway. He’s the character who starts out a jerk at the beginning of the movie, but then learns to go with the flow and not cause ripples in the water as the movie goes on. He’s the one who is attacked by the wolves, but survives, and has a sort of awakening as a result.

The cool thing about this movie is that, just like Cliffhanger, characters die in all kinds of ways. In that film, Stallone and his crew were up against a bunch of killers and thieves, but they did not all die at the hands of those guys. There were plenty of mountainside accidents and things like that. Here, in the grey, we get the same kind of thing. These guys aren’t just trying to survive the wolves. They are trying to survive the weather and the terrain as well.

I’m glad that the movie never turned to the character having to eat each other for survival, or anything like that, the way alive did. Instead, it is more of an action movie than a realistic “what would you do,” film. The only problem is there aren’t enough scenes of the men kicking the wolves’ butts. I would have liked to see a lot more of that. Considering that we’re rooting for the men the whole time, the audience would have loved to see more wolves getting killed. The men should have found a way to set up traps somewhere, even if they were just simple nets that would spring up or holes in the ground. Still, if that were to happen, the movie might run the risk of being campy. This way, it isn’t happy at all, but it certainly is dark and realistic.