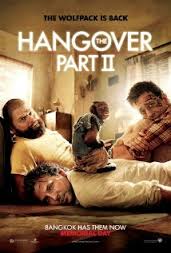 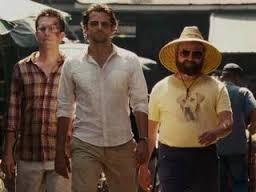 Very similar to the first movie, which is not really a bad thing at all, this movie has fun finding ideas for how to repeat the same scenes in different ways.

The Hangover 2 was enjoyable. It wasn’t nearly as funny as the first film, but how could it be? We already know the characters and what they are capable of, and we’ve already experienced the same plot before. There are new jokes of course, but still, the first movie was completely fresh and unexpected. And with the second one, we can really just hope to see more of the same. That’s exactly what we get.

The plot is extremely similar. One of them is getting married. This time it’s Stew (Ed Helms). He’s marrying a girl from Thailand and the wedding is taking place over there. So the boys go out there and have a night out celebrating, drinking beers by a campfire and toasting to each other and their “wolf pack.” then they wake up in a seedy motel room in Bangkok.

When they wake up, Alan’s head is shaved, Stew has a giant tattoo on his face, and there’s a cut finger on the floor. The combination of stew’s face tattoo and the cut finger are meant to double what happened last movie with stew’s tooth being missing. this time he again wakes up with something major done to his head, that he did to himself, but then there’s also the mystery of the finger and whose it is, and what happened to it’s owner.

as the guys wander around bangkok, they find more clues and run into more similar circumstances. when they try to pick up teddy (the brother of stu’s new wife) at the police station, the police turn over an old man. it’s another case of mistaken identity, just like the “black doug,” mike epps in the first movie. and again, the guys are forced to take this character with them.

a tattoo artist serves the role of the doctor in the first movie. by that i mean he speaks english, is able to explain to the guys what they were like last night, when none of them can remember anything, and is working on a patient / customer while the guys go and talk to him. he points them in the direction of a monastery that the old man belongs to.

when they go to the monastery, they are beaten with sticks by a monk for talking. this scene of all three of them getting beat up is just like the police station scene in the first movie, only without rob riggle, it’s not nearly as funny. but in this pattern, the movie finds ways to repeat all of the same jokes. they find a monkey in their room which takes the place of both a baby and the tiger in the first movie. and instead of making the baby jerk off, alan (zach galifanakus) makes the money nibble of a bottle that looks like a penis.

the jokes continue to be similar, all the way to the end, including how they figure out what really happened through a moment of realization. but that’s not necessarily a bad thing. critics are panning this movie left and right because of how similar it is to the first film, but better to be more along the same lines then to be totally different, and not really feel like a sequel at all. and that happens sometimes too. when it does, we always say, they had it so perfect in the first one, all they had to do was keep it going in the same way. well, here that’s exactly what they did.

while the movie does have a ton of similarities to the first movie, it also has it’s own things going for it. the first portion of the film, before they get to thailand, is a lot of fun. the boys beat around the bush with the idea of inviting alan. and then they all go over to his house together to invite him. and at the rehearsal dinner, the girl’s father makes a hilarious toast comparing stu to rice pudding.

the journey that the boys take to put the pieces together after they wake up the next morning might bring them to a number of similar circumstances, but there are also plenty of new ones too. there are car chases with gun wielding motorcyclists, and rooftop gangster meetings complete with helicopters and double crosses. there’s a lot of fun to be had in this movie, and i applaud it for not veering too far away from it’s successful formula. if it’s not broke, don’t try to fix it. director todd phillips knows funny, and he is able to use the same formula as the first hangover and still pull off a somewhat funny and entertaining picture. the movie is definitely best in it’s first half, before the storyline starts getting too close to the first film, though.