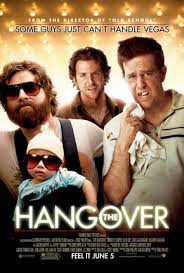 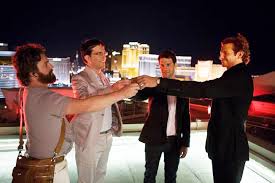 A fantastic bachelor party / vacation movie, not only for it’s comedy, but also for it’s piece-it-together mystery plot line.

The Hangover is a modern masterpiece. It’s one of the great comedies of our time, right alongside Superbad. These movies are unafraid to do or say anything as long as it’s funny. And unlike Superbad, which is really just a buddy-high school movie, the hangover is a completely fresh concept. It’s a mystery involving three characters searching for their missing friend and trying to piece together the events of the night before.

The movie opens up out in the Nevada desert, where our characters next to a car, all beaten up. One of these guys, Phil (Bradley Cooper in the movie that made him a star), makes a phonecall to the fiance of the missing friend. he let’s her know what’s been going on out there, only in the vaguest terms, but the conversation ends with her saying, “we’re getting married in five hours,” and him replying, “yeah, that’s not gonna happen.” the line is so perfectly timed and delivered and then cut away from, allowing us to have the chance to think about it, that it really kicks the movie off in the right direction.

we go back about two days earlier, as the groom, doug is trying on tuxedos with his fiance’s brother, alan (zach galafinakas in the role that also made him a star.) alan is a strange guy with his fat gut and thick beard. their’s a tailor trying to fit him for a suit and alan shouts out, “watch it, pervert.” that’s a perfect introduction to who this guy is. there’s plenty more where that came from.

we move from these two guys over to phil, a teacher, collecting money from his students and then throwing it in an envelope marked “vegas.” and then the three guys drive over to pick up stu, or “dr. faggot,” as they shout out. stu has a girlfriend who is an absolute bitch, and somehow they find a way to play this for laughs in the way stu cowers to her over and over again. they talk about strip clubs and how once he didn’t call her for a few hours, and it’s a funny scene, even if it does make us cringe a little.

and then the boys are off, and the party really begins. we hang out in the car with them as they drive on the highway, screaming out the window and drinking beer in the back seat. alan has a bunch of funny lines, such as when he talks about dustin hoffman in rain man, and we start to enjoy spending time with these guys almost instantly. the movie takes nothing for granted, and shows us all the little details, including the guys filling up at a gas station, or going into the rest stop and having a funny, graphic conversation right in front of the clerk.

when they get to vegas, they check into a villa at caesar’s palace, go up to the roof for shots, and the rest is history. the next thing we know, they’re all passed out on the floor of the villa and it’s the next morning. there’s a chair with smoke coming out of it, a duck walking around, and a bath tub filled with bubbles and a doll. once the boys start waking up, they find plenty of other strange things as well. there’s a tiger in the bathroom, a baby in the closet, and stu the dentist is missing a tooth. what the hell happened last night? that question and finding the answer to it becomes the mission of the movie. that and finding their buddy doug.

the guys sit by the pool and start talking about ideas, and soon they’re off to the hospital, tracing down phil’s wristband that tells them he was admitted last night. the hospital leads them to a wedding chapel and from there, over to a stripper’s apartment. but this isn’t all just one clue after the next. there’s plenty of fun along the way, such as when the valet guy throws them the keys to a police car, and they take full advantage. they go along with him calling them officers, hop in the car, and use the sirens to drive on the sidewalk. they even use the microphone to make comments about attractive women they drive by. “Ma’m in the leopard dress, you have an amazing rack!”

as the mytery continues to build, these guys have a run in with the police and a couple of confrontations with some gangsters, led by ken jeung. but this isn’t an action movie in any way, and whenever there is anything that even resembles action, it really just amounts to our boys getting beat up. they get crowbarred, pulled out of cars, and tasered by a bunch of school kids and the police. and by the end of it all, they are hardly any closer to recovering their friend, doug.

the movie takes the time out to hang with mike tyson and a tiger and to have our character sit around listening to stu make up a song while they wait for the tiger to pass out. alan also sings a song that he made up at another point in the movie. and all of these songs are pretty funny. watching the boys piece together the craziness of last night is even more fun than it would have been to watch them out the night before. that’s because with every new thing that they learn they got into, their reactions are priceless. from stu getting married to stealing a cop car to kidnapping a tiger, the gags just keep on coming.

the hangover is a fantastic comedy, but it’s also a great mystery. it’s got side plots (needing to make money at a casino, fast), and mcguffins (black doug). it’s got enemies on both sides of the law, but not the kind of complicated intertangled plot that we tend to get in a tony scott film. instead, each character they come across represents his own short story. the movie was directed by todd phillips who is a master of comedy. not everything he’s made has been great (school for scoundrels), but he’s got quite a lot of funny movies under his belt. from road trip to old school to starsky and hutch, he has always been the go to director for frat pack movies (vince vaughn, ben stiller, luke and owen wilson, will ferrell, ect). here, with the hangover, phillips proves just how talented he really is. this movie had a no name cast when it came out, and now the actors have all become giant movie stars. that’s because it’s an amazing movie. even if you don’t like the comedy, the plot is richer than that of most straight movies. this movie really does have a lot going for it, and every bit of it, including the soundtrack, is a lot of fun.