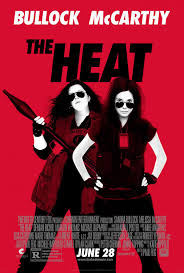 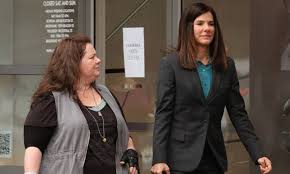 A very funny movie that gives us a somewhat routine and generic plot, but is so filled with laughter that we don’t really care.

This movie is extremely funny, in a horrible bosses-repeat viewing to catch all the little things, kind of way. Every bit of that is due to Melissa Mccarthy owning her role as Mullins, a loose-cannon police detective. Aside from her, there’s not a lot going on here, and the amazing thing is, it doesn’t really matter. We could care less about the actual case and the bad guy she and Sandra Bullock are trying to catch. The only thing that matters here is how go for broke Mccarthy is, and the relationship between her character and bullock’s. the two of them have some very good chemistry, and that’s really all that this movie needs to become a very good time.

The Heat is a pretty funny movie. It might follow a standard buddy cop formula, where one cop is crazy and the other one is down to earth, but this movie takes the Judd Apatow approach to the genre. This is to lethal weapon what Superbad was to American pie. That means there are tons of curses and sexual jokes and pretty much nothing is off limits. Thank goodness for that, because Melissa McCarthy needs that kind of freedom to really shine. Just look at how she couldn’t save the movie identify thief without being given the opportunity to cut loose and let it all go.

The Heat is about an expert DEA agent, Sarah Ashburn (Sandra Bullock), who is a pro at her job. This woman is completely by the book, does everything perfect, and yet can’t get the promotion she’s after. Part of the reason for that is because others on her team don’t like working with her. Sarah is just too good. We get a couple of scenes in the beginning of her going in, banging down the doors of some bad guys, getting past all of their little tricks, and finding their drugs. Sarah narrates to her coworkers exactly what they are missing, and we can see how she might be a hard person to work with, making everybody else around her look pretty bad.

That brings us to the nutcase part of the team. It’s Shannon Mullins played by the very funny Melissa McCarthy. This actress has really risen in popularity over the past few years, with her breakout role in Bridesmaids, back in 2011 propelling her to instant stardom. Since then, she has only had one starring role, in identify thief, yet seems to be popping up in cameos everywhere, from The Hangover Part III to this is forty. Mccarthy is always fun, even when the movie isn’t. That was the case with identify thief. Luckily this movie is a hell of a lot better than that one.

every buddy cop movie needs one of the two cops to be crazy and the other one to be straight edge and down to earth. eddie murphy played the crazy one in forty eight hours and mel gibson played him in the lethal weapon films. here, it’s mccarthy playing this character, mullins. now this could have easily felt like just another rehashing of the same character that we’ve seen before, only in the hands of mccarthy it is something new. she and bullock really let you know that these are two women playing the cops, having all sorts of conversations that would never appear in a male buddy cop movie. just watch mccarthy rank on bullock’s outfits again and again, whether it’s out at a club or at home, making fun of her pajamas. there are jokes about year books, strange women and cats, and even female body partys. you don’t get these in a male buddy cop movie. at least not the same way.

mccarthy plays mullins as the lunatic cop hell-bent on getting her criminals at any cost. in her opening scene, she busts a guy who is trying to pick up a prostitute and ends up climbing through his window to pull him out of the car. then she goes after another criminal, this one a young black kid, and finds herself throwing a watermellon at him to knock him to the ground.

Mccarthy is great because she is not only a very funny actress when it comes to dialogue, but she’s also incredibly physical. in this movie, for example, we don’t just get one scene of mullins climbing or pulling someone through a car window, but two. in another scene that comes early in the film, mullins is forced to fit her car into a very tight parking spot where she can’t even open the door afterwards. so instead, she climbs out of her car window, in through the window of the car next to her, and then out the door of that car. there’s nobody else working today who looks like mccarthy (her body type) and is doing the things that she is.

it seems like she’s getting herself known as the female chris fahrley, a comedic actor who uses her body in all kinds of abusive ways. that might seem like she’s just doing the same thing again and again, and maybe it’s true. but so what? many male actors get typecast into doing the same kinds of roles and basically playing the same type of character in every film. sometimes this works, like it does for seth rogen, but more often the magic wears off, as it did for adam sandler, jim carrey, and now even vince vaughn. only time will tell how it goes for melissa mccarthy, but teaming up with director paul feig for two of her first three starring movies (bridesmaids and the heat,) was definitely a smart move.

the plot of the heat of course has these two characters joining forces together to bring down a drug kingpin. there really isn’t anything fresh in the storyline, although at times the movie does try. when it brings in mullins’ family, for example, it approaches something different. there are great characters here, including two girlfriends of some of her brothers who are very funny together. and bill burr is also great playing one of the brothers. but there aren’t enough scenes with the family and a few too many of them spent with the criminals, pursuing a very familiar-feeling case.

Sandra bullock really doesn’t do a whole lot in this movie. i never thought she was the greatest actress to begin with, and so i suppose this role fits her just fine, taking a back seat to mccarthy the whole way, but it’s hard to believe this is an oscar winner. bullock really just plays it straight and simple here and lets mccarthy have all the fun. and the story has no problem making room for plenty of pointless scenes like a dance number the two of them do at a bar.

the heat did very well at the box office, and already has a sequel on the way. that’s a pretty great thing. this movie has the audacity to go for an r rating and not shy away from scenes that have the potential to be funny if they just push the edge a little. the film is by the same director of bridesmaids, and while it isn’t nearly on the same level, i applaud it for going the same hardcore language r route that mccarthy’s breakthrough movie went. a few more sexual jokes in here would have pushed this movie even further, but it’s still very good.