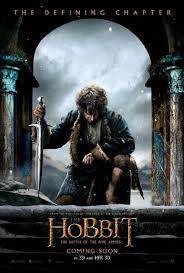 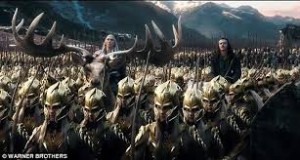 By far the weakest of the six Peter Jackson-Middle Earth films, this one feels stretched out more than the others and the battles are just okay.

This is the movie that doesn’t work. Out of six films made by Peter Jackson, in this Middle Earth universe, five of them were pretty good. And yet, at last, he ended the run with this film, which was pretty lousy. When he should have been saving up connections to the Lord of the Rings films, (during the run of these three movie,s )and a really cool battle for the finale, Jackson instead proved to have nothing saved at all. The beginning and ending of this film were fine, but most of the movie is played out in the middle, and that was where it all fell apart. The movie starts out with the death of Smaug, the dragon from the last movie, and it ends with some fine one-on-one fights. But other than these few moments, the film is pretty awful. The supposed battle that the title refers to barely exists at all, and there are many dull or lazy moments given to us instead.

the hobbit: the battle of the five armies is undoubtedly the worst of all six middle earth films. it’s the movie that didn’t need to be made. that’s a real shame, because this was actually the movie i was looking forward to the most. there are many reasons why i bought into the hype and allowed myself to be blinded from the obvious truth. that truth is that this single book, the hobbit, didn’t need to be made into three movies. now i liked the first two hobbit films quite a bit, but this third movie really didn’t have much of anything to add to the others at all.

the hype that i believed was that this movie would be huge and action-packed. the title change is what made me think that. originally the film was called there and back again (the title of the book bilbo writes), and when it changed to the battle of the five armies, suddenly it took on a whole different light. in instantly became a massive action vehicle, or so it would appear. but that title was a fraud. in fact, it isn’t even clear in the movie who the five different armies are (at least not all five of them.) and there certainly isn’t some great battle like this title would have you believe. the return of the king (the third lord of the rings movie), had a massive battle with different levels of attack from different forces. this movie does not.

the other thing i believed about this movie was that it would bridge the hobbit trilogy together with the lord of the rings movies, offering up lots of connections between the two. that didn’t happen either. the sauron story, which should have had a much more significant place in this movie, was relegated to one quick scene in the earlier portions of the film and then never heard from again. to call it a wasted opportunity would be generous. the truth is it was more of a blunder. they had it right there in their hands, and they never even tried to get it right.

despite these problems, there are some things in the movie that definitely work. the way the movie opens, with the culmination of the battle against smaug that ended the last movie, is pretty neat. it’s always fun to begin a movie with a thrilling action sequence that grabs you right away. the downside of beginning this way is that it kind of points out that this probably should have been the ending of the last movie. if that was the case, than this third movie would not have had to be made. instead, the dragon death carried over just so that they could try and justify having a third film.

after smaug is slain, we start spending some time with the dwarves in their mountain. bilbo (Martin freeman) tells the other dwarves that thorin, their leader, has gone mad with the amount of treasure now in his possession. bilbo isn’t far off from the truth. thorin has taken on the persona of boromir (sean bean), from the lord of the rings trilogy, or any other character plagued with the spell of greed that was caused by the ring. only here, there is no ring. instead, it’s the arkenstone, a valuable gem, which is making thorin mad. only he doesn’t have the arkenstone. basically, the whole thing doesn’t really make sense, but it’s a lazy attempt by peter jackson to make this movie very similar to his others. he wants a character that is plagued by the greed of some kind of magic spell. it doesn’t really work here.

this is when the elves and men join forces to come to thorin seeking what they have been promised. apparently he promised them that if they helped him defeat smaug, then he would repay them with treasure. only now that smaug is slain, thorin is going back on his word. that element of the story is fine, but then the movie introduces a treasure of the elves that is in thorin’s possession, and it’s the first we are hearing of it. there were two other movies that came before this one which might have mentioned the elf treasure in the mountain, but instead, we are just supposed to accept it here, for the first time, and move on.

the battle that the title refers to isn’t really much of a battle at all. the goblins and orcs attack and suddenly the men and elves turn their attention away from the dwarves to fight them. eventually more dwarves show up, but it’s all new characters that we’ve never seen before, and so it doesn’t really have much meaning. it’s not the same, for example, as when in the return of the king, two different armies of men which we had been following in other, previous films (like rohan’s troops, led by bernard hill) suddenly arrived on the battlefield.

speaking of the men, there really isn’t a lot that comes of them in this film. the men are clearly supposed to be one of the armies, yet here they constitute little more than a group of fishermen from laketown. why didn’t armies from gondor and rohan come to join in the fight? not only would that have increased the momentum and scope of the movie, but even more importantly it would have helped with the bridging of this series with the lord of the rings movies. instead, we never even hear about gondor or rohan in these movies. it’s as if those kingdoms didn’t exist. this is another major blunder of the film.

there are other problems with this movie as well, such as a cartoonish villain, a sniveling hunched over king’s assistant who is clearly just meant to be another version of wormtongue from the lord of the rings films. the character is used for comedy here, only he’s not very funny at all, and is more annoying than anything else. despite flaws like this, the action is still pretty decent, especially with the one-on-one battles that take place towards the end. each of those orc leaders gets their own fight scene (one against legolas and the other on the ice against thorin,) and both scenes are pretty cool.

the hobbit: the battle of the five armies is the movie that never needed to be made. some people say this trilogy could have been made in one movie, since after all, the hobbit is just one book. i disagree. the first two movies in the trilogy were both solid films. they were both compelling, but they were also a little bit too long. instead of making three films, some of the content in those should have been cut, and whatever needed to be told from this thrid movie (really just the death of smaug), should have replaced those extra scenes. i was an advocate for a trilogy when i heard the idea originally proposed, because it meant more time spent in this peter jackson world of middle earth. after all, nobody does magical fantasy better than jackson. but this was the movie where he finally dropped the ball. the battle, which the title refers to, wasn’t really a battle at all. there are many things this movie should have gotten right, and didn’t, but that one, more than any other, is the most obvious. this is a pretty lousy movie that has a fine beginning and ending, but contains nothing of any importance for the vast majority of the film which makes up the middle.