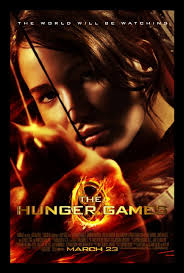 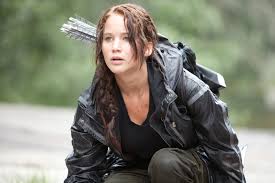 Somewhat creative in it’s details about the future world, but an otherwise not very exciting movie that doesn’t come close to capturing the intensity of the book.

The Hunger Games, the book, was brilliant. Sure it told a story that we’ve heard before in both novels (Lord of the Flies), and movies (the Running Man, Battle Royale), but this book combined all of these other ideas with it’s own creativity about the future and a capital city that created the games to punish all of the other districts for an attempted rebellion. The book was also graphic in it’s description of kids killing kids, which is something the movie side-steps, avoids, and tries to get past every chance it can get.

That’s one of my biggest problems with the movie. The violence is weak. The movie’s director, Gary Ross, is a PG-13 generic kind of filmmaker. His best movie to date is Pleasantville, which was absolutely a movie for everyone. It was a movie you could take the whole family to. And that’s the guy they get to direct a movie about kids killing kids in an all out tournament of hunting and survival? The studio got him because they knew he would make a movie that kids could get behind, like they did for harry potter and twilight. And that’s exactly what he gave them.

So we have this movie about killing that practically hides the killing from us. It uses blurry vision to avoid showing us clearly what is happening, a couple of times. One times there’s a release of stinging poisonous insects that cause the blur. Another time it’s an explosion. Another time it’s just the excitement of the games beginning and everyone running at each other. Basically, this movie uses any excuse it can think of, and that’s a problem.

Getting past the lack of violence problem, the movie isn’t all that great in plenty of other ways too. it starts off with way too much handheld filming, where the camera is constantly moving past and around the images, almost like showing us flashes of them. this is what michael bay tends to do, and it’s a problem. it’s as if they don’t think the audience can handle a steady shot that lasts for more than a second. i understand the occasional use of handheld camerawork to make the audience feel the sort of confusion and discomfort that a character is feeling at certain times, but to overuse it just makes everything a mess.

the movie has a big job ahead of it because it needs to explain a lot. in some opening titles, the rebellion is explained as is the way that the hunger games came about and even a little bit about what the hunger games are. but they don’t get into why it’s called the hunger games, and what it has to do with food. only if you are really paying attention and know the books do you notice the talk about rationing for food and what that might mean.

the movie does spend about half of it’s time preparing and leading up to the game and then the other half playing the game. that’s seems like it a nice touch, but somehow it’s not enough. the explaining never gets into why certain people have their names in more than others, or how everyone is made to watch the games, even if they don’t want to. and while about half of the movie is devoted to the competition, it just doesn’t feel like this character, katniss, is really out there trying to live. the sleeping and eating scenes are rushed so that we barely have the chance to take them in.

so clearly there is a lot that doesn’t work for the movie. but there’s also a lot that does. the casting and the many different, colorful characters are a lot of fun. woody harrelson, in particular, steals the show as haymitch, one of the only likeable guys who has the kids in his corner. he trains our two heroes in the ways they need to act and present themselves and he supports their every move. at the same time, however, he’s got an attitude and a chip on his shoulder and isn’t afraid to show it.

some of the other enjoyable characters are played by donald sutherland, wes bentley (nice to see him doing something high profile again since american beauty), lenny kravitz, and stanley tucci. every one of these actors finds the right tone for their character, and gives us something kind of unique. sutherland plays the head honcho who is not okay with any differentiation. bentley is like his assistant, the man put in charge of making these games. he’s the head gamemaker and watching him work is a lot of fun. kravitz, like harrelson, plays the other supporter of the kids, and he’s more of a confidence booster than the wisecracking harrelson. and then there’s tucci as the blue haired talk show host. his dialogue might be generic, but he just has an evil way of delivering it all for the mainstream to take in. he’s an absolute phony and it shows.

i like the details this movie puts in about it’s future world. when the kids arrive at the capital and look out the window of their train, the awe and contradictions between this new land and the one they came from are amazing. so is the technology that the gamemakers use to create obstacles once the games have begun. i love when they create a fire storm to move katniss over to the direction they want her. it comes complete with giant fire balls flying out at her. and the creation of the wild dogs, seeing an artist present it to bentley, is pretty cool too, even if it doesn’t go for the cool angle the book did about saying that the dead kids were turned into these dogs.

the movie ends up being just okay. there are plenty of cool details and nice moments (i love how carefully it shows that katniss sleeps in trees, tying herself to the trunks with a belt), but a whole lot of it feels rushed. the lack of violence is a problem, and there were lots of opportunities where the movie could have been even more creative. the training scenes, for example, are nothing special. they should have used cool technology to give the kids obstacles that challenged them. but the movie deserves a lot of credit for it’s casting. elizabeth banks might be an ordinary casting choice (and she happens to be the dullest character in the movie), but wes bentley certainly is not. neither is lenny kravitz. these are bold moves for such a high profile movie and i applaud it for giving these actors the chance to prove themselves. the movie is a mix of good and bad. i’m sure it’s a lot better for anyone that hasn’t read the book as well, and doesn’t know how everything is going to turn out. as someone who loved the book, this movie doesn’t come close to capturing the excitement, but it certainly tries.