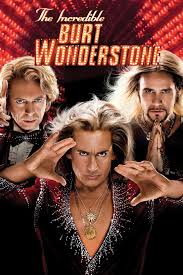 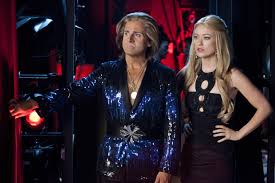 A very cliched movie about the old guys vs. the new, with some occasional laughs, but mostly just a routine story.

The Incredible Burt Wonderstone is a movie that is very familiar. it’s the story of two guys who have their way of doing something, and performing, and then a new guy who comes along and shakes everything up. he’s the enemy, of course, in a movie that has an incredibly simple plot. just look at the four principle actors and the parts they are playing to get an idea of how basic the components to this movie are. there’s the hero (Steve Carrell), his best friend (steve buscemi), the girl (olivia wilde), and the villain (jim carrey). it’s right out of shrek, with the four actors playing the four cliched roles. and each one of them is introduced in that order, so that it’s a while before we get to meet the jim carrey character, because first we have to meet the friend and the girl. there are things that do work in this movie, such as steve gray (the jim carrey villain), but most of the time, it’s just a very simple movie with nothing new or creative to offer us

The Incredible Burt Wonderstone is the same movie we’ve seen again and again, many times over. There are the older guys who have been doing the same routine for years and are heroes. Then there’s the new guy who shows up and has a totally different way of doing things and steals their thunder. and he becomes the enemy. the heroes start out on top of the world and then face problems when the new guy shows up, only to come back and kick the new guy’s butt at the end. it’s been done a thousand times over. now usually a plot like this is reserved for either simple competition comedies (will ferrell movies, like taladega nights, blades of glory, and the campaign,) or animated films (the incredibles, despicable me.) Sometimes it’s a movie that fits both categories (will ferrel’s animated film megamind.) the fact that it’s a plot that so often shows up in kids movies should tell you something. it’s just a little too simple, and a little too cliched.

here, we start the movie in a flashback to when our magicians were kids, and it’s a scene that really doesn’t add anything to the movie. these kids were bullied for liking magic, they decided to be magician friends together, and wrote all of their tricks down in a book. great. lots of movies begin with flashbacks to being kids, but only a handful of them are really necessary (like in the living teddy bear comedy ted, it actually was important to the plot.) from there, we move to vegas, a few decades later, and see our boys performing. there’s burt wonderstone (steve carrell), and anton marvelton (steve buscemi.) they work for a hotel in vegas, doing nightly performances, and their boss is a man named doug (james gandolfini), who owns the hotel.

at the start of the movie, we watch a show, see them do a few tricks (none all that interesting), and then go back stage after the show and argue with each other. when their female assistant has a problem with their arguing, wonderstone is so mean to her that she ends up quitting. okay, so this guy is a jerk at the start of the film. i guess this movie will be about how he learns to be nice and changes his ways. is this movie going for every cliche in the book? it sure seems that way.

for a while, there’s really nothing going on. when that girl quits, the boys quickly grab a stage producer, jane (olivia wilde), and throw her into a costume. she has never done this before, and the boys insist that it’s simple and nothing to it. her first trick is going in a tight rectangular box with wonderstone, as marvelton stabs swords through the box. we get to see the trick from the inside of the box, which is pretty cool, but as far as story or comedy, there’s not much happening here.

the movie really seems like it’s just wasting time until jim carrey shows up as the competition. we get scenes of burt taking home women, and what he does with them once he has them at his place. he makes them sit on a bench in front of a green screen, and photographs them, just to make it into a photo of him carrying them. it isn’t even funny, and there’s way too much effort and time put into the joke. the whole plot about adding olivia wilde to the mix is also just filler to get us warmed up before we get to meet jim carrey.

and then we meet him, as carrey plays steve gray, a chris angel-like dark magician. gray’s tricks are more like torture exercises, as he does ridiculous things with his body. these are not magic tricks, but more like simple stunts from the tv show jackass. one trick is to see how long he can go without blinking, and while doing this, he has lots of pepper spray sprayed into his eyes. another trick is that he spends a night sleeping on hot coals. and who can forget his first trick, when he cuts his face and then pulls a card out of the wound. this stuff might be crazy and sick, but it’s also the funniest stuff in the movie.

i always knew jim carrey would be the funniest part of this film. you can tell it from the trailers, and also the way that carrey is only a supporting player here. he’s the guy you wait for and enjoy the limited amount of time you spend with, as opposed to the steve carrell character who is in nearly every scene. but carrey’s role is hardly enough to make this movie work. of course, he’s not just a magician who steals the spotlight from them, but also an absolute jerk. it’s just another cliche that this movie can check off its list.

i suppose the steve gray character had to be a bad guy, otherwise he wouldn’t really be an enemy, but just a guy who does more popular tricks. He would have been competition, but not a villain. and so this movie goes the usual route of having gray put the boys out of business and doing it while being incredibly disrespectful and unkind. there’s a fantastic scene before they leave the profession, where they attempt to copy gray’s style of trick work, by doing something called “the hot box.” it all goes horribly wrong, but it’s a lot of fun watching how the whole thing falls apart.

and then there’s the inevitable act where our heroes go their separate ways and give up the vegas spotlight. this separation act is in more movies than any other cliche plotline in this film. it’s often used in romantic comedies, before the members of a couple get back together in the end. do you think that wonderstone and marvelton will get back together here? is there really anything to think about there? during the sad, lonely act, wonderstone takes a job at an old age home, where he meets alan arkin, who plays a magician that used to inspire wonderstone when he was just a boy.

the movie does pick up some steam in it’s final scenes. first there’s a child’s birthday party, and then a big performance, and it ends up being pretty cool. between the way the end of the movie goes (i love how they show us the way they do the final trick, literally moving bodies around), and also the jim carrey role, this movie does have some things going for it. the steve gray stunt where he holds his pee in for days, for example, is made all the more funny because of the graphics they show of the outline of a man with yellow liquid inside him. there are great interviews with doctors who say things like, “right now he has more urine inside of him than water.” if only the rest of the movie could have been handled in this smart or funny a way. instead, burt wonderstone tends to go for the cliched move more often than it doesn’t, and that winds up being a problem.