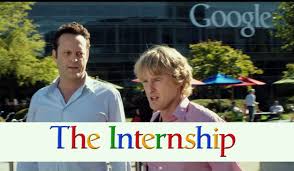 The stars have definite likability and are good together, as always, but the movie itself is very plain, unfunny, and not creative at all.

There are a lot of problems with this movie, starting with the fact that it’s not very funny. that’s due to many factors including the simple-minded plot based on just one joke, about how these two guys are not in touch with today’s youth. another problem is that the movie is rated PG-13 when clearly it should be rated r. vince vaughn works best when he has the freedom to go all out, with an R   rating and nothing holding him back. here, he is restricted, as he has been in so many of his movies from the last ten years. the humor’s not there and the plot is simply about two teams competing in different challenges. none of it is original and none of it is very good.

Vince Vaughn has some terrific charm. We’ve known that for a while now. the guy has definite movie star likeability when it comes to comedies and playing a sweet guy with a motor-mouth and big ideas, and even when a movie doesn’t work, at least he’s always decent in it. that seemed to be the case for a while, as vaughn continued turning out movies that weren’t great, but still held up. movies like dodgeball and the breakup. but then vaughn started making movies with plots that either seemed too familiar or just simply uninteresting. these were movies like couples retreat and the dilemma. unfortunately, the internship is another one of those.

that’s especially a shame because the movie reteams vaughn with his wedding crashers co-star owen wilson. wedding crashers was absolutely one of the better vince vaughn movies. in fact, it was the last great vince vaughn movie, ending a period that included such films as swingers, made, and old school. he was even great as the villain in starsky and hutch. but that ship has sailed on a long time ago at this point, (Nearly a decade ago, with wedding crashers in 2005), and while vaughn hasn’t necessarily lost his charm and appeal, he just can’t seem to find the right script and movie to show it off like he used to.

the internship is another pg-13 stupid movie. it’s a one-joke film and that one joke is that these two guys are so far removed from today’s kids that they have no idea about what’s going on with youth culture. this applies to the work force, which is now all internet savvy young adults, ready to program whatever you ask them for at the drop of a hat. It also applies to society as these guys don’t know pop culture references such as from x-men or harry potter, and the movie milks that idea every chance it gets.

the film starts with these two guys as salesman. this is no wedding crashers sequel, by any means, but considering that they were a kind of salesteam in that movie, (selling love, helping couples put aside their differences to be nice to each other), one could look at this movie as a sort of follow-up, starting with them losing their jobs as salesman and having to start all over again. of course that wouldn’t explain the absense of the women they ended wedding crashers with (rachel mccadams and isla fishcher), which is why this definitely is not a sequel, but more of a movie that takes the same formula and puts it into a new setting.

only unlike wedding crashers, this movie doesn’t work at all. there are all sorts of reasons for why that is the case, but one of the main ones is that the movie is just too soft. it should have gone for an r rating instead of a pg-13. there’s a reason why vaughn’s best movies (other than swingers), are all rated r. this includes the watch from about a year ago, which would have been a very different movie had it been rated pg-13. vaughn is an actor who likes to cut loose and push the boundaries with what he says. you can’t exactly do that on a pg-13 rating. the watch didn’t need to be rated r and neither did old school or wedding crashers, but they were about a thousand times funnier because they had that rating, and an open door to go as far as they wanted so long as it was funny.

after these two watch salesman billy (vaugn) and nick (wilson) get laid off by their boss, john goodman, the real plot of the movie begins. the laying off part is an introduction, starting with them going out to dinner with a client, wining and dining him, before he lets them know that they have are no longer in business and that their boss has yet to fill them in. i like that when they do go to meet with their boss, he tells them that the reason why they will no longer be employed is because watches are no obsolete and everyone just checks their cell phones to get the time. this sets the tone for a movie that will be all about the new generation.

the boys gets the idea to try out for a job working at google. billy gets the job interview setup and brings nick along. he finds nick working for his brother-in-law, (played by a great cameo appearance of a name star), in a bed store, and this happens to be the funniest scene in the movie. it’s the one scene that goes for sexuality and vulgarity the way i wish other moments in the movie did. just look at how this movie goes into a strip club, for example, and yet refuses to show nudity or anything interesting and sexual at all. who are they kidding?

the boys sit down at a public library for a chat over the internet with some google executives and they end up qualifying for a spot in the google intern program. that means they will be put on a team and given projects to do. i liked the scene in the library with the two of them paying off kids to use the computer and having to push their heads together to be seen on the monitor, but that fun element disappears pretty soon afterwards.

the two character arrive at the google headquarters and the fun basically stops. they are now the outcasts, surrounded by college students who are about two decades younger than them. these guys are about forty and the college kids are twenty. the movie now proceeds with a series of competitions. they have to design an app, compete in a quiditch game, from the harry potter books, and then make an internet advertisement for a company. all of it is predictable and none of it is very interesting or funny.

the internship is a routine movie about competition and the good team versus the bad team. there are very few surprises, if any, in the movie and it really is a one-joke film. you constantly have to just go with it, instead of questioning ideas, in order to even come close to enjoying this movie. for example, just because they are forty and not twenty doesn’t rule them out from knowing about x-men or harry potter. if they were sixty, than i could understand. the movie makes the case that these guys were teenagers in the eighties and so their pop culture references are movies like flashdance, but even still, the movie has little else going for it besides this simple idea. it isn’t funny, and that’s the number one worst thing about it. sure vaugn and wilson have charm and balance well off each other, with vaughn as the aggressor and wilson as the sweet heart, but the plot is weak and the jokes hold back. this is not a very good movie.