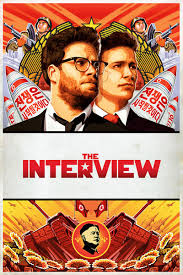 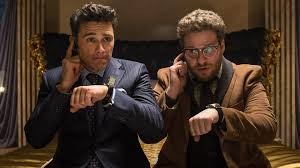 A funny and entertaining movie, this one plays on the same kinds of characters that were featured in pineapple express and gets a hell of a lot of jokes out of them.

The Interview continues the hot streak of seth rogen and friends that shows he can really do no wrong. at least not when he’s the one in control and in the driver’s seat. sure there was green hornet, funny people, and observe and report, but when rogen teams up with guys like franco (such as in pineapple express), or just has a stake in the movies himself (he directed this movie, and also this is the end), the results are always a good time. the interview takes its tune overseas spending at least half the film in north korea, but the results are no less funny than usual. that’s because both rogen and franco are playing their go-t0 parts, which they play so well. sure, this movie isn’t one of their best, but it does the trick, just like neighbors did for rogen earlier this year.

The Interview is a funny movie. It’s not that different from most of these Seth Rogen – James Franco movies, as far as tone and humor, and that’s a good thing. Despite this film having a fish out of water, international setting and falling into the political – spy genre, (mixed with comedy of course), the characters still feel very familiar. That’s because these two are basically playing versions of their pineapple express characters. Franco’s character, here, might not be the ultimate stoner, but his he is still the kind-hearted idiot that we love to laugh at. And Rogen’s rational, serious, down-to-earth main character, is just as funny. The roles work and so does most of the movie.

The film opens with a great Eminem interview. We are quickly introduced to Dave Skylark (Franco) as he interviews the rapper on his show, Skylark tonight. Behind the scenes we see Rogen’s character, Aaron, as a producer in the editing room. He watches from overhead and makes comments to the others in the studio. When Eminem lets it slip that he’s gay, the reactions from both Aaron and Dave are pretty great. At first it’s a sort of double take situation, where both men aren’t sure if they heard correctly. Eminem just continues on, possibly not realizing what he just said. When it happens again and again, Aaron starts getting overjoyed with excitement, calling up people, putting it out there that this interview is suddenly national news. Dave, meanwhile, starts analyzing some of Eminem’s lyrics, right there in the middle of the interview, slowly going over these words as if they now have a whole new meaning.

Eminem is but one of many celebrities featured and harpooned in this movie. Like knocked up, which had Katherine Heigl working playing a reporter for e news, and therefore had her interviewing lots of celebrities (Franco, Steve Carrell, Ryan Seacrest), this movie does the same thing. There’s Rob Lowe, Joseph Gordon Levitt, and fake stories brought up about Matthew Mcconaughey and Niki Minaj. The jokes about each of these celebs are great. So is the way the movie doesn’t hold back with what it will say about each of them. Pretty soon the tone is set, the laughs are coming at a rapid pace, and we are ready to dive into the actual story of this film.

That gets started when Dave throws Aaron a surprise party and Aaron ends up running into some old classmates there. One of these classmates actually gives him a bit of a hard time, talking down to him because his show is pop entertainment instead of serious new story material. This gets Aaron thinking. He wants to be taken seriously. He’s had enough of the stories that are basically just dopey gossip and that really don’t matter at all. Aaron brings these ideas to Dave and together they decide to interview Kim Joong Hyun, the president of north Korea, whom they have been told is a fan of their show.

Aaron makes a phone call to the North Korean office of public relations and leaves a message. When he gets a call back, Aaron first thinks it’s somebody pranking him. Then he takes the call and ends up being asked to fly somewhere in Asia to take a meeting. Aaron goes. At this point, most of the jokes have been working, but there are definitely a handful that have not. The Lord of the Rings references that are made during Dave’s speech at the party are kind of dumb. Especially when one guy shouts out, “One ring to rule them all.” I heard that joke in Clerks 2 a number of years ago, and it wasn’t very funny then. Another joke that doesn’t work is when Aaron gets that phone call while in the back of a cab and starts doing an Asian accent. He even pretends to not know he’s doing it, saying, “me so sorry… I’m so sorry… I’m sorry.”

Luckily most of the humor is much better than this. The scene where Aaron goes to meet the North Korean representative is great, as he waits so long that he falls asleep in a field and becomes incredibly dehydrated. He ends up begging for water as the North Korean helicopter stops by just to agree to do the interview, and then takes off again. Aaron can’t believe that he flew halfway around the world just for that. Couldn’t they have done that over the phone?

Right before leaving for North Korea, Dave and Aaron are approached by the C.I.A., they send over an attractive brunette named agent Lacey (Lizzy Caplan), and she convinces the boys to work with her and to agree to kill Kim Joong Hyun. Aaron is onto her schemes and tries to tell Dave that she is honey-potting him, meaning seducing him in order to get her to do what she wants. this idea becomes very funny when they go to meet agent lacey again, this time at C.I.A. headquarters, and she is no longer wearing glasses. Dave was convinced the glasses were real, but now he knows that it was all part of the honey-pot plan to make her look more attractive. When he tells agent lacey, “I told Aaron that bitch is as blind as a bat,” it’s hilarious. In fact, all of agent lacey’s reactions to Dave are pretty great, including how she reacts to his comments about whether or not Kim actually does pee and poo.

Once in North Korea, the boys have a few problems with their bag that contains the ricin poison they plan to use on Joong Hyun. First, Dave switches the bags up to go with a more stylish one. then when questioned by a reporter about the interview he is going to do, Dave lets it slip that he’s going to give Kim something with his hand. The reporter thinks he means a handjob and Aaron can’t believe Dave is even saying anything about this at all. Finally, when they do reach North Korea, the guard intercepts the ricen in a pack of gum, where Dave has hid it, and one of them even throws it in his mouth and starts chewing it. This becomes a running joke for the rest of the movie, with the boys constantly checking up to see how that guard is doing. It reminds me of the Crispin Glover bell boy in Hot Tub Time Machine, where the boys knew he was going to lose his arm sooner or later, and so they kept checking on him to see when it would happen.

When Dave and Kim finally do meet, it’s not for the interview. Instead, it’s to spend the day talking and hanging out. The two of them become great friends, drinking, doing drugs, sleeping with girls, and bonding over Katy Perry. They even ride in a tank and fire it off into the mountains. Everything seems to be going great, with Dave starting to believe that maybe Kim is just misunderstood, but then he catches onto a few things, like a fake grocery store that actually doesn’t have any groceries in it. The turn and things that Dave notices here (including a scene where Kim suddenly goes off about his evil plans, while speaking to his commanders in a banquet hall), are some of the best story elements in the movie.

The Interview is loaded up with great ideas (like a Koren tiger attack on Aaron), and most of them work. It’s a fun movie with both Rogen and Franco really showing off their skills. Like most of their films, this one includes slow motion montages of them getting hammered, and fun phrases that they throw around, be it honey-potted, peanut butter and jealous, or hate us cause they aint us. Rogen and Franco are perfect in their roles. These guys can pretty much do no wrong. Their film this is the end certainly proved that. The Interview isn’t one of their best movies, like that film or Superbad is, but it’s certainly a lot fun.