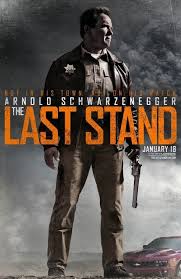 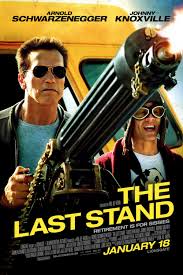 It’s fun, and has some good action, but this is far from anything new or anything great.

The Last Stand is Arnold Schwartzenegger’s return to action and to headlining his own films. It’s a B movie action picture all the way with a predictable story that feels very familiar, but what’s cool is the way they make it feel like a modern western. Now this is not a western, and is instead about a police officer. It involves cars, busses, and a battling gun. But something about this movie, especially the shootout in the town scene, definitely feels like the old west. There is humor here, courtesy of guys like Johnny Knoxville and Luis Guzman, but most of it is not very funny. Instead, it’s the occasionally clever ideas (the electromagnet), that propel this movie along, as well as its entertaining action scenes. Aside from Arnold, the cast is also built up a little by Forest Whitaker and Peter Stormare. These are the guys who really help the movie out. It’s definitely familiar territory, but still a fun film.

The Last Stand is one of the first of Arnold Schwartznegger’s comeback movies,  after he left his job as governor of California. Arnold started returning to movies by cameoing in the Expendables for his buddy Sylvester Stallone. After that, he must have had so much fun doing the big action thing again, that he jumped right back into the saddle with this movie. Unfortunately it wasn’t advertised very well. The movie has a generic title, but aside from that it is Johnny Knoxville, of all people, who is promoted as the costar. Here’s a guy who has made fewer movies than anyone else on the roster. And he’s being sold on the posters more than guys like oscar winner Forest Whitaker. Ridiculous.

And then there’s the movie’s trailer. Once again Knoxville is promoted all over the place even though he’s barely in the movie. Now, I’m not upset that Knoxville is barely in the film. In fact, just the opposite.  With Knoxville as a major player, this movie would have been more of a stupid comedy than anything else. But with Whitaker as the real costar, the film gets much more credibility and dramatic tension. Add in Luis Guzman and you suddenly have a decent cast. And let’s not forget that Arnold is the guy who carried so many action movies on his own and is now back headlining once again.

The movie takes a while to get going. It actually doesn’t get interesting until an escape scene, some ways into the film. Before that, it’s business as usual in this small town where Arnold plays sheriff Aaron Shiver. He strides into the coffee shop and everyone knows him. Everyone except for the two suspicious-looking characters who have the big-rig truck parked outside and sit at a table finishing their coffee. No sooner does Shiver step into the place, then do these guys pack up and leave. This is Peter Stormare, the great villain actor (Fargo being his best role,) and another man. Shiver is onto them from the moment they open their mouths to speak.

From here we meet some of the locals on the sheriff’s team. There’s a  guy who wants to leave the job because he just feels it’s not for him anymore. The conversations between he and Shiver would be much more interesting if we actually knew a little bit about this character and had already started to care for him. That’s when you bring in the potentially deep conversations. If you start out with them, we aren’t invested in the character yet, and so don’t really care. This deputy who is looking to quit, has a friend who is behind bars at the local jailhouse. The friend is Frank, (Rodrigo Santoro) and he used to date Sarah (Thor’s Jamie Alexander)  who is now on Shiver’s police force. So is Luis Guzman. We even meet the local jackass (no pun intended), played by Knoxville as a guy who stores a boat-load of guns and has his friends over for target practice.

All of this feels like the same kind of thing we’ve seen many times before. None of the characters on Shiver’s team are that interesting, and with the gun shooting, the movie even approaches  eye-rolling dopey material. But then the movie suddenly takes off. It happens in a very unexpected way with a prisoner escape. Forest Whitaker’s Agent John Bannister is running the transport of Gabriel Cortez, one of the worst criminals of all time. And it’s during the route they take to bring this prisoner to a new location that the convoy of FBI cars and vans is attacked. We’ve seen this kind of thing a ton of times before, such as in Mission Impossible III with Phillip Seymour Hoffman being busted out. Only here it is done in an incredible way, including the use of a giant electromagnet to lift the FBI van into the sky and then put it down onto of a building. This is cool stuff.

Meanwhile, the Sheriff’s men go to check on a farmer on the outskirts of town who they haven’t heard from in a few days. Turns out the farmer is dead inside of his house. When Shiver’s men are at the farmer’s house and turn around, they see a bunch of suspicious characters building something in secret. When these guys spot our police officers, a shootout ensues. This is the first real indication for Shiver and his team that something big is going down. Shiver gets a phone call from the FBI shortly after this, informing him of Cortez on the run and how the criminal might be headed into Shiver’s town, driving through it in order to get to a bridge he has made which will take him right into Mexico.

The nighttime shootout is okay, but not nearly as good as when the men show up in Shiver’s town. That crossing into the town sequence is fantastic. It becomes an all out gun battle with many characters getting up on rooftops, just like in an old western, to plow each other down with gunfire. The best moment, of course, is when Shiver uses a bus that spins around to the back, pops opened the back door, and reveals a giant gatling gun cannon which he unloads on the bad guys.

With regards to action, this movie definitely works. The gun fights are staged masterfully, such as one where a villain is chased up the stairs of a building and double teamed by two of Shiver’s men who take him from either side. When this villain tries to shoot one of the policemen, the other one pops out and fires on him. This is an enjoyable film of B movie caliber, with good action and a pretty simple and straight-forward plot.

In the final acts of the movie, things become about the one-on-one situation, and at that point some of the excitement is lost. I would have preferred more of a mystery angle than just pure action. The one-on-one climax takes us through cornfields and then onto a bridge. Arnold is too old to be doing this kind of thing. It’s an okay scene, but the heart of the movie was definitely everything involving this villain and his team of men. Peter Stormare was a great villain (as he always is.) Once he left the film, it went considerably downhill.

The Last Stand is far from a great movie, but it is certainly a good deal of fun. This is Arnold back in decent form, kicking ass and taking out the vermin. The local town and band of misfits on his team element is kind of weak, but what works about this movie is having Forest Whitaker run the FBI task force and the men that the head villain has working for him. In what other movie would Peter Stormare be considered only the second to main villain? There are two scenes in the movie that are incredible, the escape scene and the bus scene. The rest of the movie is just pretty good. Definitely nothing special, but this movie is still an enjoyable time.