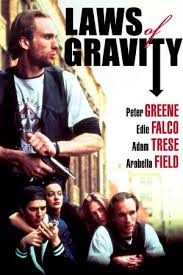 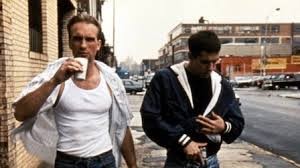 An often smart and Gritty movie about the action and drama of street level criminal life.

Laws Of Gravity is a movie that is so indie, and so realistic feeling, that it is almost as if the characters from the movie “Kids” grew up, and this is their sequel. These are grown men in the movie, or at least they think they are, but they do petty crimes, insult and fight with each other every chance they can get, and make incredibly stupid decisions. Still, they are tough guys who don’t take any shit from anyone, and spending time around them is a lot of fun. They are low-level gangsters; all the same character traits, but none of the class.

Peter Greene plays Jimmy, the star of the film. Jimmy is an even-tempered rational guy, and like all great movies that take place in a violent and explosive world, he’s the character who navigates us through the whole thing. He’s the guy we can actually relate to. Greene is a talented actor, at least at playing scumbags. From the usual suspects to judgment night, he never seems like such a nice guy. Here, in Laws Of Gravity, he gets a starring role and gets to finally show a little heart.

Jimmy has a number of problems to deal with. First off, he owes money to a guy named Sal and doesn’t really seem to have any way of making this money and paying the guy back. Aside from that, his best friend, Jonny, is in trouble with the law. Jonny boy is the wild card of the movie. He’s the Joe Pecsi from Goodfellas, the best friend who can’t be trusted and who has an electric edge to him, totally unpredictable and violent at all the wrong times.

At the start of the movie, Jonny is talking about how he was supposed to go on trial today, but decided not to go. He just wasn’t interested. He walks around with Jimmy talking about it, and then they go to Jimmy’s house where we meet both of their girlfriends. Jimmy is dating Edie Falco from the sopranos, when she was still pretty young. She’s in her high twenties here, whereas she was probably in her high thirties when she played tony soprano’s wife. Jonny also has a girlfriend there, a Spanish girl named Celia, who has no problem bothering and pestering her boyfriend. She knows which buttons to push to get him all riled up and he reacts by trying to hit her just to shut her up.

The boys walk around the streets together, running into people they know and stopping to chat. In that way, the movie totally reminded me of kids. This is they, out and about, in their natural habitat where everybody knows them. They pop into a local store and pull paper bags out from their pockets. Then they stuff the bags with whatever they want to take and walk out of the store as if they had the stuff when they came in. this is how they make their money.

A friend of theirs rolls into town with guns to sell. His name is Frankie, and he’s been down in Florida serving time in prison there for the better part of the last decade. Frankie has a chip on his shoulder about the way things worked out for him. He spends his first night staying with Jimmy and Denise (Falco), and while sitting there on her couch; he has an interesting conversation with Denise in which he insults her. He talks about the things she has and her lifestyle and says that it might be good enough for some people. She runs right back at him, saying it’s good enough for him because he’s the one sitting there, watching their TV, and drinking their beer. Clearly Frankie is both bitter and jealous.

The movie takes us to the bar that these guys hang out at every night. And there are constant fights going on there. Anytime a stranger insults one of them or they insult a stranger, a fight breaks out. These fights happen both inside and outside of the bar. There is a little too much of it going on in this movie, but I guess it’s a way of life with these guys and this is what it must really be like. Still, it seems like just about every time they go to the bar a fight breaks out.

The big event of the movie that really gets things going comes when jenny is arrested. Now it’s up to Jimmy to find a way to bail his buddy out. He knows he’s got to do it, but he doesn’t have many choices for how. He needs to get enough money to make the bail, only nobody on these streets is about to lend him any more money then they already have.

This event is what makes Jimmy turn to the guns he is selling for Frankie, and that makes Frankie become the villain of the movie. It’s a final third of the film that really spices things up. Frankie ends up stealing the show in this end portion of the film, showing that he is not someone to be messed with. Before we reached this final third, the movie was mostly about showing the lifestyle. That included not only stealing and bar fights, but also drama between Jenny and Celia. There was the BBQ where he ended up hitting her in front of the all of their friends, and then the way she packed up and left him afterwards.

This movie has been compared to mean streets and there are certainly a lot of reasons to make the connections. Both movies are about New York street hustlers who go from place to place having fights and problems. And both feature a loose cannon friend named jenny boy. But if you think about it, mean streets is in a lot of ways just an elaboration on something like breathless, where a guy is a petty thief, thinks he’s on top of the world, has the admiration of his girlfriend, and finds himself facedown in the gutter. I liked laws of gravity a lot because it felt very gritty and realistic, but at the same time it really did have a story to tell about this friend who rolls into town and shakes things up by employing his buddies to help him sell some guns. It was a powerful and exciting movie and also pretty smart.