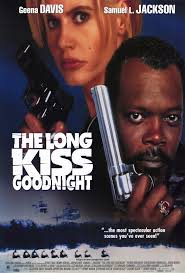 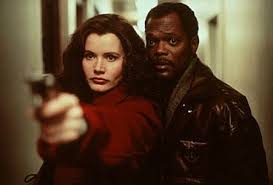 A creative action spy thriller that has the perfect B movie, campy feels and humor going for it.

The Long Kiss Goodnight is the original amnesia movie of a person who wakes up with no memory to slowly learn that he or she is a spy. The Bourne identity might have been written first as books, but long kiss preceded it to the big screen and delivered a movie with a very different tone. Whereas the Bourne movies have always been serious and gritty, the long kiss goodnight is full of comical and campy fun. It’s not a comedy, but it’s certainly an over the top action movie, heavy on the effects and light on the realism.

The movie stars Geena Davis as a woman living a happy life with a husband and child. Her voice over opens the movie to tell us that she was just “Born” seven years ago when she woke up in this body, pregnant, and not knowing who she was. She met and married this man and now they live a quiet and peaceful life together. They host Christmas parties and participate in local parades, but deep down, Davis’ character, Samantha, really wants to find out who she was.

For this reason she hires private detective Samuel L. Jackson to look into any clues about her past. Jackson’s character, Hennessey, represents the comedy of the movie. He’s the wisecracking sidekick and boy does he bring a lot to the table. His character has but three things on the mind, booze, sex, and making jokes. When we meet him, he’s extorting money from a wealthy married man by impersonating a cop and catching the man in bed with a prostitute. Only the prostitute is really Hennessey’s partner, in on the gig to set this guy up.

We don’t really move into the spy stuff for a while, and that’s a good thing because it both introduces us to the characters and also allows the mystery to slowly work it’s way in with clues. Like a prisoner in jail who sees Samantha’s image in the parade on TV an then freaks out about it. We don’t know why, but we sure are curious to find out.

When things finally do catch up to Samantha and come to her front door, literally, the party truly begins. Samantha handles an assassin and then goes on a road trip with Hennessey to look into an old suitcase of hers that was found in a motel where she once stayed. This suitcase contains further clues that lead her to a man who claims he trained her (Brian Cox) and another man who says he used to be engaged to her (David Morse).

Soon the assassins are coming after her and Samantha and Hennessey find themselves on the run. And once the action begins, it never really stops. Renny Harlin, a director who was at his peak when he made this movie, directed this movie. His previous credits had included die hard 2 and cliffhanger, and this movie capped off his three great action films.

The movie works as a mashing of genres. It is first and foremost an action movie with more stunts than one could ever hope for. But it also has plenty of comedic moments, both orchestrated by Hennessey and Samantha, once she embraces her spy identity, Charlie.

Aside from those two elements setting the tone, there is also the mystery angle of the plot. Samantha used to be a spy working for or targeting the same people who are coming after her now. They all know her and know more about her then she does and that’s kind of a fun storyline to play around with.

With this enjoyable and creative plot working for it, the action is what pushes this movie over the edge and really makes it so much fun. Realistic or not, Renny Harlin seems to have every sequence worked out here to come off exactly as he wants it. So, for example, when they find themselves in a hallway and a grenade lands at their feet, Samantha and Hennessey go running down the corridor as the grenade explodes behind them. The explosion travels down the hallway after them, and they end up jumping out a window just in time. But it’s not over yet. Now they’re falling through the air, from about ten stories up, with a lake of frozen solid ice below them. That’s when Samantha pulls out a machine gun and starts firing at the ice to break it and allow them to crash through it into the water. Any other movie would have ended this action sequence a long time ago, but Renny Harlin has fun with keeping it going.

The Long Kiss Goodnight is a movie from a different time. These days’ action movies all have to be serious, dark, and gritty. Witness the Batman franchise or the relaunching of the Bond movies with Daniel Craig. The Kong Kiss Goodnight was from the time of movies like the rock, where an interesting plot and good action were enough. realism was not an area of concern back then. instead, a little campy humor sprinkled around here and there went a long way. this is still a fun movie, even if they don’t make them like this anymore.