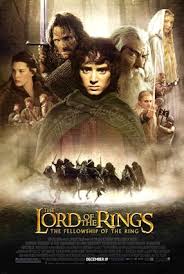 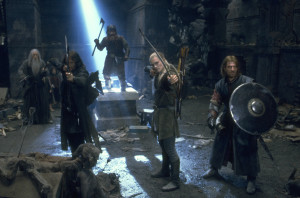 An incredible fantasy film with loads of great action, glorious scenery, and a powerful story of an epic journey.

The first movie of the Lord of the Rings trilogy, The Fellowship of the Ring, is by far the best of the three. As such, it is very likely the greatest fantasy film of all time. It’s the story where the mission is setup, which will continue to span over all three films. It is also the movie that establishes the entire world of Middle Earth, a place where magic and beasts coincide. And it even introduces us to all of the most important characters, and takes it’s time with developing these introductions.

The movie opens with a monologue told by Galadriel (Cate Blanchett) in a voice-over that runs over a little montage of the events of the past. We basically trace through what has happened to the ring, from the moment of its creation all the way to the present day. The ring has gone through many owners and done terrible things to most of them, and we see all of that, as well as a giant war with men and elves teaming up to fight the forces of the dark lord, Sauron. All of this is just in the opening minutes of the film.

Shortly after that, we are in The Shire with Bilbo Baggins and his young nephew, Frodo (Elijah Wood). We learn of creatures called hobbits, and how they live their lives filled with peace, food, merriment, and landscaping. Gandalf, the great wizard comes to visit and Frodo takes a ride with him on his carriage through the Shire. This works out well for us to listen to the conversation and get to know both of the characters while at the same time seeing some fantastic views of the land. And what an amazing land it is, filled with lush greens and wonderful little streams everywhere you look.

Soon we are at Bilbo’s going away party (disguised as a birthday party), and then with Gandalf and Frodo talking about what to do with the ring, back in Bilbo’s house. Frodo is given the task to carry the ring to the Elven city of Rivendell, and then to leave it there. His buddy Sam, (Sean Astin) is asked to go with him.

And so the first part of the journey begins. There hasn’t been a lot of action so far, as most of the movie has been used for setup, but boy is that about to change. Only about a fourth of the film has gone by, and yet we feel like we’ve been through a lot and learned a lot. The dialogue is so well-written, much of it lifted straight off the pages of the Tolkien novels, that it is enjoyable just to listen to the carefully chosen words these characters utter.

The next part of the film involves the hobbits (now joined by two others, Merry and Pippin) running around, trying to get to an inn where Gandalf has promised to meet them. The only problem is, they are being pursued by black riders, men who wear cloaks that cover their faces and resemble the Ghost of Christmas Future from Dickens’ A Christmas Carol (Or just the figure of death). These riders chase the hobbits all the way to the inn, where they meet Aaragorn, and then chase them for a while after that. We get a fight against the riders on top of a small mountain, and then another chase that involves an elven spell in a waterway and massive waves that look like horses. Is this meant to be like the story of the Jewish people crossing the Red Sea in the time of the Exodus? It certainly has the same epic feel to it.

Frodo and his friends make it to Rivendell where there is a great council of all different warriors from Middle Earth. There are elves, dwarfs, men, and even one very powerful wizard. And the discussion is of what is to be done with the ring. After much debate and no clear solution due to a lack of trust among the council members, Frodo volunteers to take the ring all the way to Mount Doom. A small team now assembles of warriors who pledge their allegiance to Frodo and to keeping him safe. This is the fellowship.

While the first half of the movie is all about getting to Rivendell and to this council meeting and then deciding what is to be done with the ring, the second half is much more about action. We meet the different members of the fellowship including some men, a dwarf, and an elf, and then travel with them through open fields, snow covered mountains, and even into underground tunnels and mines. And they come under attack quite a bit.

Our heroes find themselves fighting off a giant sea serpent who hides in the water outside the mines, as well as a cave troll who swings a huge hammer around, and then a Balrog, which is a sort of horned giant made out of fire and smoke. All the while, they are also running across narrow bridges, jumping around crumbling staircases, and dodging soaring arrows that are being shot at them from deadly Orc creatures. The mines scenes, from the moment they enter, until they face the Balrog and then leave, are the greatest scenes in the movie.

But the film still has much ahead of it, including a visit to another Elven land, a rowboat excursion down a river and past great towering statues, and then finally back onto land to take on a new army that we have watched being bred by the evil wizard Saliman, throughout the film. This army is composed of creatures, called Uruk-hai, that are hideous beasts, and we get some wonderful climactic action as our characters face off against them. The movie as a whole is the single film of the trilogy that really feels like it tells the story of a journey from one place to another, with many stop-offs in between. This is the movie that is most focussed on the mission and understanding it, as well as the film that establishes the team that will devote their lives to carrying this mission out. It’s also the movie with the greatest action. The other films might have longer and bigger action scenes, but this movie offers us a variety, taking us to all different locations to watch all different kinds of battles. It is an amazing movie that really does feel epic, just on it’s own, and tells a fantastic story of how the great mission came to be.