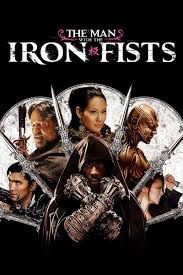 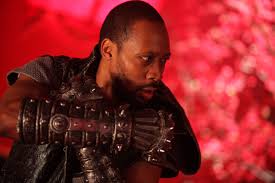 Definitely gets better as it goes on, with some cool action and ideas, but the plot and dialogue are both weak and routine.

This movie wanted to be a cross between Kill Bill and the films of Zhang Yimou (House of Flying Daggers, Hero, Curse of the Golden Flower.) It spent so much time focussing on the set designs and cool looking characters that it forgot about story. The backgrounds mean nothing if the story is weak. The action isn’t anything special either. Occasionally there’s something cool, but it is instantly forgettable here. The plot takes half the film to get going and then once it does, and we have crossed that halfway mark, all we really get is a cliched storyline of a man seeking vengeance. had the story been crafted more carefully, this movie could have been pretty cool.

There isn’t a whole lot to like about the man with the iron fists. That’s too bad, because if only handled with a little more creativity and with a better storyline, this could have been a decent film. For one thing, it’s by two guys who are the protégés of Quentin Tarantino. RZA (who did the score of Tarantino’s kill bill), and Eli Roth, who wrote this film, directed hostel (which Tarantino produced), and starred in Tarantino’s Inglorious Basterds. But the truth is, while his name might be attached in the credits, with the movie saying “presented by Quentin Tarantino,” the film actually has very little to do with him.

In fact, Tarantino didn’t even agree to have his producing credit in there until after the movie was made and finished. In other words, he had nothing to do with making it, and was basically just doing a favor for his two friends, letting his name be used. The reason why this is so important is because Tarantino is a master artist who has never made a bad film. I would have loved to see what he would do with a movie like this, and guess I sort of did when he made kill bill. If he spent the entire movie in ancient china, like this film does, then who knows? But at the very least, the dialogue would have been incredible and filled with pop culture references.

Unfortunately, the man with the iron fists isn’t anything like that. It’s a very simple kung fu movie about some very simple characters. At the start of the film, we meet a blacksmith, played by RZA (who also directed the movie), and are speaking words of wisdom about forging weapons and needing a desire to kill. Why is RZA in this movie? He’s not an actor, and if he really wanted to direct for the first time, maybe he should have just concentrated on that, and not on his first time acting as well. The arrogance of this guy to think he can do them both for the very first time, and also make a big budget action movie, is ridiculous.

RZA’s character is simply named blacksmith, and he works in a Chinese village where the main activity is visiting the local brothel. RZA tells us a little history early on about the lion clan, which is fighting a war against the emperor. The guys in the lion clan all have haircuts that look like lion’s manes, and they all look pretty stupid. These guys look like cartoon characters. Apparently in the original idea for this film, every clan had an animal theme and looks to them. I am so thankful that at least that idea went out the window, and wonder if it was Eli Roth who convinced RZA to ditch that concept, when Roth came aboard the project.

There is some betrayal among the members of the lion clan, and the leader is killed by his two second in commands. That leader is named golden lion. The two who kill him are named Silver Lion and Bronze Lion. Not very creative, but then again, nothing in this movie really is. Silver lion is the main villain and he is headed to the village where the blacksmith works. That brothel is run by Madam Blossom (Lucy lieu, another Tarantino alumni, having been in Kill Bill.)

Before silver lion gets there with his clan, the brothel is visited by an Englishman named Jack Knife (played by Russell Crowe.) this guy walks in and immediately starts picking out women like Chris Tucker in Rush Hour 2. Only Jack Knife likes a girl who is with another man and when that man challenges him about it and threatens him, jack knife pulls out a cool knife weapon, sticks it in the man’s chest, and lets the weapon do the rest. It basically moves like a drill, up and down, and slices the guy up. This is a pretty cool moment, but there aren’t many more like this in the film.

A main problem with the movie is that nothing really happens until the Lion Clan arrives at the brothel. That’s at about the halfway point of the film. Until then it’s all just being introduced to characters and waiting. There isn’t even much action until that point. Then the clan shows up and attacks. There’s an action scene in the brothel, where the prostitutes turn out to be warriors with madam blossom as their leader. I like the scene where she walks around the brothel making a snapping sound with her fan and it is the signal to all of the girls to kill whoever they are with in bed.

In the second half of the film we get more of a story than in the first half, but it still isn’t anything great. The Lion Clan cuts off the blacksmith’s arms. Jack Knife comes along and saves The Blacksmith, who was ready to just die. Jack Knife takes him, nurses him back to health, and helps get the man’s arms rebuilt out of iron. Meanwhile, there’s a villain whose body turns into a kind of gold metal, and this is silver lion’s number one henchman.

The characters are definitely cool. Between the gold metal guys, the blacksmith, who now sports iron arms, and Jack Knife, if there’s anything this movie does right, it’s the characters. The other thing that’s pretty neat about the film is the colorfulness of the sets. At times this movie feels like we are watching a Zhang Yimou film (house of flying daggers, hero), and when it comes to colorful sets in ancient china, that’s about as big a compliment as you can get.

But the story is just so weak. Even coming down to three different fights at the end, where three different heroes each square off against three different villains, ends up being more annoying than cool. Big moments are meant to be felt on their own. By cutting back and forth between three action scenes, we are really just taken out of each one. The movie would have been served much better by spreading these scenes out a little and giving each one it’s own time in the course of the film. Between the sets and the characters, this could have been a cool movie, if only there was a better story to guide it along.