The Meaning of Life ** 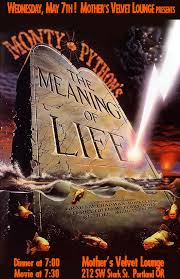 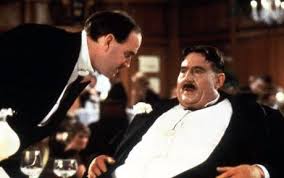 In a Kentucky Fried Movie / Movie 43 kind of way, this material is somewhat funny, but nothing all that memorable or special.

It’s witty at times, and there is some thought behind each unrelated sketch, but it’s not always easy to figure out exactly what that thought is. The movie is a series of short sketches or chapters, each one involving different characters, and telling a different story about life. The chapters include things like birth, childhood, and death. while some of the ideas are pretty funny, there are also plenty of them that fall flat. A common thread, which appears in at least three of the sketches, is the idea that something crazy is going on, and everybody around the person doesn’t notice and just goes on with their usual activity. This is somewhat funny at first, but when seen over and over again, spanning different sketches, it loses it’s charm. The same can be said about the movie, which has a much funnier and smarter first half than it does a second half.

Monty Python movies are interesting. They are basically the exact opposite of the American quick-witted comedies that were being made at the same time. In America, we had movies like Airplane, Top Secret, and Naked Gun. The movies of the Zucker brothers. Those movies are all about physical gags. The Monty Python movies, on the other hand are more about dialogue and strange circumstances.

The movie opens with something that they advertise as a short film, unrelated to the rest of the movie. It involves a stock company where the employees are old men, slaving away at type writers, while they’re employers, a bunch of young guys wearing suits, walk up and down the aisles yelling at these old men. We suddenly flash to a sort of poetic look at the whole thing, and it’s as if the old men at their typewriters are actually on a slave ship rowing away while the masters scream and whip them. Suddenly the old people revolt and the whole thing turns into a pirate parody with the old people turning a desk into a plank and having the young people walk onto it, and straight out the window. The poetic element and ideas were kind of fun, but the actual gags aren’t as funny as the movie seems to think they are.

That’s when the actual movie starts. The Meaning Of Life is divided up into chapters with subtitles telling us which segment of the movie it is. The film is also kind of narrated, or introduced by a group of fish with people faces on them. The fish are the ones who question what the whole movie is about and when it is actually going to start talking about the meaning of life.

The first skit or segment is about birth. It opens with a point of view shot from the perspective of the woman on a hospital bed, in labor, being rushed through the hallways of a hospital. She keeps slamming through the doors with her head smacking against them. When the woman gets into the delivery room, the doctors appear to have no idea what they are doing. They even lose the patient at one point, behind a bunch of machines. This humor is pretty one-noted. It’s okay, but it’s nothing great.

From birth, we move into a segment about childhood. The movie shows us two sets of parents. The first two parents are Catholics who do not believe in using protection and have a house full of children. When the father can’t afford to pay for his children, he tells them that he’s selling them off to be used for medical experiments. The children have some suggestions about other ideas the father can do, but he won’t hear it, and insists that it is medical experiments for the lot of them. After that, we move across the street to see the couple that does use protection, and how they rave about it and about martin Luther protesting against the church, and allowing people more freedom over their decisions. This is definitely not American humor. It’s trying to combine history, politics, and religion, and thinks it is very smart. The truth is it is just okay.

That’s pretty much the story of the film. Most jokes don’t work and are goofier than they are funny, but occasionally something clever does come up. In that way, this movie is very much like Kentucky Fried Movie, (also made around the same time), a series of short, unrelated gags that try to be extreme in order to get laughs. The best joke here, in Monty Python’s Meaning Of Life, involves a man who is going to be executed but has given the option to choose how he would like to die. Suddenly we see the result of his choice, as about fifty topless girls go chasing him around on a beach armed with weapons. So he chose to be hunted by a bunch of hot, topless women. Funny stuff.

Unfortunately, much more of the movie does not work than the amount of jokes that actually do. There is one long sketch, in the second half of the film that involves a fat guy who just keeps eating. Now this guy is not ordinary fat, but more like a giant balloon. The sketch becomes extremely gross when the man starts puking everywhere. It is crazy puke that comes out of him like water bursting through a pipe, and the running joke of the sketch is that for the longest time, nobody seems to notice. The waiter goes on pointing out the specials to him, while the man is puking all over the waiter. It’s a strange sketch, and feels out of place in this movie.

The problem is that the joke is not out place. it represents the new tone of the film that embodies the second half. Suddenly the movie has gone into gross out mode, not trying to be smart and witty anymore, but going for a different kind of humor. Another sketch that happens during this portion of the film involves two men who are trying to get people to donate kidneys to their cause. These men act like door-to-door salesman, ringing doorbells, and the joke comes when a man does not want to sell his kidney. The two workers now attack him, cut his chest, and dig into it in order to take out the kidney themselves. It’s a very bloody scene, and once again the joke is that other people, such as the woman who is also in the house, don’t notice what’s going on.

With jokes like that or the fat guy at the restaurant coming in the second half, whatever smart humor this movie had going on in the first half is quickly shoved out the window, like the guy on the plank. Speaking of that sketch, I do like the way it comes back later on in the film and this time we see it from the businessmen’s point of view who are working in a nearby building when the old men building shows up, like a pirate ship, moves into place, and attacks.

It’s probably about fifty-fifty with regards to how many jokes work and how many don’t work. There’s another good one early on where a professor is trying to teach his students about sex end and brings his wife in to have sex right in front of the students in order to explain certain things to them. Once again, the joke is that none of them thinks this is strange. The movie uses that situation too often, for too many different sketches, and might have been funnier if instead, people really did have horrid reactions. Then their reactions might have been funny. Plenty of movies do a thing where one guy notices and can’t believe nobody else does around him. This movie doesn’t even go for that angle. It is a very strange film (another sketch later on is like a drug trip with a weird man dress liked an elephant and another guy with long bendable arms,) and some of the jokes work, but many more of them don’t. The big problem is that even the jokes which work is still only moderately funny.