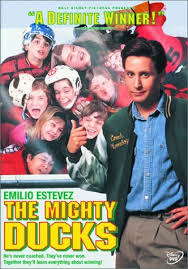 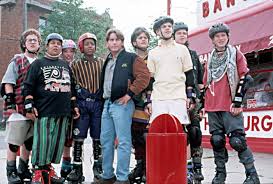 An entertaining and fun movie about a kids hockey team, where the humor is often corny, and the characters cliched, but the story is loaded up enough with ideas to actually work.

This is a movie about a disgraced lawyer who is thrown into the role of being the coach of a kids hockey team. That laywer is Gordon Bombay (Emilio Estevez), and he might be annoying as a lawyer, but as a coach, he knows what he’s doing. That’s because he used to be a hockey star when he was younger and he knows all of the tricks. The movie definitely gets ridiculous at times (the enemy coach is very cliched), but if you suspend reality and just go with it, it’s still kind of fun. The kids are just okay, but watching the ways gordon deals with them really works and it’s the force that drives the entire movie.

Despite all this, The Mighty Ducks was absolutely one of the best of these movies. In fact, other than the sandlot, it probably was the best. Credit that to Emilio Estevez, who fit the part perfectly, as a guy who wasn’t going to get too emotional about anything, but who could convincingly fit into this world to coach these kids. The movie puts Estevez’s character, Gordon Bombay (what a name, definitely memorable), in a number of different roles…lawyer, coach, lover. The only one of these that he’s actually good at is the role of coach. Luckily that’s the one that most of the movie is about.

At the start of the movie, Bombay is a lawyer. He is arrogant and wins a case by showing off how bad the opposing lawyer is. For Bombay, this whole thing is a game, making the judge and other lawyer wait, while he pretends to be talking to his client. Bombay walks away from the case celebrating how great he is, only to be brought back down to reality by his boss, Mr. Ducksworth, who tells Gordon he never wants him to try that stunt in a courtroom again. Shouldn’t the boss be happy that his lawyer won the case?

After a night out drinking and driving, Gordon is arrested and sentences to community service. His boss talks to the judge and gets it so that the community service is that Gordon will coach the company peewee hockey team. He will also be given a leave of absence from the law firm. Gordon unwillingly accepts the job and heads to the frozen lake where these kids play. He drives his limo out onto the lake, in one incredibly stupid move.

At this point, the movie seems to be going nowhere fast. Luckily it picks up once we meet the kids. Like I said, Estevez playing the lawyer part is terrible, so the first segment of the movie that leads him into becoming coach is lousy. But it gets better once we meet the kids. It’s not that the kids are so good; it’s the way that Gordon relates to them. He fits the role of their coach very well. Aside from that limo on the ice stunt, (he says he knows the ice very well, and that might be true, but is he an expert on how much a limo weighs? how about a limo packed with kids?), he does a nice job being a role model for these guys.

It helps that Gordon used to be a hockey star himself. He used to play in the peewee leagues for a team called the hawks, and wouldn’t you know it, the guy who used to coach him is still the coach of the hawks. This coach is coach Reilly (played by lane smith, the opposing lawyer from my cousin vinyl.) he is a walking cliché in this movie, being one of those terrible people who tells kids to go out and injury other kids in the interest of winning (just like the sensei of the cobra kais in the karate kid movie, only not half as convincing.)

Gordon and this coach have some history that is shown in flashbacks a number of times throughout the film. It’s really all about one shot. Gordon was the star player on the hawks, and it was the finals. The entire game came down to a penalty shot that Gordon was taking. And right before he went out on the ice, his coach had a few words for him, telling him, “if you miss this shot, you’re not only letting me down, you’re letting your whole team down.” real nice. Aside from that, the coach mentions Gordon’s dead father, and when his father would have wanted to see. And then Gordon misses the shot and falls to the ice.

Most of the movie is about Gordon training his group of kids. He does fun drills with them, such as sliding eggs across the ice, telling them not to stop the egg with their hockey stick, but just to accept it. Of course, many of the eggs break. Another thing he does is have the kids take roller skates around a mall to get the hang of skating. He even recruits a kid of the street who has an amazing slapshot, but not control of his feet on the ice.

There is a major point of the film that happens in the middle of the movie, and is both the best and the worst moment of the movie. it’s when Gordon realizes that the star player of the hawks should really be playing for his team, based on where the kid lives, and makes a case out of it. it’s a very cool moment, and totally unexpected, because Gordon is kind of being a jerk here. if the kid trained with that other team all season, then let him finish out the season with his team, and make him play for your team next season. only Gordon pushes and gets the kid. but then he risks his job over it and even accepts losing his job. this is getting ridiculous. and, even after he is fired, he is still the coach of the hockey team. does that make any sense? It is the company hockey team. Wouldn’t he lose that job too?

There are moments like this, which straddle the line of the both cool and ridiculous. Another one comes when the kids overhear him talking sarcastically to the other coach about how bad his kids are, and they believe what they heard him say, including, “they don’t even deserve to live.” The movie finds little conflicts like that every so often, and aside from everything else, also makes time for a romance subplot between Gordon and the mom of one of the kids. There’s a lot going on in this movie, and that’s a major reason for why it stays interesting at all times. The humor is often corny and unfunny, and the life lessons are straight out of patch Adams or any other clichéd, simple-minded film, but even still, the movie is kind of dopey fun. The reason for that, more than any other, is Emilio Estevez, who carries the movie on his shoulders and does a pretty convincing job in his role.