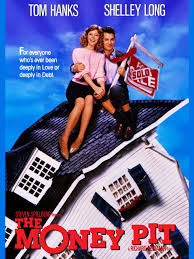 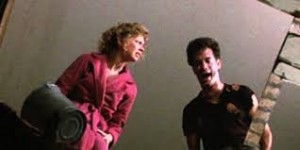 A very funny movie about a crazy situation that unfortunately ends up being too long in the end as a new problem arises out of nowhere.

This is a very entertaining and humourous movie. it is loaded up with physical gags as a couple thinks they are getting the steal of a lifetime when they buy a giant house at a tiny price. Then they move in and everything goes to hell one step at a time. The place falls apart in every way imaginable. watching this happen all around the couple, and the slow build up to bigger and bigger problems, is a lot of fun. Tom Hanks, in particular, is terrific here, doing lots of physical stunts and also really getting laughs with his reactions. The storyline is solid, but as it goes on, it feels the need to add something new, and what it adds is really just the usual romantic comedy angle. This movie would have benefited from sticking to it’s one gag and at least staying it’s own thing. Still, for all of the great physical humor, the movie ends up being a lot of fun.

The Money Pit is a pretty funny movie. There’s certainly a cool premise at hand here, and the two stars get as much out of it as they can. It’s basically the story of a couple that buys a house and moves in, only to learn that everything in the house is falling apart. With different actors, this might not have been such an easy sell. Imagine Dustin Hoffman trying to do the physical things and get the humor those tom hanks does in this film. The movie works because of how simple the story is and also because of its two lead actors.

At the start of the film, we are with Walter (Hanks) and Anna (Shelly long), waking up one morning in their luxurious bedroom. Walter mentions proposing to her and that tells us right away that these two are not a married couple, but they live together. That’s when a short man bursts into the room and starts barking orders. Walter shoots out of bed and demands to know whom the man is, only to find himself getting no answers.

It turns out the house belongs to a famous symphony orchestra conductor, who runs the orchestra that Anna plays in, and that he has been away in Europe for a number of years. Anna has moved into the house while he was away, but now the man is back and wants his house back immediately. I love the way we can put ourselves in Walter’s shoes in this scene, lying in bed, waking up in the morning, nice and close and intimate, and then having a stranger burst through the door. It’s a very smart and funny opening.

With the conductor, max, back in town, Walter and Anna have to find a new place. Max has a thing for Anna and insists that she forget about Walter and move in with him, but Anna loves Walter and let’s max knows. Now she and Walter go about looking for a new place. This part of the movie could have been longer. We could have seen them look at a number of places, meet numerous quirky and strange homeowners, and take their time before finding the house that they settle into.

This is only important, (that the movie could have tried that), because the premise that the movie works with isn’t enough to cover the entire length of the film, and so, knowing that, the movie has to invent a new problem in the second half that feels a little forced. Still, everything in the first half works, and that includes the two of them coming upon this mansion, loving everything about it and closing on the house.

It’s when they wake up in the morning the next day that the problems start. One after another, everything starts falling apart. At first its small things like a loose stair or some plaster from the ceiling that falls down when Walter hammers in a board onto one of those stairs. But the problems quickly get worse. Soon entire walls and doors are falling down. Walter and Anna find themselves running around the house just to keep everything standing up.

As the problems with the house start to build up, the movie becomes incredibly physical with lots of gags happening to Walter. The first of these is when he goes into the kitchen, tries to turn on the lights, and suddenly the wire and electric circuits that run throughout the walls start burning up like the line that leads to a stick of dynamite. Soon things in the kitchen are bursting open and the whole thing look like a giant domino trap situation where one thing hits another and causes something else to happen.

There are many more of these gags that follow. One of them has Walter falling through the floor on a carpet that takes him into a hole. He ends up plummeting down like he’s in quicksand and can’t get himself out. Another gag has all kinds of things fall down, onto the board Walter is standing on, sending him flying up through the air. And then of course there’s the great staircase scene where as Walter goes running up the stairs, the whole thing breaks apart and falls down under his feet. All of this reminds me of the great Chaplin / Keaton silent movies, and specifically of the Chaplin movie The Gold Rush. It’s a great deal of fun here in this movie.

But then the movie reaches that inevitable part that all romantic comedies seem to have where the couple needs to have a major fight at the end. It’s so big that there is the threat of these two losing each other. Something to be a climax of the movie and give us one last thrilling push as they try to stay together. I wish the new problem could have been more original, because it is by far the weakest part of the film. This movie seemed more like a slapstick comedy than a romantic comedy, but it seems to want it all, and definitely made a mistake with this ending.

Other than the ending fight, which feels tacked on, the movie is pretty good. If not for that end fight, then maybe the movie would have felt like it only had one joke, and was not multi-dimensional, but so what? It was handling that one joke and original premise very well, and if the alternative is to just transform and looks like every other movie in the world, then I’d stick with having only one running joke. The movie certainly handled that gag well, by slowly building up to the extremes of the house breaking apart, one small thing at a time. It’s a good movie that could have used a tighter ending.