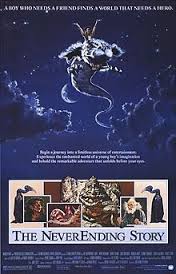 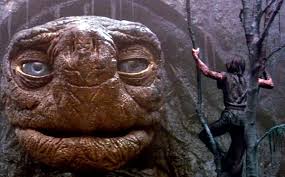 A creative movie that straddles the line between being a great fantasy movie for kids, without quite being good enough for adults.

The Neverending Story is a movie about a boy who comes across a book, sits down to read it, and gets hooked on the adventure that’s taking place on the pages in front of him. There have been plenty of movies that are bookmarked at the beginning and end by a character telling the story, and the whole in between is going back in time to watch the story actually happen. Movies like the princess bride and Edward Scissorhands are some examples. But The Neverending Story is different. It constantly goes back to the boy, Bastian, sitting in a deserted room, reading the book. Bastian reacts to the things happening in the book as if he’s watching a 3d movie, often screaming in terror or yelling out the story character’s name. It’s a little silly, but it’s also a little fun.

The first part of the movie is all about Bastian finding the book. He has a tough home life where his mother has passed away and his father discourages him from using his imagination. “You have to keep your feet on the ground,” his father tells him. Bastian is doing poorly in school and neighborhood bullies on the street pick him on. Nothing seems to be working out for this kid. And one day he runs away from the bullies and right into an old bookshop where he ducks inside to hide.

That’s when he comes across a mysterious old man reading a book. The old man tells Bastian that the books Bastian reads are safe. He can enjoy the adventures and then put them down whenever he wants. This book, however, is different. He tells Bastian that this book is not for him. It’s a lot of fun watching the way the old man uses reverse psychology to make Bastian all the more interested in reading the book. And when Bastian does grab the book and runs out of the store, the movie shows us the old man smiling. This is exactly what he was hoping for.

Bastian runs into the school, sees that he is late to class, and decides to go into a large, abandoned storage room instead. This is where he sits down to read the book. He opens it, begins reading and so starts the adventure. The book chronicles the tale of Atreyu, who is a boy, just a little older than Bastian. The magical land of Fantasia is in trouble. The nothingness is coming and it’s destroying everything in its path. Ferocious lightning strikes and rocks crash to the ground. Unless something is done to stop the nothingness, all of fantasia will be destroyed.

Atreyu is sent out to find a way to stop the nothingness. Of course, he really doesn’t have a clue what he’s doing, and just goes off to meet one interesting character or creature after another. The best thing about the movie is the makeup and creative creatures that populate this Fantasia. It’s alike and wonderland crossed with star wars. When we first arrive in Fantasia, we meet a guy who looks like the mad hatter, a bat who carries the man around like a hang glider, another guy who looks like a goblin, a racing snail, and a giant rock creature who is not only made of rocks but also eats them.

The movie would have been wise to spread all of these creatures out a little instead of hitting us with the whole bunch of them all at once. Maybe they were trying to do something like what star wars did when Luke Skywalker showed up at the canteen and found himself surrounded by strange aliens. But here, in The Neverending Story, the scene is just the rock creature talking to these other guys, and none of it has to do with atreyu. In a movie that already has two different main characters, (Bastian and Atreyu), there shouldn’t be a lengthy scene early on that doesn’t really feature or deal with either one of them.

The other reason why this early scene is not great is because it basically shows us all its cards right away. There’s something to the idea of holding back and slowly revealing things to an audience. It’s the strategy that good monster movies apply all the time. You only start to see the monster in full as the movie gets toward its end. The Neverending Story doesn’t believe in that idea.

Atreyu goes on his mission and comes across all kinds of weird creatures. There’s the giant turtle whose sneezes nearly blow him away and there’s the elf like old man who gives him advice for getting past the sphinx. The sphinx is a giant statue that shoots lasers out of its eyes. There’s also a kind of panther-bear who hides in a cave and then the giant whitish-pink dog who flies around and carries atreyu from place to place. All of this is fun.

The creatures are great. What is not great is the lack of a clear enemy or conflict. When the enemy is the nothingness, it is basically a giant storm. And who controls it? There is no real force of evil here and that’s a problem. When I was younger, I remember participating in an adventure course at camp with all kinds of cool things to climb under and jump over. I remember at one point there was a rope where you had to swing over a pit and I asked the counselor what was supposed to be in the pit. I was hoping for an answer like lava or deadly snakes. When he replied, “poison peanut butter,” I was disappointed. This is silly, I thought. It’s kind of the same thing with The Neverending Story. Between the swamp of sadness and the storm of the nothing, the threatening ideas here are more silly than thrilling.

Another problem is the lack of any real violence. This movie disguises itself as a fantasy movie for kids, but even the chronicles of Narnia films were packed with way more violence then this. I suppose the movie is a product of its time and in the eighties, a film could get away with disguising itself behind strange creatures and pretending that it had violence when really it didn’t. Watching atreyu run through a pass while lasers shoot at him is not the same as watching him in a fight to the death. But with no real enemies in this movie there is no one to fight. And I suppose for kids, that’s okay. This is a great kid’s movie with some wonderful creativity, but for adults, there is clearly something missing.