The Panic In Needle Park ** 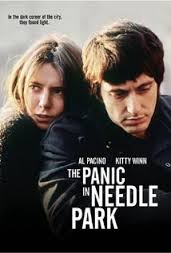 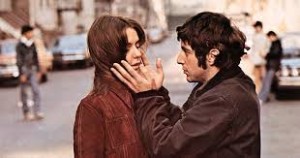 An interesting, but often depressing movie about a heroin-addicted couple and what they go through.

The Panic In Needle Park is a movie about heroin and the people who used to push it back in the seventies. The movie is about New York, back at a time when it was at it’s grittiest and about the way these junkies found a place for themselves there and a way of life. It’s also only the second movie of al pacing’s career and the movie that preceded his breakout role in the godfather, which came out the very next year. Perhaps this movie helped to get pacing that role, and therefore really launched his acting career more than any other film. He certainly delivers the kind of powerhouse performance here, where you can see how that might have happened.

The movie starts with a girl named Helen riding the New York City subway and getting sick. There is no music here at the start of the film, only subway and people sounds as we get close-ups on what she is seeing. It puts us right into the movie, into the heart of New York at this time.

Then we meet pacing’s character, bobby, going to visit his friend, Marco. And Helen is there, at Marco’s place, in bed on the floor, all curled up. Bobby speaks to Helen a little bit and they kind of hit it off. Helen’s sickness gets even worse and she ends up in the hospital. That’s where bobby gets his chance. He comes to visit Helen, sneaking past the nurses and security, making up stories for who he is, and making Helen laugh.

Once she gets released, they begin a relationship. He introduces her to his way of life, including all of the people he associates with as well as the scams he pulls on a daily basis. While they are just walking down the street together, for example, he passes a truck, which looks like it wasn’t locked. He doubles back to the truck, opens the back door, grabs a television set out, and continues on his way. Then he takes Helen to a store where he sells the TV set, by first negotiating and swindling for a better price. This is bobby’s world.

It takes a while before Helen gets involved in the drugs that bobby does, and that’s a good thing. The movie becomes about the corruption of Helen. She starts off as a nice, sweet, innocent girl. And for a while with bobby, she stays that way. She maintains her innocence while just watching him pull the scams. But then one day she decides to give heroin a try and from their, their’s no turning back.

Bobby and Helen become junkies together, shooting up whenever they have a chance, and doing whatever they can for money. When bobby ends up going to jail, Helen is left on her own and she turns to prostitution. It’s not all that surprising because the people they hang out with are all pretty much doing the same thing. In fact, in one scene, they are at a friend’s place hanging out with the friend’s baby, when the woman has a customer come over. Helen and bobby hide in the bathroom with the baby while the woman has sex in the next room with her client. This scene showed us everything up until the sex and then it cut away. Considering it was the seventies, and movies that this time were trying to show as much depravity as possible, I think they should have given us a moment or two of bobby and Helen in the bathroom, holding the baby, while listening to the sounds in the next room.

Helen becomes a mess. She gets to a point where she is sleeping with anyone, for either money or heroin. In one scene, she sleeps with a kid who looks like he is still in high school. Bobby has been released from prison at this point, and he busts in on the kid, tells him that Helen is his wife, and then takes the kids money from his wallet, before throwing him out of the apartment. It’s all part of a scam. Bobby had no problem with the kid sleeping with Helen, and knew that it was happening before it did, but this way he gets the money from the kid’s wallet.

Another situation that comes up involves Helen’s mom calling her and telling her that there are some friends of hers coming to town. She wants Helen to see them. These are mother’s friends who probably knew Helen when she was a girl and will report to Helen’s mother how her daughter is doing. Helen doesn’t want to go. Bobby convinces her, because he thinks there is money in it. He thinks Helen can ask them for money and they’ll give it to her. Like the prostitute-bathroom scene, this premise ends up anti-climactic with Helen not even going to the meeting, but the setup of it all was a lot of fun. We watched Helen talk with bobby about it, agree to partake in the idea, and even try to get herself cleaned up in the mirror so that her mother’s friends would never know she was a heroin addict.

The movie is good, but it is far from great. For one thing, there are way too many scenes that are developed nicely, but end in anti-climactic ways. And those ways are major let downs, where the moment that the movie is building up to doesn’t even come and just not deliver, but actually never comes at all. Aside from that, unlike some of the greatest heroin addict movies of all time, like train spotting; there is no humor here. There is no joy.

Trainspotting did something that few other movies ever do, which is that it showed you the point of view of the junkies, leading up to an explanation of why they did it. The Panic In Needle Park never does that. Instead it makes everything look dark and depressing. I’m sure this is a product of the time when the movie was made, where everything in New York really was gritty and dark, but there has to be a reason why the addicts are doing it in the first place, and panic never really gets into that. It never gets into what’s so great about the drugs. As a cautionary tale, it works. And it certainly keeps you interested the whole way through, but it could have been better and more captivating.