The Perks of Being A Wallflower *** 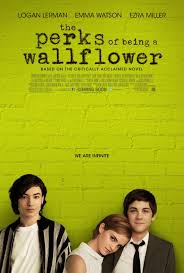 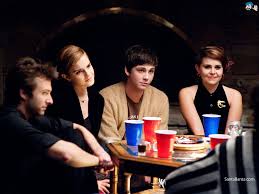 An enjoyable movie that doesn’t seem to have any conflict in the first half, but really makes up for it with a packed and loaded up second half.

This is a coming of age story that might have the same basic ideas as other films that came before it, but certainly finds interesting ways to veer off the usual path. On the surface this movie is about a kid who comes to a new school, doesn’t know anyone, and has to find a way to fit in. but the storyline quickly nips that clichéd trajectory in the bud, by having our protagonist, Charlie, get welcomed in by a group of outcast friends. The conflict and fun does not really get started until the second half, when problem after problem seem to pile up on top of each other. Before that, everything is just setup. The structure works here, because the lack of conflict in the first half ends up just making us appreciate the second half even more.

The Perks Of Being A Wallflower are a somewhat unusual movie. Instead of going the clichéd way and having the usual kinds of teenage movie conflicts, this film decides to bypass all of that and just have no conflict at all. In the first half, that is. Instead, that half of the movie is all setup. It is about a boy named Charlie who comes to a new school and has a hard time fitting in.

That generally storyline isn’t exactly foreign or original, or in any way creative, but this movie quickly gets off that track of the loner who can’t make any friends, and has Charlie find a group of outcasts who all hang out together and gladly accept him into their tribe. Charlie is a freshman, and the characters who welcome him in are all seniors. The two main kids in the group are Patrick (Ezra Miller) and Sam (Emma Watson), a brother and sister team that puts humor ahead of everything else.

Patrick is called “nothing,” by everyone as a silly nickname that was given to him by a teacher in woodshop class. We get to see the scene where he is given the name, and in fact, it is our introduction to the Patrick character, as he mouths off to the teacher, thinks he is funny, and is put in his place. Then it’s at a football game where Charlie goes by himself to be a part of the school community that he and Patrick hit it off. That night ends with Charlie going out with Patrick and his friends to the local diner, officially being accepted in.

At this point we are about a third of the way into the movie. The next third is spent just socializing, with Charlie going to parties to trying drugs for the first time, and things like that. When Charlie is high, he is incredibly honest and open about what he thinks of things, and the other kids at a party gather around him to listen to what he has to say.

All of this is fine, but it leaves us wanting something to happen. Some sort of a conflict. One might say the conflict was about Charlie fitting in and feeling accepted, but that got resolved pretty quickly. I’m glad the movie wasn’t about that, because by avoiding that storyline, it avoided a very common path that movies travel on. But there needed to be something to replace it, and it took a while for us to see what exactly the movie had in store for us. As it happens, this film had a plan under its sleeve and was keeping its cards hidden away until just the right moment.

That plan involves a girl in the group who Charlie starts dating. He dates her because it seems like the right thing to do for his social status. This girl is super popular in the group, and Charlie considers all of these kids his close friends. He doesn’t want to do anything to upset the balance of what he has developed with them, and so when this girl shows interest in him, Charlie happily accepts her offer.

But then something happens. Charlie starts to realize that he has feelings for Sam. Ever since he met her, he had a crush on her, but that’s only coming into focus now. He probably always knew he liked her; only she had a boyfriend, so he never thought about asking her out. Well, she still has a boyfriend; only being with this other girl makes Charlie realize how much he would rather be with Sam.

It’s at a party one night when this all comes out. Suddenly the movie goes from kind of dull to red-hot. The group of friends is sitting around a truth or dare kind of game and Charlie accepts a truth question. The question asks him about his relationship with this girl. He thinks about being honest and telling how awful it is, but he doesn’t. Good job. Only Charlie can’t keep that up for very long, and when a dare question asks him to kiss the prettiest girl in the room, he kisses the wrong girl.

All of a sudden the whole group is upset with Charlie. They completely turn their backs on him to the point where they don’t even consider him a friend anymore. Charlie calls people in the group up and tries to stop them in the halls; only they want nothing to do with. Then there’s a climactic scene where Charlie has to do something and kind of prove himself, and the whole thing is completely unexpected.

As if that wasn’t enough, there’s a twist ending involving flashbacks and a story that we have only vaguely been hearing about throughout the film. This is the story of Charlie’s aunt, who it seems like he was so close to before she died in a horrible car accident. We know there’s a secret here, like maybe the reason why Charlie feels responsible, but the truth is pretty intense and shocking. This movie definitely has a slow-moving first half but it more than makes up for it with everything that is yet to come. Compared to other movies about young people in school making new friends, such as the awful film Kill Your Darlings, this one is pretty good. It’s certainly different, and that goes a long way.