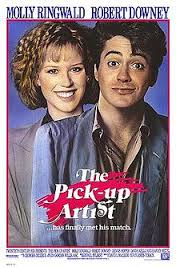 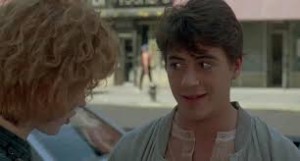 A pretty average, and often kind-of dopey romantic comedy, this one is about a guy trying to save the girl he likes from some loan-sharks.

The Pick Up artist is a pretty lousy, throwaway eighties movie. It’s a film that is meant for the teen-obsessed pop culture at the time, which is ready to buy anything from the actors of John Hughes movies. Molly Ringwald is the featured star here, and Robert Downey Jr. is the man who has her attention. Both actors are just phoning it in with a lousy script and a movie that has nothing original to offer. For Downey this movie came out the same year he made Less Than Zero, about a drug addict, and what a difference in every way that film was. With that one, he was actually taking a risk and trying something. With this one, he was playing it safe.

The movie opens with Jack (Downey) trying out pick-up lines in a mirror. This is pretty lame. We’ve seen things just like this before, so many times. Then the movie goes on to show him trying to pick up girls in the street and it starts to get a little better. Especially when one of these tactics actually works. Jack pays the girl a few compliments and then high-tails it out of there leaving the expecting more. She calls after him wanting to know what gives.

That night, at a club, we meet a loan shark, Alonzo (Harvey Keitel.) There’s a pretty interesting dynamic in the club between him and Randy (Ringwald.) This loan shark wants Randy to get with his friend, and she has no interest. Yet, Alonzo seems to have some kind of a pull on Randy, where she can’t just walk away. This is one of the more interesting scenes of the movie, simply because it makes us curious and wanting to know more.

The next day, Jack is still at it trying to get girls and he ends up spotting Randy and getting her. The two of them go for a drive to central park and have sex in his car. Then she wants nothing to do with him afterwards. She was just using him.

Jack becomes obsessed. At first, it seems like, why? He already got what he wanted. Then it starts to dawn on us; she is the only one who gave him any kind of attention. This becomes a little weird with him stalking her, getting a bunch of kids to take her tour at museum, and then following her home to Coney Island.

The loan shark shows up in her apartment. Her dad owes him money, and Alonzo is not taking no for an answer. That’s when Jack steps out and makes it his problem, saying he can get the money. He is clearly setting himself up for trouble, sticking his head where it doesn’t belong, but he’s interested in Randy and this seems to be his only chance.

Randy’s father is a guy named Flash, (Dennis Hopper) who Jack is convinced is her boyfriend. If this movie had them try different ideas and ways of getting the money, could have been interesting. Maybe Jack could have asked his grandmother for ideas. Instead, Randy goes to Atlantic City and he goes to his friend, Danny Aiello. Jack tells Aiello she lives with her older boyfriend, how can Aiello let him get this money for her? He goes with Jack.

The Atlantic City scenes are lousy. Loan shark shows up right there as if he were around the corner. Jack sits down and puts all his money on the table, Rounders style, only here, it feels incredibly predictable. There is nothing going on this movie that is worthy of attention. It’s just a routine, throw away film.