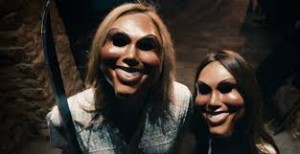 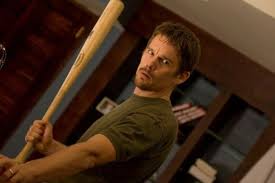 Far better than expected, this is a pretty cool movie that has great ideas, a few problems, and an especially thrilling final final act.

This is a movie based on a very creative premise about a future society where for one night a year it is legal to kill people. we get the story of a security specialist and his family who become the target of a group of these killers. the movie is smart enough to give us smaller stories to work with as well, such as a teenage romance turned horribly wrong and some jealousy with the neighbors. the movie does have some missteps, such as spending way too long looking for a single guy in the house when there’s tons of other enemies right outside. there are also way too many scenes where a character is shot at the last second by someone who appears from off screen, and who we didn’t even know was there. despite these flaws, this movie is handled pretty nicely and definitely builds up to something cool in it’s final third.

The Purge is a pretty cool movie. Just the initial idea alone is terrific. One night a year, America has declared it legal to kill people. The reason why is because people need to purge themselves and get all of their anger out so that the rest of the year there can be no violence. And apparently it works. The violence is down to almost zero. Except, of course, on this one night. It’s kind of like declaring a holiday of murder. This movie plays on the one night idea just like other horror films like Halloween, trick r’ treat, or even scream.

With this futuristic time frame and state of affairs as the setup, we are given a protagonist who is benefitting from the national holiday more than anyone. This is James Sandin, (Ethan Hawke) a security specialist in charge of installing high-tech security systems into people’s homes. You would think this guy would be more prepared and capable of defending his home than anyone. That’s the point.

the movie takes its time getting to the purge and that happens to be a very good thing. it’s not as if we watch the characters starting with a week earlier or anything, but instead, the film starts us off about an hour or two before the big event. during that time, chracter do their final preparations along the street. neighbors come by and see each other and talk. outside the sandin house, we see jame’s wife, mary (lena headey) accepting baked goods from the neighbors and hearing about what they think of her. the gossip is that the new extensions she and her husband have made to their house were paid for by the people in the neighborhood themselves, who all recently purchased new and expensive security systems from sandin.

inside the house there are interesting things going on as well. there are two children, charlie and zoey. while charlie messes around with his favorite hiding spot and toy robot, we get a love story between zoey and her much older boyfriend, henry. apparently their relationship is a problem for james, since his daughter is much younger than henry. zoey tells her eighteen year old boyfriend not to worry about her father, and that he doesn’t need to know the two of them are still seeing each other.

while we are watching all of this and meeting the characters (not just the family, but also all of their neighbors), there is a countdown going on. when things have settled down, the family sits in front of a tv to watch the announcement that the purge is beginning. james puts his house on lockdown, which means that giant steel doors come down over every entrance, including windows. then the kids go off to do their own things around the house.

at this point, zoey discovers that her boyfriend, henry, is still there. henry has stayed around to have a conversation with james. he is going to set zoey’s father straight about their relationship once and for all. meanwhile, charlie has an interesting discovery of his own. he sees a man on the street calling for help, bleeding profusely, and claiming that people are coming after him. charlie does the unthinkable and disables the security system to let this man in.

there’s a really cool moment when the man first gets in and just as james is coming around the corner, seeing this guy and about to react, henry shows up on the stairs, ready to enact his plan. he isn’t really here to talk to james, but to use the purge as a way of getting what he wants. we get a gunfight and a bunch of unaswered questions which add to the suspense. the homeless man, who charlie has let in, runs aways and disappears into the house somewhere.

now we meet the real enemies. it’s a group of college age kids who are wearing masks, carrying weapons, and are the ones who are hunting the homeless man. they ring the bell of the sandin’s and tell james through the intercom that he has something which belongs to them. the whole thing feels a little like judgement night, but that’s okay. in this film, the villains are trapped outside, but they have help coming which can easily take out the security system. the leader of the pack explains to sandin that they don’t want him and his family, but only the homeless man they are chasing, and that he needs to turn this man over to them, alive.

now the movie starts to get weak. that’s because there is a good amount of time before these kids actually do get in, and all that happens during that time is the sandin’s go looking around the house for the homeless man. we don’t really care about him. we care about the kids outside who are wearing the horrifying masks and ready to cause trouble. way too much time is spent looking for this guy throughout the house. it isn’t until those kids outside do get in that the movie starts to pick up again.

at that point we get some very cool action scenes. we also get a hell of a twist involving some unexpected killers at the end. all of this is great. there’s only one problem with the action. the movie gives us the same scene over and over again. four times. it’s that cliched scene you see in all movies where one character is about to kill another and then a bullet wrips through his chest and we see that the bullet came from the gun of a character off screen, who we never knew was in the same room. the first time we get that scene, when james saves his son, it’s pretty awesome. but then we get it three more times. that is way too much. we start to come to expect it, and that’s exactly the opposite of a scene like that. still between the initial idea, the cool looking bad guys outside, and the crazy ending that introduces some unexpected killers, this is a hell of a movie.