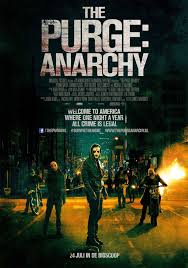 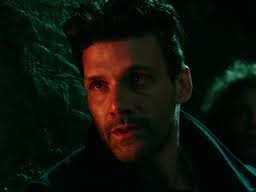 Slightly better than the original film, this one expands on the world created in the movie and opens the doors up to tons of creative ideas.

A very cool movie, this sequel to The Purge takes the story to a whole new place and situation. If the first film simply established the holiday and rules and showed us what it was like for families in the suburbs, then this sequel takes it to the streets. It’s all about a hunt and chase through the city, as we follow three sets of characters who join together as a group. All of this would have been enough, but the movie just uses those components as building blocks to get things started. It has a whole bunch of tricks up its sleeve, including changing the location from the streets to an apartment to an auction and obstacle course hunt. There’s even a cool idea about the government and how they are using the purge as well. This movie is loaded up with creativity and despite some minor flaws, for the most part, it works.

The Purge: Anarchy is a pretty cool movie. It’s more suspense and action then horror, but that’s fine by me. In fact, this is the kind of “horror,” series that actually gets more creative and builds on the ideas as it goes on. Most horror franchises have a clever first film and then spend all of the other sequels just copying the original idea. That was the case with Insidious, a modern example of a cool first movie that really burned out with the sequel. The Purge is a series that finds ways to expand on its initial premise, and as a result, it really works.

The original idea behind the first movie was that there is this holiday, one day a year, called The Purge, where killing is legal. People go out into the streets and get their fix by killing whoever they please. If you want no part of it, then you stay in your house behind locked doors. The first movie was all about the suburbs and characters who had concealed themselves to their home for the night. The protagonist was a home alarm system specialist. For this second movie, the world opens up to what’s going on in the streets.

The movie starts out two hours before commencement. The first movie did something similar. Using the countdown is a pretty cool way to get us excited about what’s coming. And we get to meet the characters in their daily lives, long before they are running to survive. We meet Eva Sanchez, a waitress at a diner, who is leaving her job for the night. Everyone is closing up shop and wishing each other to keep safe. Eva has a walk home through the streets that has her pass by people selling weapons. When she gets home to her apartment complex, we meet her daughter, Cali, and her father. The daughter is rebellious and follows an underground organization, led by Carmelo Johns, that is anti-purge and makes public announcements criticizing the holiday.

We also meet a married couple that is in their car driving home, partaking in a disagreement. At first it’s not clear what they are arguing about. The idea is that she wants to tell his sister something and he says that once you tell someone, it becomes irreversible. It seems like they are talking about having a baby, like he wants them to consider getting an abortion, but once they tell the sister that she is pregnant, it’s a done deal, and they are keeping it. Turns out they are actually talking about separating and divorce. It’s clearly intentional, the way the movie hides the subject of their conversation in our first meeting with them, and only learn the truth on our second check in. I suppose the purpose is to make us curious and want to know more. This couple has a problem much bigger than what they are arguing about. With less than an hour until commencement, their car breaks down, and they are forced to leave it behind and go running on foot.

The third story is about a guy named Seargent (Frank Grillo), who is strapping up and getting his bullet proof vest and weapons ready for the night. This guy is willingly going out there to purge. He has a visitor to his apartment, right before leaving, and it’s an ex-girlfriend or ex-wife. She wants him to stay in for the night. He tells her to go back to her new family. This whole thing is a litle unrealistic. Unless they live in the same apartment building, would she really be popping in like this. Either way, it’s quick, and establishes that they are separated, and that something caused a rift between them. Seargent doesn’t pay her much mind, and as soon as she leavees, he gets into his bullet proof car and drives off, ready to hit the streets.

Most of our time, in the first half of the movie or so, is spent with the mother and daugther. Eva and Cali are certainly the most interesting of the bunch, especially with Eva’s father, who willingly sells himself to a wealthy family for them to kill him as part of their purge. This man is sick and dying and his family is very poor. He feels that getting them this money and releasing them from the burden of taking care of him is the best thing that he can do. He sneaks out of the house and gets into a limousine that is waiting outside, and it’s kind of cool, because we don’t know what it means at the time, but know he’s up to something.

And then the purge begins. Eva and Cali are taking it easy, making dinner, and when they go to check on Eva’s father, they realize he’s not there. A note he left reveals what he did and why. And then a man who lives in their building and has always had a thing for Eva breaks in. He talks about the things he’s going to do to her, but before he gets the chance, other armed men storm the hallways and shoot him to pieces through the door. They then bust into the apartment and drag Eva and Cali out to the street.

While all of this is going on, Seargent is cruising the streets. We see him driving around for a while, and nothing happens to him or his car. At the very least, his car would be attacked, even if the attack was unsuccessful. The same goes for the married couple who is hiding in alleys. They would have probably had a run in with someone too. But when the girls are dragged out of their apartment, that’s when Seargent steps up. He sees it from far away, steps out of his car, and shoots down the attackers. Then the married couple comes running out of their hiding spots and jumps into Seargent’s car. When he gets back and forces them out, the group has some words and decides to stay together. Especially when Eva offers Seargent a car if he can get them where they need to go. His car has broken down (boy that seems to be happening a lot tonight, doesn’t it?) To be fair, his car was shot at multiple times. Seargent makes Eva call her friend to confirm that he can have the car if he gets her to her friend’s apartment. And so, like that, they are off and running.

We get a couple of action scenes on the streets, including a subway tunnel chase where the married couple ends up firing at a jeep and taking a couple of hits themselves. After this, the group makes it to the friend’s apartment, where she and her family are spending the night in doors. It might seem like things are safe now, but really there’s family drama brewing and it turns pretty violent. I love the way the movie changes things up, getting our characters off the streets and into an apartment, only to face new and unexpected conflict.

When they get back outside, the group is kidnapped and forced to partake in an auction at a ballroom where the people who bid the highest get to hunt them down in an obstacle course. This is a cool idea, very much like Survivng the Game or Taken meets Hostel. There are some things that could have been thought out better, such as why the hunters don’t wear some kind of armor, or where all these wealthy people are going after the auction. They certainly aren’t going out into the street to head home. Maybe if this scene had taken place in the ballroom of a hotel, it would have been better, with everyone retiring to their rooms afterwards. Still, it’s another cool idea that really changes things up right in the middle of the movie. There could have been a whole film just about this auction and obstacle course (in fact, there have been many versions of it, such as Battle Royale or The Hunger Games.) The fact that this movie keeps finding ways to be creative, bringing our character from the streets, to a families apartment, to this auction hunt, shows how ambitious it is. Even the idea that maybe the government is involved, and using the purge to eliminate poor people in targetted buildings is great. This is a series that continues to build. Apparently there will be a third movie, and I’m really glad to hear that. Being original and creative and looking to build on ideas goes a long way.